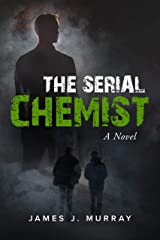 I’m James J. Murray—a self-published author of four thriller novels, six short stories and contributor to four anthologies. I’m very excited to share this article with you on the Authors’ Lounge page. All of my writings include murder, mayhem and medicine in the plots. I often promote myself as Mr. Murder, Mayhem and Medicine. Some would say my novels are plot driven, and they are per se, but each book has a strong protagonist leading the action with a focus of strong character identification.

I’m a retired pharmacist with clinical experience in medication management and draw on that to focus on the lethal aspects of drugs and chemicals when used inappropriately. Before publishing my first work, I started a weekly blog that focused on the good and bad of legal drugs, illegal ones, and chemicals substances. Those early blogs on my website, found at https://jamesjmurray.blog, provided the groundwork for the lethal substances I use in my plots.

My most recent book, The Serial Chemist, is a thriller novel about a serial killer who utilizes several of the lethal substances from my past blogs to disable and kill his prey. The plot of this book, over any of my other works, had been evolving in my mind for at least two years before I wrote the first word of that first chapter. I wanted to create a story about a troubled soul who does unspeakable acts of violence, but in the end elicits strong emotions from the reader. Several who have read this novel told me that they cried at the end—a conflicted emotional response that I was hoping to achieve.

The road to writing The Serial Chemist has been a rather long one, and I think the journey evolved organically through some of my earlier writings leading up to publishing this last book.

My first short story was published in 2013 and my first novel, called Lethal Medicine, was published in 2015. Lethal Medicine featured a past Special Forces character named Jon Masters as the protagonist, a person desperate to leave behind a troubled childhood and a lethal military history in favor of a model-citizen normal existence. When an evil competitor plots to make my protagonist the prime suspect in murder and an international conspiracy, Jon is pitted against a dynamic detective duo who stack the evidence against him.

I have since published a second Jon Masters thriller novel, Imperfect Murder, but I was so enthralled with the detective duo characters from Lethal Medicine that I wrote a detective novel called Almost Dead. That was a murder mystery/thriller spinoff with the same detective duo, Detectives Rosie Young and Vince Mendez, as the protagonists and they were challenged to solve an intriguing tale of two murders. The plot thickened when the victims turn up alive twenty-four hours after their supposed deaths.

The success of Almost Dead with its forty 5-star reviews spurred me to plot another thriller spotlighting these same detectives, again with them challenged to solve unique murders, this time involving the serial killer idea that had been churning in my mind for several years.

The Serial Chemist novel continues to define the Rosie Young detective character as a strong female lead with her partner Vince as excellent support to remind her that detective work focuses on the details. My villain, the serial killer, is definitely criminal but is a complex character with a cunning, but troubled mind, who eludes even the most skilled detective work to leave a trail of victims in his wake.

My target audience for The Serial Chemist are readers who enjoy a keen cat and mouse thriller chase, smart detective interactions, an interest to delve into a damaged mind, and who are open to a surprise ending that will definitely elicit an emotional response. The book is in the psychological thriller genre with the sub-genres of serial killer horror and urban detective.

For this novel, I interviewed several experts—two clinical psychologists, a cyber-securities expert and a legal scholar—to be accurate in what was the factual part of this work of fiction. I also had the pleasure of creating a rather colorful secondary character patterned after a friend who graciously allowed me to expose some of his unusual psyche. This is the first work of fiction that I have interviewed so many experts to “get it right” and I found all to be most helpful to contribute. I now understand that it can take a village of individuals to publish a novel, even when self-publishing. I’m grateful for their support with only a request for a signed copy of the finished book.

The success of Almost Dead and now The Serial Chemist, and how much I enjoyed spending so much time with my Rosie Young and Vince Mendez detective characters, encourages me to continue writing about uniquely-planned murders with unusual lethal drugs and chemicals for my detective duo to figure out and solve. In fact, I have already plotted the next novel in the series and have written about 20% of the first draft, with plans for a mid-2021 publishing date.

As I continue to pursue my desire to write more about the psychological effects of murder and what motivates people to kill, I think there will be several more Rosie Young detective novels in my future. A listing of my current works can be found here: https://amzn.to/2IexJWe.

Now for a bit more about myself, aside from me being an author, I volunteer much of my time and energy to promote health and fitness in my local community, mainly through my volunteer work as a running coach with a local non-profit running club. I find that the success to retirement is to keep my mind active, my body fit and to remain engaged in my community.

My wife and I are accomplished ballroom dancers, a shared hobby that we have enjoyed for over 20 years. We also share our existence with two rather demanding cats.