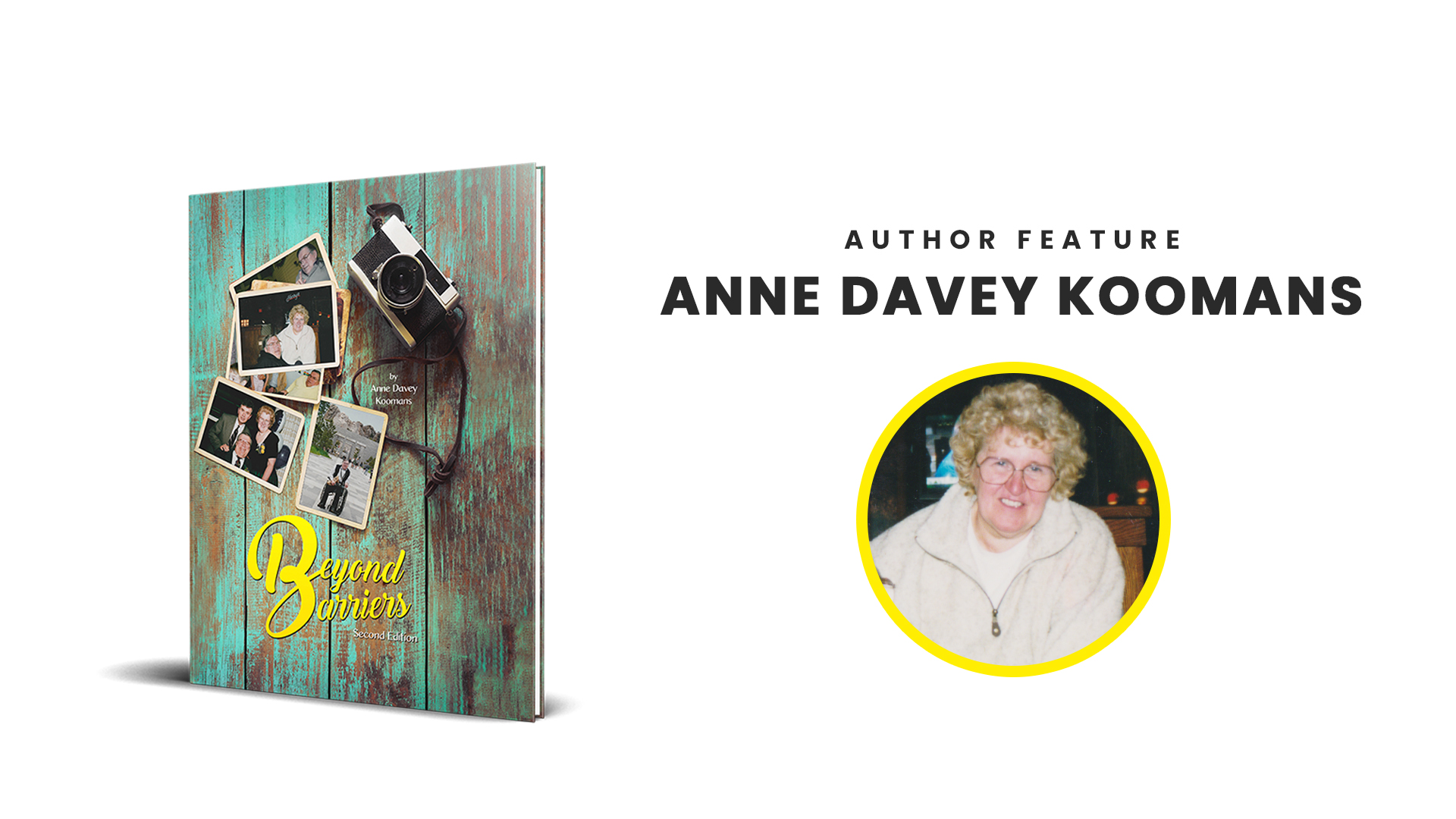 Anne Davey Koomans is the author of the heartwarming David Davey biography Beyond Barriers.

They say that behind every successful man is a strong woman. As we celebrate International Women’s Month, we take time to recognize and celebrate strong women and their impact on the lives of others. Today, we are going to feature the woman behind one strong man that is David Davey. Anne Davey Koomans is a writer, a teacher, a church leader, a mother, and a wife. Her book Beyond Barriers is a story of one woman’s strength, faith, and loyalty. Let us celebrate the life and story of Anne Davey Koomans.

Anne Davey Koomans was born during an ice storm in 1937. According to Anne, the doctor had to drive his horse and surrey to New Richmond, Indiana, her home. Anne is the youngest of six children and is a devout Christian who accepted Jesus Christ as her savior at twelve. As a kid, Anne often sat around the family dinner table, telling stories. It has become a tradition that one person would start a story. Each family member would then take turns contributing a paragraph until someone is able to give the story a proper ending.

This family tradition is perhaps the reason why Anne developed a passion for telling stories. In school, Anne would display her talent for writing, and this did not escape her teachers’ attention, who encouraged Anne to become a professional writer. Since then, writing has been in the corner of Anne’s heart. However, it seems that life has other plans for her.

Family Life and the Church

Anne’s time would be preoccupied with classes and her job. Later, Anne met David, who would become her husband. The details of their courtship and their marriage are featured in David’s biography Beyond Barriers, written by Anne. Her marriage to David would produce two daughters and a son. Together with her commitment to teaching, leadership roles at church, speaking engagements in Christian retreats, and volunteer work, writing took a backseat.

Family and church opened many other opportunities for Anne and David. They were able to travel to many places. These can be seen in many photographs that captured them in many different places, including forty-nine states of America (except Dakota), cruises, and flights to more than fifty countries and islands. Anne has documented their travels from the wheelchair lift on Dave’s van, helicopters, hot air balloons, planes, or lying on her back to get unique shots of lighthouses, Notre Dame Gargoyles, and many amazing moments she shared with her husband, family, and friends.

Anne and David have also been blessed with three granddaughters and two grandsons. For Anne, holding and photographing baby pandas in Chengdu, China, is a special memory she shares with them. Spending time with the family is the most important chapter in Anne’s life.

It took many years for Anne to spend time writing again. In 1994, Anne Davey Koomans received her first copyright for her Christian drama Witness of the Innkeeper. This forty-two-minute drama has seen audiences from many countries, states, aboard ships, and at churches, schools, and nursing homes. Anne has performed Witness of the Innkeeper over 200 times.

In 2016, Anne Davey Koomans published her late husband’s biography entitled Beyond Barriers. The book celebrates the magnificent and inspiring life of David Davey, a polio victim who has changed the lives of so many people through his passion and work. In this compelling work, Anne shares how 12-year old David survived polio after spending nine months in the hospital. Anne recalls David’s years at Wayne State University, where he recognized God had a purpose for his life. She then shares how David spent the rest of his life fulfilling that purpose. David Davey is known for his work with the late Senator Bob Dole on the National Barrier-Free Architectural and Transportation Board which helped develop the standards for the Americans with Disabilities Act in 1990. On a more personal note, Anne shares her wonderful journey with Dave through recollections of their travels, hotel stays, and countless magical moments captured in photos, showing how they made life heaven for each other, despite the many challenges in life.

To know more about Anne Davey Koomans and the inspiring life of David Davey, you can purchase a copy of her book Beyond Barriers or visit her website today.