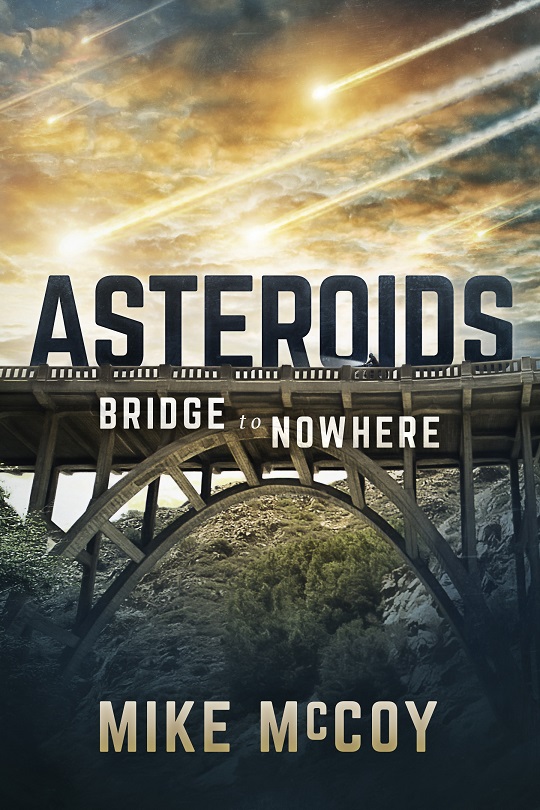 ASTEROIDS – Bridge to Nowhere follows Rick Munday’s struggle to escape from the evil Colonel Cruikshank and his enforcer, Captain Kobalt. Rick and new friends he meets on his quest strive to tell the world about the impending asteroid storm and save as many lives as they can while Kobalt chases them across the country.

Rick must evade Kobalt and cross the Bridge to Nowhere to reach his family while asteroid storms rage, destroying everything around him.

Writing ASTEROIDS checked off a lifelong goal on my bucket list. I had the desire to write novels since I was a twelve-year-old boy at scout camp. I remember making up stories while sitting in an outhouse on a hill with the wooden door swung wide open, staring out at the crystal blue surface of Siltcoos Lake. Those stories have rattled around my brain since that day. Unfortunately, I didn’t start writing seriously until my mid-fifties.

I wrote ASTEROIDS because I felt it was a story I could write to the end. In fact, I worried that the story would be too short for a novel. I didn’t have an outline, just a few kernels of the story, and the ending that played on repeat in my mind. I began writing ASTEROIDS while on a business trip to China. My Chinese host had left me stranded, alone in a hotel room for a three-day weekend. With nothing to do, I started writing.

I’m not overly religious, but the idea for ASTEROIDS hit me one day when I heard a couple of Christians arguing about signs of the end times. I was curious, so I checked the Bible and discovered that asteroids nearly destroy Earth in Revelation 6 chapter 12. That’s well before the events the Christians fought about. You want a sign? When the sky starts falling, that’s a sign!

What if an asteroid storm was headed for Earth, and the government did everything in their power to keep it secret? ASTEROIDS is a science fiction action adventure full of corruption and conspiracy theories, with a pinch of religion, and a dash of science. The book includes technology that is almost here like self-driving cars, augmented reality glasses, blood transfusions that revive an aging Colonel Cruikshank, and more.

There really is a Bridge to Nowhere. The small town of Burwell, Nebraska exists. And rehabilitation drugs are real.

I spent hundreds of hours reading and researching the technology. Two NASA scientists contributed to the story. I sent an e-mail to Dr. Joe Nuth at the Goddard Space Flight Center describing my scientific concept of an asteroid storm destroying Earth. He told me I had it all wrong but explained how it could happen. He helped me write that portion of the book. And I used Dr. Bong Wie’s idea of a Hyper Velocity Asteroid Impact Vehicle to create the Harpoon device that, in the novel, saves Earth from annihilation.

While writing ASTEROIDS, I had teenage readers in mind, but I couldn’t imagine what would happen. When the first draft was half written, I printed it out to see what I had. Trinity Mak was twelve when her family visited one weekend. She saw a three-ring binder with the cheesy book cover I’d made and asked if she could read it. After a week, she realized the story wasn’t complete and asked for more. I had found my muse. I visited the Mak family often, and with each visit I brought Trinity more pages. Her enthusiasm was the motivation that kept me writing. ASTEROIDS ended up being five hundred pages and took me five years to complete. My fear that the story would be too short was obviously unfounded.

I hope ASTEROIDS will entertain readers and rouse their curiosity. If they stop reading to investigate a new technology or find a location on a map, they’ll find the tech is on the drawing board and the places in the book are real. There really is a Bridge to Nowhere. The small town of Burwell, Nebraska exists. And rehabilitation drugs are real.

I self-published ASTEROIDS – Bridge to Nowhere in September 2019, and I’m pleased that interest in the book continues. I was happy to be invited to write this piece for the Author’s Lounge and strangely, I’ve become a frequent guest on radio talk shows and pod casts. It seems all that research has made me somewhat of an authority on asteroids and their threat to Earth. I’ve been a guest on many programs, including Coast to Coast AM, The Leak Project on YouTube, and Night Dreams internet radio to name a few. All I need now is for a movie producer to discover ASTEROIDS and offer me a movie deal!

Since ASTEROIDS – Bridge to Nowhere, I’ve published a short story; OBSIDIAN – Tales of Karanga and am working on the re-write/edit of TAC FORCE – Sons of Khan, which I plan to release in late 2021.

I have always been a hard-working, goal-oriented person. After graduating from the University of Oregon with a business degree in 1984, I moved to Los Angeles, became a salesman and later, an entrepreneur. I started a trading company in 1989 with friends in Indonesia, which entailed that I hunt down any product they requested and sell it to them, and that was before e-mail or the Internet. In 1992, I founded ADS Tech, which sold computer peripherals to mail-order catalogs and retail stores. I became a self-taught techie and quasi-engineer. We created some of the first ever USB devices and our team developed several firsts in the world of audio/video capture and editing products. We built that business for sixteen years and sold our products to retailers and distributors in over forty countries. I find international business exciting. It gives one the opportunity to travel and connect with people all around the world, and a little adventure, never hurt anyone.

You can learn more about ASTEROIDS – Bridge to Nowhere at my website: www.mikemccoy.me.

If you’ve made it this far, you’d better read ASTEROIDS. You can find it on Amazon, at Apple Books and everywhere e-books are sold.