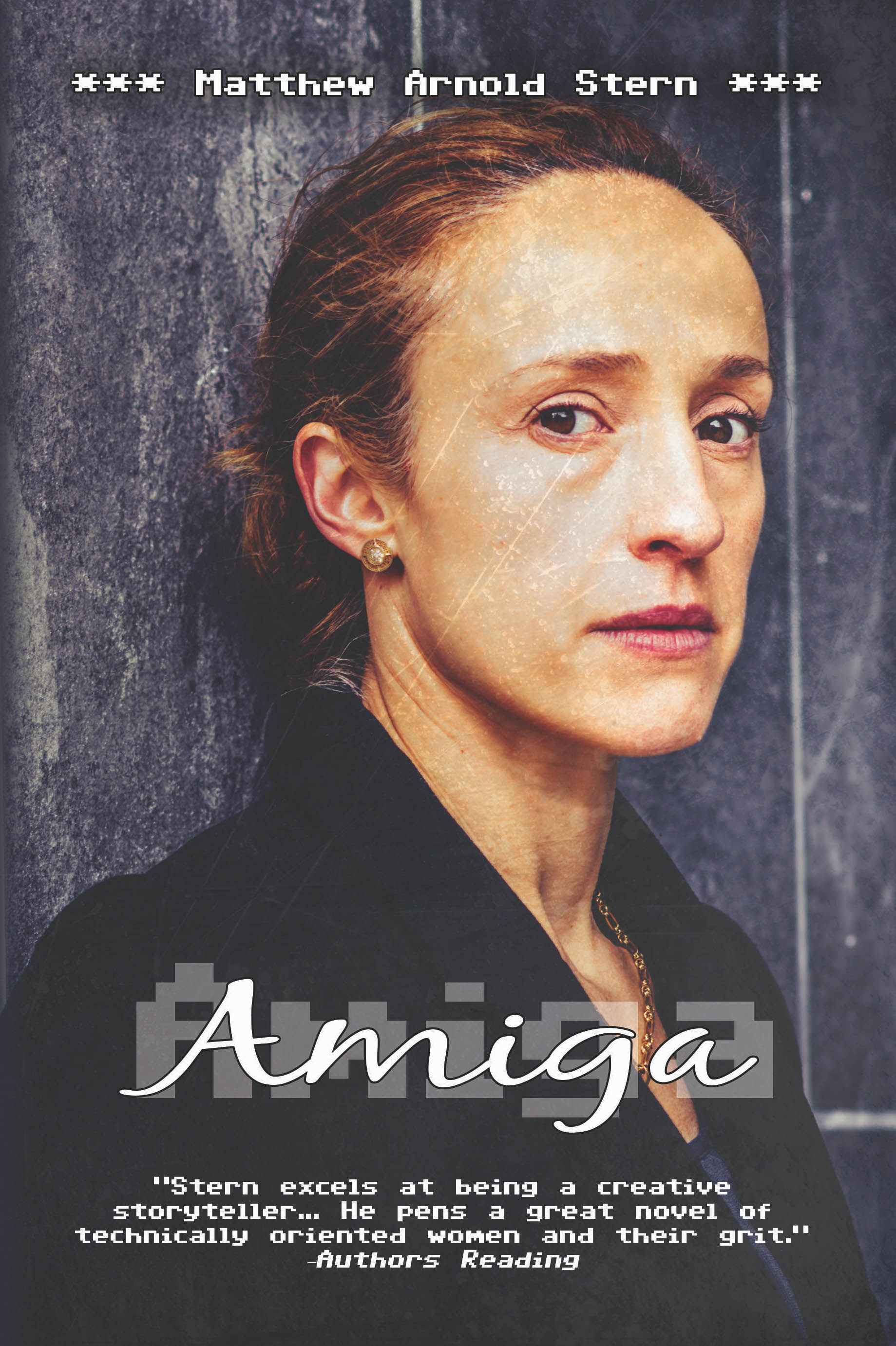 Towards the end of my novel Amiga, one character asks another, “What did you learn from your past?” Facing the past is a theme that often comes up in my novels.

When Jennifer Jackson invited me to write about Amiga for Author’s Lounge, she asked the question everyone asks, “What is your book all about?” I had my elevator pitch ready: Laura is a middle-aged programmer facing family and career problems. To deal with them, she must face a past she’s trying to forget. There’s more to the story, including the experiences that inspired me to write the book.

Matthew Arnold Stern working on his Commodore 128 in 1985.

As a student at Cal State Northridge, I needed to turn an English degree into a paying career. I got a job for a startup software company called EnTech. They created software for the Commodore 64, including a music creation program called Studio 64. I started off writing press releases and then wrote user manuals. After I graduated, I got my first full-time technical writing job at Haba Systems, an early Macintosh developer. From there, I got a job at AST in Irvine. I moved to Orange County where I met my wife and started a family.

The Amiga was one of the computers I owned. I bought a Commodore Amiga 500 in 1987 and had it for a few years until I switched to the PC. The Amiga remains one of my favorite computers. It had capabilities PC and Mac computers wouldn’t have for years, and it was a lot of fun to use.

In the book, Laura describes the feelings I had when I used the Amiga:

Unfortunately, Commodore was a casualty of the computer industry shakeout in the 1990s. Windows became king, the Internet became the “killer app” the computer industry was looking for, and PCs became commodities. Even Apple barely survived that decade. The fall of Commodore still hits computer fans hard. It was the first computer for those of us who got into technology in the 80s and early 90s. The Amiga especially left us with a sense of “what might have been.”

I wanted to write about my experiences in those early days of the computer industry. After several false starts, the pieces came together in NaNoWriMo, and I polished the manuscript over several months with the help of several beta readers. My novel was published by Black Rose Writing in 2019.

I found an early audience with the large community of Commodore fans who continue to own, refurbish, and even create new hardware and software for these computers. One of my first online interviews was with Doug of 10 Minute Amiga Retro Cast. By networking with other authors from my publisher, I met Ella Clarke and Jackie Anders of the WriteOrWrong Virtual Book Club. They made Amiga Book of the Month, and we discussed it in our Facebook Live meetings. (Virtual book events have been lifesavers for writers during this current pandemic.)

My second novel with Black Rose Writing was released in September, The Remainders. It also deals with characters who are struggling with their pasts.

Why am I so interested in my character’s pasts? Part of it comes from writing in first person. This requires me to dive into character development to understand why they make the choices they do. With Amiga and The Remainders, it also has to do with what was happening in my life when I started those novels.

They say art comes from pain, and that was true for me in 2016. We were going through some difficult family problems. These situations forced me to question beliefs I’ve carried with me since my youth. For this reason, Amiga and The Remainders (as well as my current work in progress) take place in Reseda, California, the suburb where I grew up. Reseda is the backdrop where my characters examine their histories, discover how they hindered and helped them, and come to peace with them.

My character in Amiga answers the question about what they learned from the past:

I invite you to explore Laura’s past along with the past of the computer industry in Amiga, available on Kindle and Kindle Unlimited, and in paperback wherever books are sold. To learn more about Amiga (both the novel and the computer that inspired it), visit my Amiga page on my website. You can follow me on Facebook, Instagram, Twitter, and TikTok with the tag @maswriter.