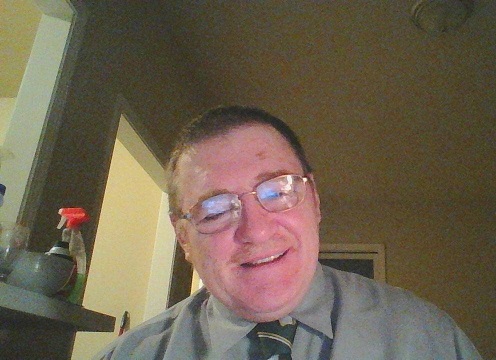 Who is Chris Breva? Marvin D. Schrebe AKA Chris Breva is a storyteller at heart. He began telling stories as a child and has continued to tell them ever since. His mother at first thought his stories were lies and punished him for telling them. As he continued to tell them his mother realized that he was not telling lies, but rather that he had a very vivid imagination. When he began school, his fellow classmates found his stories fascinating and he soon developed a small in school fan club. The first word he ever learned to read was “Go” and he has been going ever since. Chris knew from the time that he read the word “go” in the old “Sally, Dick, and Jane” readers that he was in love with words. The honeymoon continues to this day and his readers reap the rewards.

Chris has been reading and writing steadily since the early mid-1960’s. He was born in 1961 and to hear many people tell it, the moment he was born he asked the doctor for a tablet and pen! His love for fantasy was obvious to his parents at a very young age. His mother recognized that he was not lying to her, but rather had a very active imagination. Fascinated by his stories, his father encouraged him to write and he “published” his first article in a school newsletter. He has since published numerous articles, starting with a Christian tract in 1984 and followed by newspaper articles, magazine publications, and books. The first book he published was Words of Wisdom, which was published under his given name of Marvin D. Schrebe. It was published by Publish America in Frederick, MD. in May of 2003. Words of Wisdom was a collection of inspirational, old-fashioned rhyme poetry. It was followed by a second set of old-fashion rhyme poems called Pathways of the Heart, a collection of poems discussing the various aspects of love. Some of the poems found in both Words of Wisdom and Pathways of the Heart were Christian poems, but all of them had a message meant to inspire the reader into thinking and behaving in a different, more mature fashion.

A college student read both of his first two books and wrote a review of them for a class. In the review the student accused Chris of writing nothing more than old-fashioned rhyme and said that Chris knew nothing about meter or poetry. Chris fired back by writing Styles in Poetry, which he then published with Publish America in 2010. He realized, of course, that neither Words of Wisdom nor Pathways of the Heart had made him a dime because Publish America was a “print-on-demand” publisher, meaning his books were included in their online catalogue, but were not made available to the public on bookstore shelves. Despite that fact, Chris published Styles in Poetry with Publish America hoping the college critic who had ripped him so badly would read it and realize he was indeed familiar with metered poetry. Then to add to his repertoire he published Mid-Ohio Valley Haikus and Tankas later in 2010 with the same publisher.

His experience with the publisher, and the fact that he had made no profit from the books discouraged Chris with traditional publishers and he began exploring self-publishing as an option. He had always viewed self-publishing as negative, thinking it made the author look vain. Traditionally publishing four previous books and realizing that he the publishing company had invested time and money into his work because the publishing company felt it worthwhile, was a shot of confidence for Marvin. He wrote and published in an online website for several years under the pseudonym Chris Breva. He then collected several of his poems into one manuscript and published Styles in Poetry II through Amazon self-publishing, along with Marvin’s Short Stories, both in 2016. Having had a little success with these he was contacted by Red Sanchez at Reader’s Magnet and asked if he would like to republish his works with them. He took Red up on the offer and is now preparing to publish his eighth book with Reader’s Magnet. Using the current working title of Tea Time, the book is a collection of short stories, essays, and other writings that runs the spectrum from Western to comedy, erotica to Christian, science fiction and fantasy. Some of the stories won Chris awards online.

Be sure to check out his blog on Reader’s Magnet and watch for the publication of Tea Time, coming in the summer of 2021!