Weaving the Wyrd – Meet the Author of Tapestry of Worlds 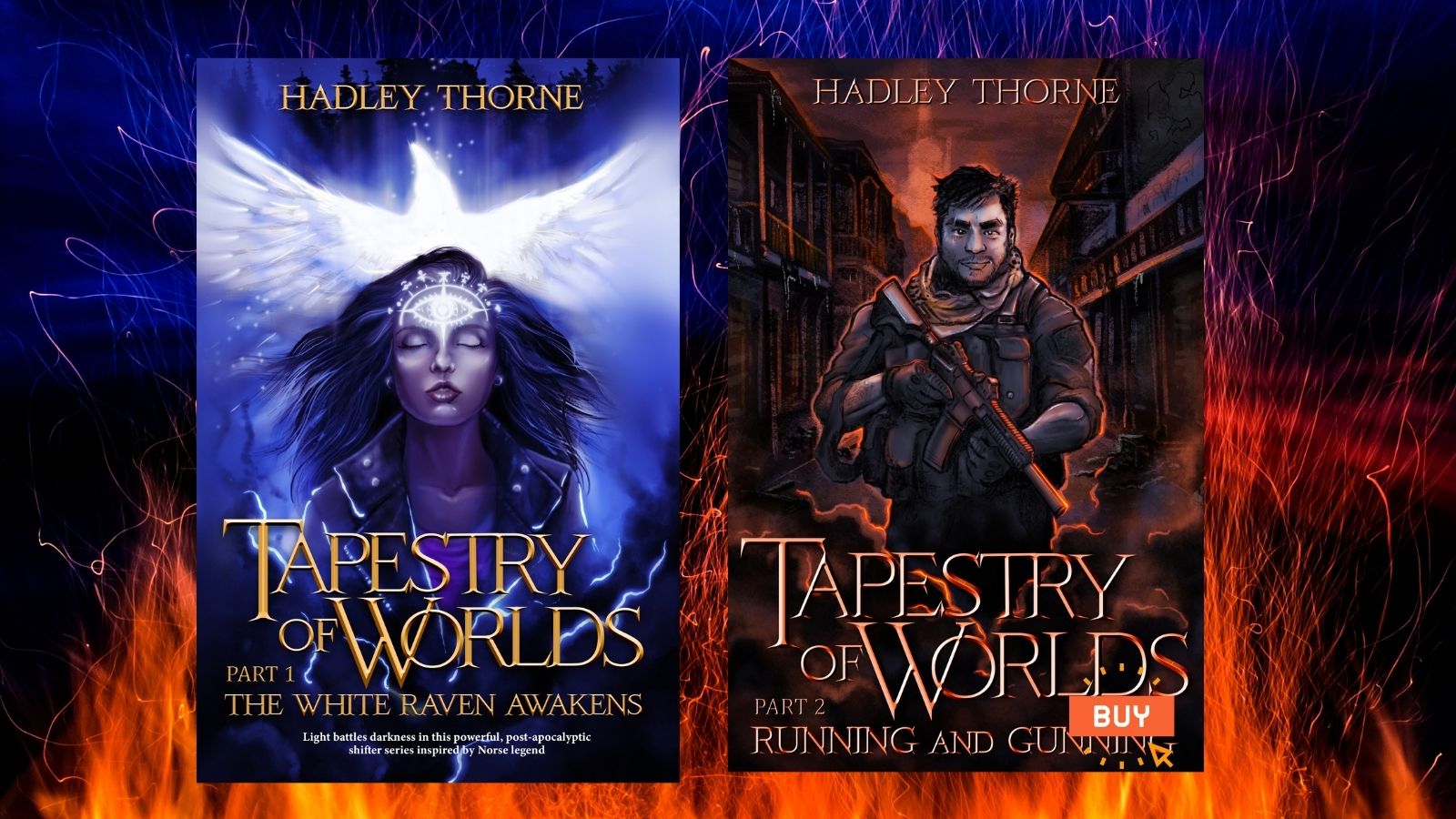 New indie author Hadley Thorne weaves Celtic and Norse myth with legend, mysticism, cryptids, and local folklore to breathe new life into the age-old story of good versus evil. Her apocalyptic series bridges dark fantasy with mythic fiction and introduces the reader into a bold new world where the veil that separates the world of man from the chaos of other comes crashing down, ushering ancient magics into the modern world.

Tapestry of Worlds, Part I – The White Raven Awakens focuses on Erika Lily. Erika and her friends are members of a magical working group unwittingly used by a black souled witch into opening one of the Ragnarök gates and plunging the world into chaos. Caught in the middle of societal collapse, a global pandemic, and her own personal hell, Erika finds herself cut off from her friends, family, and her lover. Having lost her memory and caught the eye of one of the key figures in the cabal behind it all, Erika’s only chance of survival is to convince one of the witch’s evil henchman to help her–but at what price?

Tapestry of Worlds, Part II – Running and Gunning starts with Erika’s boyfriend Green Beret, Jason “Ransom” McIlwain, and the rest of his Alpha Team flying to a Top-Secret Black Ops Base in the Gulf of Mexico. Armed with cutting-edge nanotechnology, Ransom and his team cross the veil between the worlds into the astral realm of New Orleans. There, the team discovers their newfound abilities as warrior mages have turned them into the government’s most elite paramilitary squad. As they embark on their mission to gather intel on the cyber-terrorist known as the Black Queen, they discover the Queen has declared war on all the Crescent City’s preternatural elite as she makes a push for power. While he is uncovering the Black Queen’s plot, Ransom stumbles across intel that Erika is caught in the middle of the Black Queen’s web. Now he must choose between his duty to his country, the oath he took to protect his brothers, and to save the love of his life.

Running and Gunning is the companion book to The White Raven Awakens, not a sequel or prequel. Its timeline parallels Erika’s story, and while each book can be read as a standalone, each offers rich details that enhance the other.

When I started writing Tapestry of Worlds, I did not mean it to be geared towards any one genre. I set out to create a world that could support them all. I felt it would interesting to examine modern people suddenly having psychic abilities or latent powers to see how they would process them. I mean, what would happen today if right now–you realized you could talk to the dead? What if, in learning this, you realized you had been doing it since you were three, and it wasn’t like you thought it was? What if everything is connected, and it is just a matter of opening your eyes to see it?

I see magic in everyday things, people, and circumstances, and I wanted to explore those things with some challenging scenarios driving the plots. Having said that, I admit that underneath all those many layers, the series is ultimately about how certain mindsets can infect you and how societal stress can override and suppress your soul’s growth and true potential. This is what the series is all about – reminding us that everything we need is right there in our souls, no matter what we’re going through.

I want people to get lost in the story for a few hours and connect with the window into the world and the characters I am giving them. I sincerely hope that readers enjoy the story, the characters, buy into their reality, and love them as much as I do.

When I started this journey, I had no idea what I needed to do when I was done writing and I am thankful for resources like the Author’s Lounge for networking and guidance. I am not sure what direction things are going but I have a lot of stories I want to tell. Initially, I had a specific story that I wanted to tell and thought it would take three books to get there. So far, Book One has stretched into three books and I have not even gotten to broach my original inspiration but Erika and Ransom have hijacked me for the time being, So, stay tuned and follow me on Amazon and Goodreads for updates!

Besides writing the Tapestry of World Series, Hadley is the creator and co-host of Wyrd Realities Podcast, where its tag line reads “Wyrd Realities exists where Myth, Science, and Folklore intersect.” In February, the Podcast added the Wyrd Ink Sessions. During these sessions, Hadley and the Wyrd Realities crew speak with fascinating authors, podcasters, content creators, and filmmakers to discuss their work into the wyrd things that capture our imaginations.

You can find Hadley Thorne across social media here: https://linktr.ee/Hadley_Thorne