TWO sons TOO many, Memoir by Aidan Mc Nally 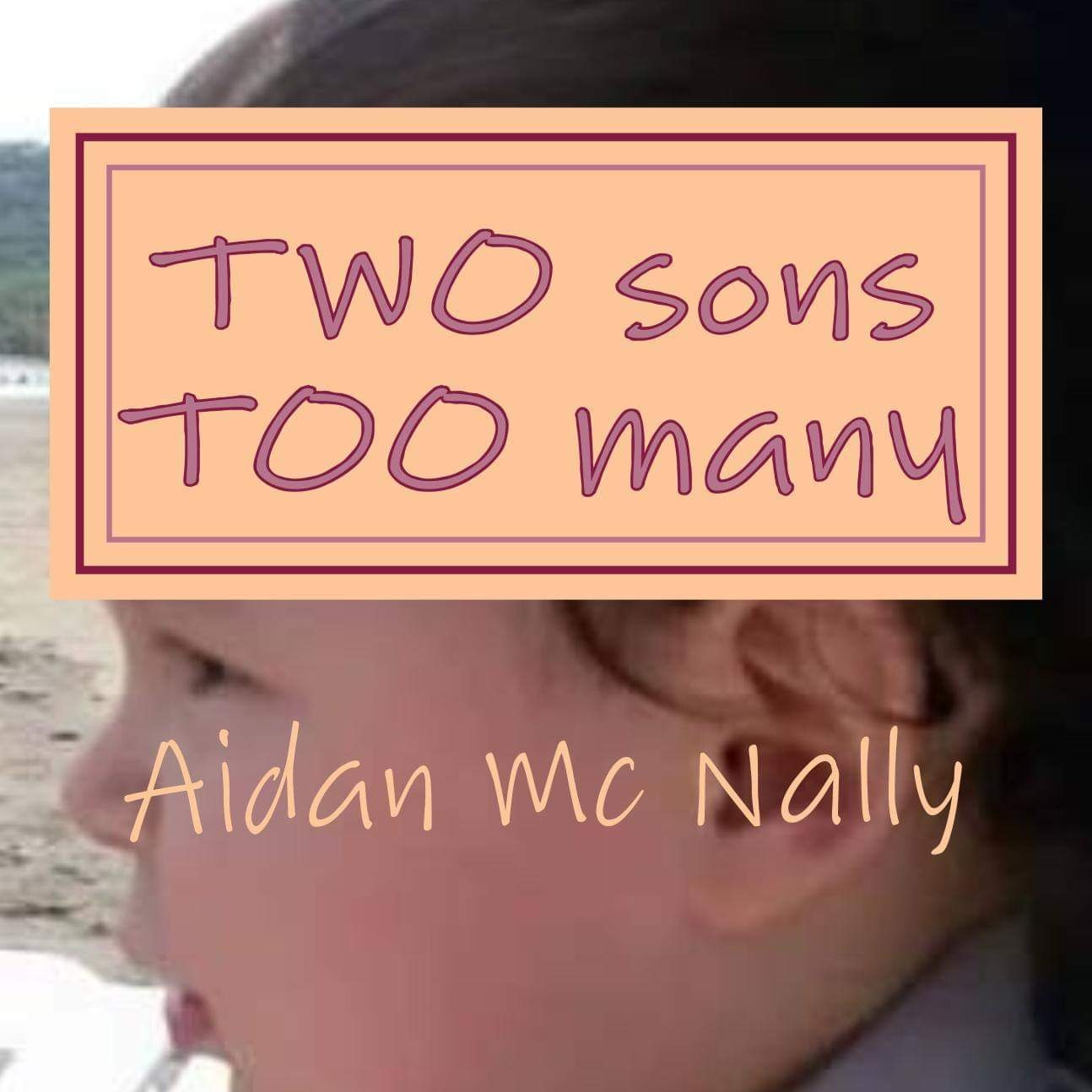 TWO sons TOO many is a life story, my life story. This is a story that you have never heard of before nor have you ever read a book like this. Why so? You might ask and rightfully so. I never thought by making notes as I looked back over my life that a manuscript would be born, let alone ever think it might become a book one day.

The title may deceive a few and that is not intentional at all. I have received comments from random people around the internet of how they totally got it as they “have three sons and a daughter and that they were quite a handful”. One other that comes to mind has been “you should try daughters“.

To keep you from any further suspense, I am young man from Dublin, Ireland. A small fishing village in the more rural part of the county, Loughshinny to give it it’s proper title. By the age of 38, I have had the terrible misfortune to have had to bury my two sons. My eldest son Darra died when he 15 years of age. He did not wake for school one morning and the reason given was a thing called Sudden Adult Death Syndrome SADS, perhaps you may have heard of it. Basically it is to do with the heart just stopping suddenly and is not a heart attack. The heart just stops. My second born son Patrick died from drowning in a swimming pool early one Sunday morning. Patrick was 1 year and 4 months old at the time, he found his way to the pool deck and swimming pool in the very early hours of a Sunday morning.

To lose a child is a terrible blow for any parent, many say “to lose a child is too much”. I have always agreed when I have heard this said. In keeping with this, I often said yes and to lose two is too many. The title became very solid for my story.

What happened around those events and how it all occurred in my own life were quite hard to believe, very hard to process for a father. In just 3 and half fast years, I was a father to a grieving father to becoming a father once again when Patrick was born to a complete shambles of a man all over again. When Darra died I believed my own life was over too and Patrick became my new shining light of hope and enabled me to rebuild as a man and a father inside of my own grief journey. My grieving of my first born Darra who died in December 2011. Patrick was born in February 2013 and I was a very happy though also a sad man that day. Confusing isn’t it? Grieving and sad and happy within. Patrick died in July 2014. The first death rocked me to my knees, my foundations so to speak, the second death was the wrecking ball that shattered all traces of the man I once was. Because I had a very hard time understanding life anymore and for all of the questions I possessed, I was searching for answers. I began to look back over my entire life. What I found was that these were not the only two unbelievable stories that made me who I am. As I searched further back in my life, I kept on uncovering all the unbelievable events of my entire life. I am the man who stood and sat beside two graves and lowered my children to rest, I could not believe it had happened, I found it hard to understand, my therapy became writing. I needed to write my life out for myself to see, I needed to put my emotions somewhere other than inside of myself. I did really need to write and I began.

Even though I have been that soldier in all of the battles through my entire life, the writing of TWO sons TOO many became a little overwhelming for me sometimes. I could not believe it myself.

I had rebuilt myself as a person at a young age when faced with prison sentences and treatment center programs. I became a sober living young man. I experienced Darra being born when I was about 4 years clean and sober. I had always claimed that day to be the best day or my life. By comparison I considered the day my father died to be my worst.

Having grown up in a small fishing village and next to a fishing town it was almost too easy to become a commercial fisherman. A school drop out at 13, I believed fishing would be my profession and I could travel the world, after all 2 thirds of the world are made up of oceans. A sober living young man with an appetite for life I headed west and had the great adventure of fishing in Alaska and the Bering Sea and within a few years I settled in California and was working hard on the Pacific Ocean. These were dreams of mine growing up while fishing in the Irish Sea and the Atlantic Ocean. Dreams that I was able to fulfill.

Life in the United States was full of dreams come true and the twists and turns in my life were adding up to be a far cry from a damp prison cell as a youth in Dublin city Ireland.

My roaming the world and adventures did not stop there and I came to settle again in Costa Rica. This little boy who had thrown it all away in his youth was making up for it all and living the dream. I know, right? Dublin, Seattle, Dutch harbour, San Francisco and San Jose Costa Rica. How does one Irish guy do all this and still live to tell the tale?

There are many funny stories in there too and it is my life.

TWO sons TOO many is like my own personal monument or headstone type thing to my sons and it is for this reason I will continue to build it as high as I can. Do not be surprised when you see it playing at your local cinema one day as this has been many a person’s feedback to me. “when I finished your book I felt like I had been to the movies”.

I am not any person special and I have no hidden strength. I simply had learned some valuable tools when getting sober as a teenager. Such tools carried me through and helped me rebuild again. I will be totally honest with you here and say that there have been times where I have gotten a little sick and tired of having to come through the other side and rebuild over and over again.

I found that through my writing I have touched people and brought to them comfort and hope and I landed into a virtuous cycle. My story has touched and inspired others while they have touched me right back and inspired me to keep writing.

Darra and Patrick will never enjoy the spoils or know how they brought daddy to a whole new career.

You can find me on social media @TWOsonsTOOmany.

Here is a link to my Amazon page where you can find all of my books including my 2021 award winning self help book Layman’s Handbook, in life. A journey to SELF. https://www.amazon.com/kindle-dbs/author?ref=dbs_G_A_C&asin=B01GMP523Q