There’s a Mouse in the Cupboard by Dawn Doig 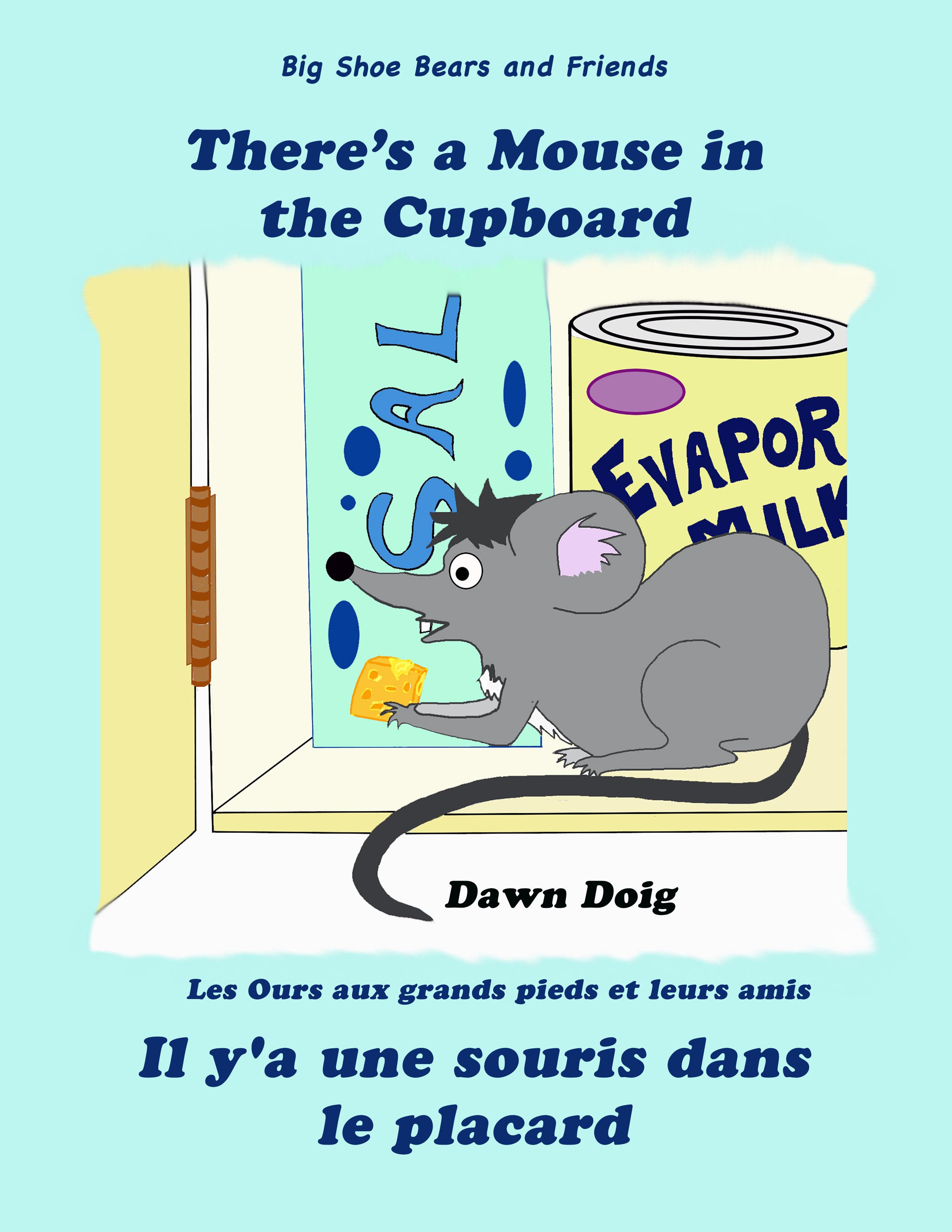 As a career mother with young children, I always enjoyed the quality time I could spend with my son and daughter.  One Saturday afternoon, over 23 years ago, I was busy in the kitchen when my three year old son came in wondering if I could play with him. If my memory serves me correctly, I was in the middle of doing the dishes so I started singing to entertain my wee son.  When I was growing up, my mother sang all the time.  One of our favourite songs was ‘There’s a Hole in My Bucket, Dear Liza’ – a deadlock song in which a character named Henry has a leaky bucket and Liza tells him to repair it. Throughout the song, Liza continues to give Henry advice on how to fix his bucket but in the end the reality is that there is still a hole in the bucket.  I have never been able to find the name of the composer of the song, but it is believed to have been German in origin.  Perhaps my mother was familiar with it because of her Austrian roots?  At any rate, I put my imagination to work and created ‘There’s a Mouse in the Cupboard’ on the spot.  We had recently had a mouse scrummaging through our cupboards so perhaps that was the spur of the moment inspiration? Colin and I sang that song many times over and eventually I sat down and wrote it out.

I sent the manuscript for ‘There’s a Mouse in the Cupboard’ to a few publishers off and on over the years, trying to have it illustrated as a children’s picture book, but nobody expressed any interest.  This past summer, locked in and bunked down in Africa with travel out of the question, I learned how to use Photoshop and illustrated the book with my Big Shoe Bear cartoon characters.  I created the Big Shoe Bears and many of their ‘friends’ when I was 12 years old and childhood friends remember them well. My dream was to one day see them in books and to be able to share them with the world.  Thanks to the support from folks such as the ReadersMagnet Authors’ Lounge, who are willing to go out on a limb and promote the works of ‘yet to be discovered’ authors like myself, my dream of seeing my books in the hands and hearts of more and more children around the globe just might become a reality.

I am fortunate to have found a publisher who believes in me and loves my stories.  When I wrote down ‘There’s a Mouse in the Cupboard’ and started sending query letters to publishers, I did not have a target audience in mind other than those who love picture books.   As an adult, I still love to read picture books.  I have fond memories of reading with our children as they were growing up and hope that one day I will have grandchildren to read with.  Several of my books are written in rhyme (thanks for the inspiration Dr. Seuss!), but this one is unique in that it is the only one that is lots of fun to read along to a particular tune.  If readers are familiar with ‘There’s a hole in my bucket, Dear Liza’ they will pick up right away on the catchy tune.

As a teacher of English as an Additional Language, I am always in search of video resources to use with my students.  During this time of Covid-19, our school went virtual for several months so I had to be creative and resourceful in finding online ‘treasures’ to use with my students.  As I combed the internet, I found many books that have been converted to audiobooks and some have even been turned into short, animated films.  I am in the process of getting several of my books converted to audiobooks, including ‘There’s a Mouse in the Cupboard.   I have had some folks tell me they would love to see some of my books as short, animated film clips.  I think ‘There’s a Mouse in the Cupboard’ would be fun for children to watch as a video or short animated film. I am not sure how to go about this but am researching it now!

A little snippet about me:

I am Canadian born and raised but have spent many years as an expat living and working overseas. I have been blessed with two extremely rewarding careers working with children as an audiologist and as an English as an additional language teacher. My 23-year career as an audiologist took me to different parts of Canada (including way up north to Yellowknife where I travelled to remote communities with the ENT specialists), Kuwait, England, and Saudi Arabia.  My husband is an educator and followed  me around the globe for all those years.  In 2013, I made a career change into education and now I follow him.  First, to Ulaanbaatar, Mongolia and now to Yaoundé, Cameroon, Africa.  We have two grown children who both reside in Canada.  We currently share our home with two very rambunctious but adorable female kitties that we adopted in Cameroon.  I get my inspiration for my children’s books from our family, the children I have had the pleasure of working with, general life experiences, and our sweet feline friends.  I am a passionate baker and love to share my homemade goodies with others.  I get just as much joy out of seeing people savour my homemade creations as I do from creating them!

I want to thank Elizabeth Schultz and the ReadersMagnet Authors’ Lounge for reaching out to me and expressing an interest in my books. The support is greatly appreciated.