The Unadjusteds by Marisa Noelle 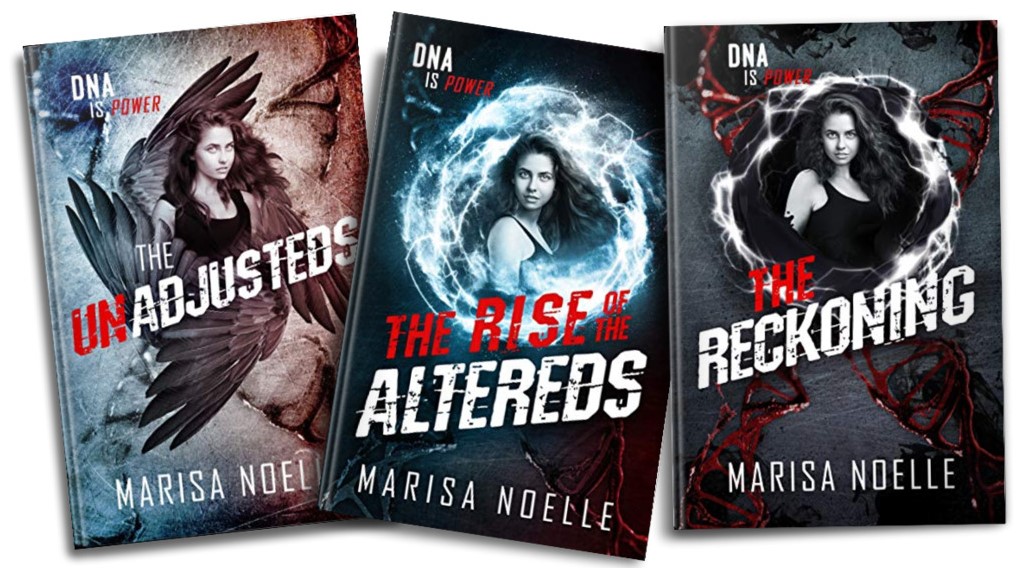 Hello everyone and thank you to the Authors’ Lounge for inviting me to tell you all about my book, The Unadjusteds, the first in a trilogy of the same name, and why it was important to me to write.

The Unadjusteds is set in a near future dystopian society where 80% of the population has altered their DNA by ingesting a nanite pill. With DNA harnessed from animals, super speed, teleportation, invisibility, extreme strength, armored skin, and many other abilities are possible. There are also the mental traits such as telekinesis and off-the-chart intelligence. The President declares that all unadjusteds (those with pure human DNA) are to take a nanite pill. We meet 16-year-old Silver Melody, daughter of the scientists who created the nanite pill. With her mother in prison for treason for refusing to create any more nanites, Silver and her father must flee the city. But the president has an almost immortal army and puts hellhounds on their trail. When her father is captured, it’s up to Silver to band together with a group of unlikely heroes to make a stand. If they fail, humanity as they know it will be lost forever.

I’ve always loved science fiction and wondered about the future of our world and people. When Dolly the Sheep was cloned in the 1990s, I was fascinated by the process and asked myself lots of big questions. Did it have a new personality? A consciousness? Did it think like a sheep? Was there anything different about it? I couldn’t stop thinking about it.

I studied biology at A-level and got my first introduction into genetics, and continued my fascination with the human mind with a psychology degree. The possibility of designer babies came about in the news and hooked me deeper. The idea that you could not only rid a fetus of diseases such as sickle cell amenia or Down’s syndrome, but could go further and choose eye and hair color. I began to wonder what our world would look like if this went unchecked. Where do you draw the line? Who draws that line? What possible ethical boundaries are needed and might be broken? In contemplating these questions, The Unadjusteds was born.

It was also important to me to not just have a cut-out kickass female heroine with no weaknesses. As much as I love Marvel movies, it annoyed my how strong Captain Marvel herself is. Where is her weakness? What does she need above all else? What can slow her down? Not much! In The Unadjusteds, Silver suffers from anxiety and panic attacks. She experiences crippling self-doubt. I wanted her to be relatable to teenagers today, to see that a book’s “superhero” can still struggle with mental health. And that it’s okay to have a mental health problem. The Unadjusteds highlights that you don’t need to be fixed, that you can still kick some ass with baggage. Mental health is hugely important to me and I try to address it in all of my books.

There’s also relationships to deal with. Silver’s mother is in prison and she doubts her every decision. She has to face her own prejudices and grow and adapt as situations take her by surprise. And of course there’s the obligatory love-triangle (grin), but it never overshadows the central plot or themes. But it’s not just about issues, it’s a fast-paced, high-octane, suspenseful read and I’d love my readers to race through it and not be able to put it down! (and leave me some kickass reviews too! 😊)

The book is aimed at the young adult audience. I wanted to get teenagers thinking about the ethical debates behind genetic engineering. What laws and rules we might have to put in place before practices became common. Also, if you’re anything like me, it’s not just aimed at teenagers! It’s a great crossover book that will appeal to fans of The Hunger Games, Divergent, Delirium, Maze Runner or Shatter Me.

The Unadjusteds is followed by two more books, The Rise of the Altereds & The Reckoning, which will be released May 6th. I’d love to see the book become more popular out there, and who knows, wouldn’t it be amazing if Netflix came knocking? I did have film producer interest before COVID, but things have now slowed down (understandably), but I couldn’t imagine anything better than seeing The Unadjusteds on the big screen. #thedream

And here’s the part of the article where I’m supposed to talk about me. (cringe!). Here goes…I struggled with anxiety from my late teens and it took my years to get a grip on it. Books can take me away from it all, writing is my therapy. I also love to swim and do Pilates. All of these things help to keep my mental health in balance and it’s become really important to me to help our teenagers (and adults) face their own issues, to live with them in harmony.

You can read the first chapter of The Unadjusteds here: https://www.theunadjusteds.com/freechapters

And the first chapters if all my other books are available on my website at: www.MarisaNoelle.com

If you want to chat books or mental health, or ask for writing advice, or just say ‘hi,’ I’m usually hanging out on Twitter as @MarisaNoelle77

Thank you for reading and I hope you’ll check out The Unadjusteds! 😊