The Russian Madhouse by Rick Badman 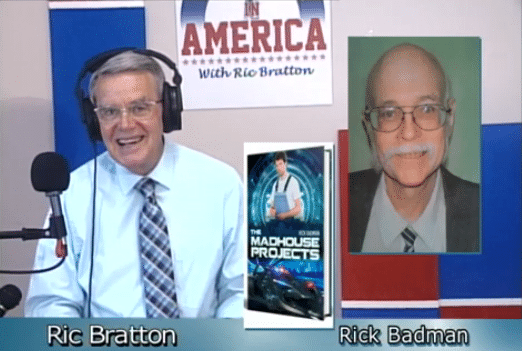 The Russian Madhouse takes place early in 2040 in Siberia at an underground research and development installation that was once a WW II factory.  The people who work there resent it being known as the Russian Madhouse, so they normally call it the Facility.

Dick Thurman and his wife Kate fly there in a flying car and settle in quickly.  Kate works on a device called a companion brain to aid in learning for children while Dick works on a flying limousine for the Russian President, Dmitri Kursolov.  The President visits the Facility to view the weapons being tested but sees more than he expects.  In the medical department known as Frankenstein’s Laboratory, Dr. Sorchen Vlandner shows, him enhanced humans while Dr. Trachel Hovernan shows him a formerly dead soldier that has been brought back to life as a soulless warrior willing to do whatever he is told to do without question.

The President is also there to see Dr. Maria Davidoff fly to the moon in a space plane of her design.  The next day, Dick, his wife Kate, and Maria head for Mars in her space plane but were intercepted before they reach the Red Planet by the ACE starship Aremulac and are taken to another planet for a treaty signing.  On the way there, the trio from earth experience programs that feel more real than life itself.

Eventually, the trio reach Mars where Kate’s cousin, Vladimer Premakoff, finds out his ancestors came from Mars and settle in Siberia when he enters the underground city of Janvuor where he also learns they want him to represent Earth.  He also marries a beautiful woman who will be a mediator to help him deal with people from earth as the deal with people on Mars.

A Chinese spy that Dick knows about thanks to a watcher keeps track of what goes on in this dimension from an adjacent dimension.  The spy wants to steal technology and send it back to China.  He almost steals the flying limousine to bring back to China, but Dick manages to rig it to fly toward Moscow and the spy needs to jump out before it can take him there.  He thinks he is escaping, but a vertical lift vehicle that has Chinese markings on it but is manned by formerly dead soldiers and dies in a crash intercepts him.

Kate has problems with Boris Shenova who is called Mr. Channel 10, which is a channel that features adult programming.  He is a pornographer who makes a living producing pornography and Kate, Maria who use to be a nude model before she became a Christian and a rocket scientist, and Dollia Vlandner who is an android ballet dancer married to Dr. Vlandner, meet with Boris and convince him to stop exploiting them and others in his pornography.

Toward the end of the book, President Kursolov wants to start a war with China so he can use his weapons from the Facility to fight the war.  However, he is replaced by a biosynthetic replicate that Dr Vlandner and some watchers develop before the war can be started.

Cooperation Enterprise started by President McKinley in 1897.  Dr. Vlandner practiced in the

Newgate Municipal Hospital where he met his future wife Dollia.  The star ship captain of the Aremulac was a pilot during the Korean Conflict and joined ACE in the dead of night while in South Korea.  He was rejuvenated in Newgate, New York at the hospital in the rejuvenation chamber that has been nicknamed the coffin so that for the rest of his life he will look and feel his optimum age.  He is actually 106 but looks like he is in his late 20’s or early 30’s.

The book The Martian Connection that will take place within a few years after The Russian Madhouse will follow the book.  It will be when people are traveling from Earth to Mars by teleportation as well as space plane.  Nevertheless, there are discoveries on Earth and Mars that show they have unknown ties.

Technology also has a major role in the book when the Facility tries to adjust the climate of the earth and Mars with expected consequences.  About a century before it was supposed to happen, the Kuyper Belt is opened for development and America, Russia, and China battle each other for control of the Belt.  With ACE and alien worlds involved in the belt along with the three most powerful nations of earth and Mars, the action will be stepped up.  I don’t know what will happen because I haven’t written it yet.  I’m looking forward to writing it whenever I finally get around to it.

If I had written The Russian Madhouse last year, it would have been a totally different book.  It might not have been as exciting either.  I have some ideas for The Martian Connection.  However, they could change at any time.

The Russian Madhouse, if it were made into a movie, might have to be rated R since there is a little nudity in it.  However, it is tasteful.  There is no bad language.  The third book in the series could have even more action than what occurred in the first two books.  I won’t know until I write it.