The Outlander War takes you to the shores of Avalon 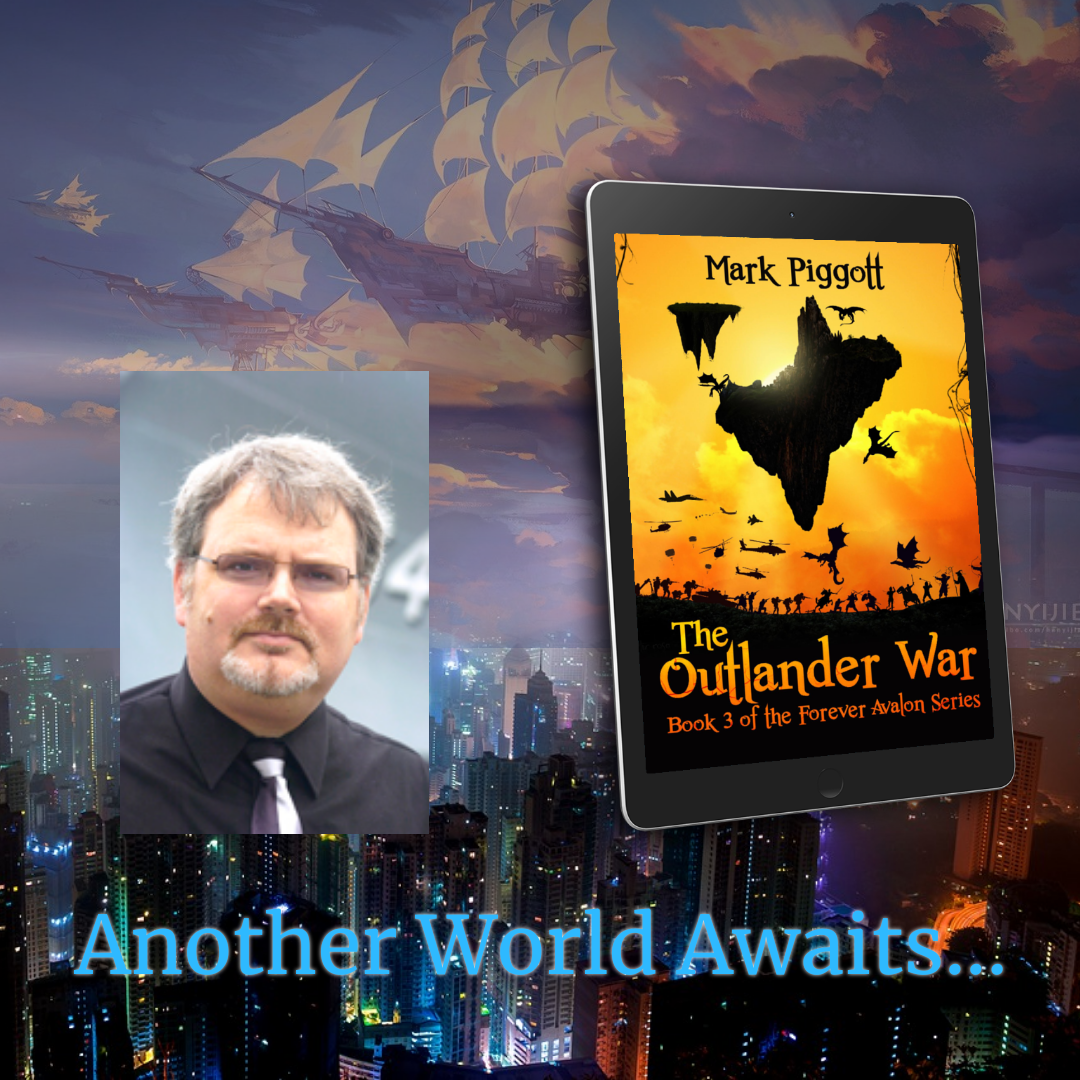 THE OUTLANDER WAR is the third book in the FOREVER AVALON fantasy book series from award-winning author Mark Piggott. The Outlander War won the 2021 Firebird Book award for fantasy from Speak-Up Talk Radio.

When the island of Avalon reappears in the middle of a U.S. Navy exercise, it causes chaos on both fronts. World governments want to know what secrets lie on the mysterious island while the people of Avalon want to keep the “outlanders” off their sacred home. Negotiations falter bringing war to a place where the laws of magic supersede the laws of science. While conflict rages on all fronts, an ancient evil stirs within Avalon to uses the chaos to seize the throne of New Camelot.

The Forever Avalon series takes a “what happened next” approach after the death of King Arthur. Arthur’s death was seen as the end of magic in our world, so I explained how that happened through Merlin and the power of Excalibur. All magic was removed from our world and brought to the island of Avalon, hidden behind a barrier. Plus, bringing in myths like the Bermuda Triangle and the disappearance of ships and aviators (finding their way through the barrier to Avalon) adds to the mystery. All of this experienced through the eyes of a modern family makes my story unique.

In fact, the story revolves around family… One family’s adventure in a world of swords and sorcery. The story developed from my deployments in the U.S. Navy, being separated from my family. I played a lot of Dungeons and Dragons as a young adult so I would dream about being with my family on a fantasy island. That dream changed as my family grew until my last deployment in 2001 when I decided to start writing it down and developed it into the story of Forever Avalon. After I finished writing it down, I stopped having the dream. It was fate, meant to be.

Fantasy is my regular genre, mostly because its been a part of my mindset since I was a teenager. I fell in love with fantasy, magic, dragons and more through J.R.R. Tolkien, D&D and probably every fantasy movie that came out in the 80s (Conan, Krull, etc.) I don’t write anything that a young adult couldn’t read, so high school and up. Anyone interested in contemporary fantasy would be interested in my books.

Since all the book fairs and festivals were cancelled in 2020, I couldn’t do any marketing when my third book, The Outlander War, was released in February 2020. I spent the last year under COVID polishing two novels and working on a third. I have a new series, The Last Magus: A Clockwork Heart, coming out from Lulu, and the fourth book in the Forever Avalon series, The Prometheus Engine. I entered two short stories in writing contests, and they are being published this year in anthologies. “Demonfall” was published in April in Of Distant Worlds fantasy anthology from The Publishing Room. “Corsair and the Sky Pirates” will be published later this year in a steampunk anthology from Crystal Peake Publishers. In addition, I am taking “Corsair” and turning it into a full novel. I love how steampunk blends modern technology with Victorian sensibilities. It’s a new genre and I’m excited to try it.

A native of Phillipsburg, N.J., I enlisted in the U.S. Navy in 1982, beginning a 23-year career. I served on four aircraft carriers and various duty stations as a Navy Journalist before I attained the rank of Chief Petty Officer. I retired from active duty in 2006. I currently live in Alexandria, Va., with my wife Georgiene. I work as a writer-editor for the Department of Housing and Urban Development.

You can find more about me and my books at my website,