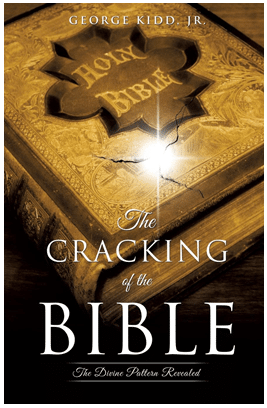 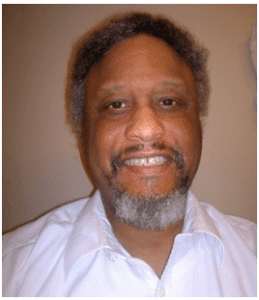 To say that I have discovered the true origin of the Star of David, or the Hebrew name Magen David, is a bold claim to make. This is a claim that could not be made until after some research and analysis in part. To go on to say that this symbol’s basis is in the days of creation as describe in Genesis chapter 1 should be more intriguing. There are those who may say that this could have been done before and it has been lost in history. If so I would say today it has been rediscovered. There are those who have stated over time that pagan gods and other occult practices that used the symbol were the basis for the Jewish symbol of ancient times. Based on my analysis I clearly dispelled that notion. Here is the stark evidence to prove what I discovered.

There was an image I found on the internet of the triangle with the four letter name of God (YHWH), Yahweh, in Hebrew within it that in part assisted me in coming to the conclusion and very useful with my discovery. I had seen it used in some Jewish documentation and other places such as a building, and its gate, in a village in Italy. Here is what the symbol looks like below:

There is a Greek term that is used for the six Days of Creation. That term is Hexameron. For this activity one could also say the Emanation of the world, as told in Genesis chapter 1. To begin here are the days activities described in some detail.

On the first day, “Light” was called for the earth which “…was without form, and void”.

On the second day, the “Firmament of Heaven” or the atmosphere for the earth was created. Both of these two days are related or linked to creation in and of the heavens as established in verses 1-8.

The third day dealt with the “Seas” and “dry land” and the creation of trees and plant life/vegetation in verses 9-13 or work that was done on the earth.

On the fifth day it deals with the creation of other life in the seas and in the air i. e. fish and birds respectively in verses 20-23.

On the sixth day it deals with the creation of “beast of the earth after his kind…” and other life for the land along with man which was created in verses 24-31.

Based on my analysis both triangles incorporate both activities of God’s work in the heavens and on the earth being interwoven and creating the hexagram. I can say the hexameron can be combined with the hexagram. As I see the pattern of the days of Creation, days 1, 2, and 4 relate to the creation of and in the Heavens with Creation days 3, 5, and 6 relating to the Creation of Life. The summary of what God had done is stated in Genesis 2:1.

Below are the triangle diagrams depicting the Days of Creation: 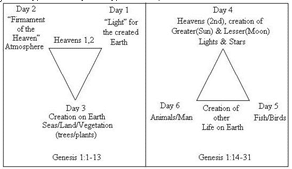 The two triangles combined in the following manner forms the symbol that is known as the hexagram and the symbol of Judaism: 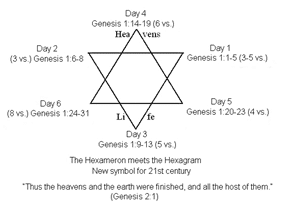 To be sure that my analysis was correct I looked at the symbol as two halves. A top half and a bottom half and the numbered days of those halves. The following is what I concluded:

There are those who may say that the hexagram symbol, relating to Jews, was not in existence in ancient times. One would point out that there is the story, or legend, of King Solomon having a ring that had the hexagram as a design in it and given to him.  If this story is true then it was in use in ancient times by at least one person.

If there are those who think that this is not the true origin of the symbol then I challenge you to come with something better. No one in human history has even come up with what I have done in my view. The precise origin of the Judaism hexagram symbol has now been revealed some 6000 years later or close to it based on the Jewish calendar. This could have been revealed or discovered a long time ago but it is given now. Details as to why I have chosen to display the diagrams as I have it is explained in my book mentioned later.