The Mary White by Gillie Bowen 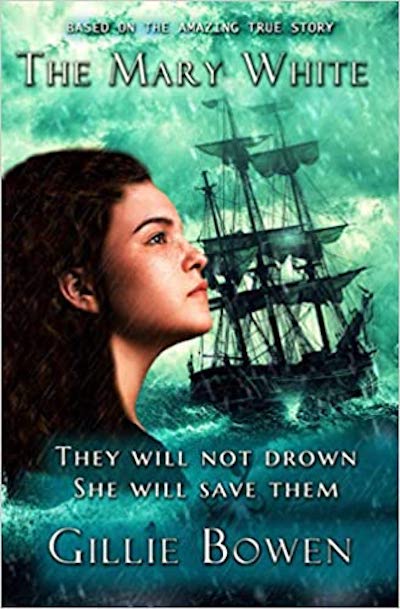 For the millions of readers who love the glamour, excitement, action and hardship of historical tales, The Mary White will tick all the boxes. If a story is based on real-life characters, it makes it even more poignant and believable. Submerge yourself in the drama of shipwrecks at a time when sea-going vessels relied only on sails to combat the violence of a coastal storm. Immerse yourself in the dangers of smuggling when the ultimate penalty was the gallows. Pour over the enticing world of fashionable Georgian London and prepare to drown in its blood-thirsty punishments and entertainments. Engulf yourself in the male-dominated hardship of a woman’s life in the eighteenth century. Wallow in the history of rebellion and war as this fast-moving, action-packed story has you reading well into the night. Readers Magnet Authors Lounge is featuring The Mary White because this discerning group understands the power of a true-life historical story.

The Mary White by Gillie Bowen

Born into a long-established family of boatbuilders in Broadstairs, Kent, Mary White is a rebellious teenager who is as passionate about the sea as her father. The Goodwin Sands, a treacherous stretch of sand which lies six miles off the coast of Kent in England, claims the lives of thousands of sailors. In 1741, it is John White’s ambition to design a unique rescue boat to save the crews of floundering ships. Mary spends every minute she can helping at the boatyard, much against her mother’s wishes.

In the early eighteenth century, Thanet is a hotbed of smuggling. Wines, spirits and tea are brought in illegally from France on small boats, and most local fishermen dabble in the game. Headstrong Mary becomes caught up in smuggling for the notorious Hawkhurst Gang with Stephen, her first love. The penalty for those caught by the Customs men is death by public hanging. Following a daring escapade at sea, Stephen is forced to flee. Mary aids his escape by arranging for him to go to war with her brother, aboard HMS Victory, The Royal Navy’s flagship. But in late September 1744, returning from a successful mission in Spanish waters, the ship sinks in a storm in the English Channel and all hands are lost.

School over, Mary learns to build and design boats. She is involved in the build of a racing yacht for the son of a famous London economist, who falls in love with her impetuous nature. Anxious to get away from the restraints of family life in rural Kent, and believing the love of her life has drowned at sea, Mary marries him.

Will Mary’s marriage bring her the happiness and freedom she craves? Or, as lives continue to be lost at sea by ships wrecked along this notorious coastline, will Mary be drawn back to the sea? What will the future hold for this brave and impulsive girl, who refuses to conform to the traditions and restrictions thrust upon the women of her time?

Set against a background of war with France and the Jacobite Rebellion of 1745, led by the infamous Bonnie Prince Charlie, this true story moves at a fast pace through an uneasy time in British history.

A retired journalist from Kent, England, Gillie Bowen lives in the Loire Valley in France. She is the author of four historical novels, all based on her real-life ancestors. Her work is meticulously researched and all the major players in her books are real people who lived, loved and suffered the hardships of their times. She is currently working on the story of another member of the White family, whose life was dramatically affected by the horrors of smallpox. With the world currently in the grips of a life-threatening pandemic, it is easy to relate to Tom White’s predicament, and his monumental decision to dramatically change the lives of his three children forever. White on Wight will be published in September and readers of The Mary White will not be disappointed. Gillie Bowen is also the author of two cookbooks based on the French delicacy, the amuse-bouche. You can read more about her work at her website: gilliebowen.simplesite.com