The Librarian at the End of the World by Mark Miller 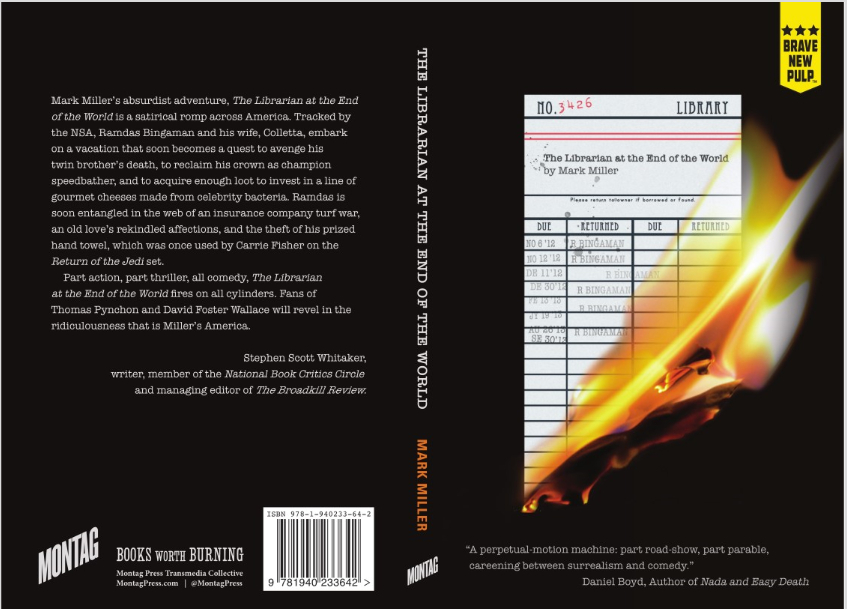 Inspired by true events, this novel delves deep into the underground sport of professional speedbathing. Though mainstream media will not show nude bathers, with the freedom of the internet all things became possible. In fact, the sport was sweeping the globe until the pandemic sidelined things.  Along the way, this novel shines an unsparing light on the inner machinations of the deep state as well as a cabal of Viking insurance salesmen who threaten our very existence. Most people don’t realize that Ragnarok is an actual thing that is really going to happen, but global events are pushing us ever closer to that great mead hall in the sky. The time will come for us all to choose a side in the great war, and this book will help you prepare for that important decision.

My ideal reader is someone riding on the Titanic who realizes that it is our solemn duty to mock the captain, the crew, the ship, the passengers, the iceberg, and the ocean. Because I bet once the life boats had all departed, the remaining passengers were in need of a good laugh to take their minds off things. This is just to say that the law of averages holds that one day we will elect a president named Captain Pepperoni, and there is nothing we can do about it, so enjoy the ride. The Locust Review once asked me if I ever thought that the world would become so absurd that it could no longer be satirized. I am not sure, but the question keeps me awake at night because the terrifying thing is how plausible things can seem.  I thought it would be hysterical to write about people stealing celebrity bacteria to cultivate designer cheeses with them.  In the time between acceptance and publication, a museum in the UK actually had an exhibit of celebrity cheese.  I like to think I am a visionary of fever dreams.

The point for a lot of people is to sell a lot of books, but that has never been the most important thing to me. The world is weird, and it’s my duty to make fun of it, and that’s all I know how to do. If 100 people read it, and one of them says, Hmmm, I think a pansexual country western star would cause some incredible cognitive dissonance, you guys learn some country licks, and I will work on my stretching exercises! then I’ve succeeded. Fortunately, reviews have been extremely positive, except for one reviewer who compared it to Lovecraft becoming a Beat and dropping acid. I don’t think she meant it as a compliment, but I would be hard pressed to find a more ringing endorsement.

I am at work now on a new book, which is a romance novel about a set of conjoined twins, the sentient CPU of a missile silo who falls in love with a fax machine at the Pentagon, and two soldiers living in an underground bunker who must grapple with their growing sexual attraction. It’s kind of Hallmark-y, I know, but I like to think I can bring something new to an old idea. In my non-writing life, I am a librarian and a father. My children describe me as “lame.”

I would like to thank Author’s Lounge for the delicious pot of squid-flavored jam they sent me for doing this interview.  Who knew squid could be so improved? Also, I very much appreciate their attention to my work and will remain forever grateful to them.