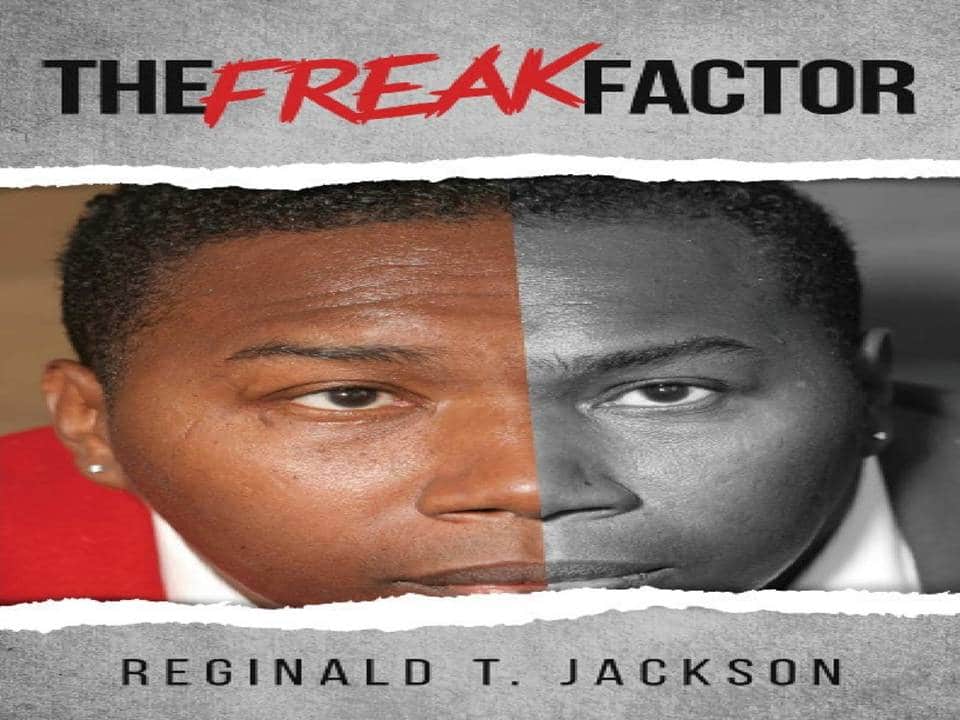 THE FREAK FACTOR is a Memoir from Reginald T. Jackson and that is raw, gripping and intimate as a story about life, love, gender and sexuality.  It follows the human being named Reggie but has more of an edge because this Reggie had his/her life  turned upside down at the tender age of seven years old?  What is it like to live your life for 15 years not knowing if you are a boy or girl?  Does Reggie  become Regina?  No one could solve this riddle of life. The world keeps turning and you are stuck in the Freak Zone trying to make sense of your life or at least make it through the day.  There is danger and violence and embarrassment and condemnation all living right around the corner.  No one would blame you if you decided to live your life under a rock but you wasn’t  ever told you had that option to do that,  so you stand and face day after day after day of this crazy existence.

FREAK FACTOR  adds a diagnosis of Kallman’s Syndrome for Reggie/Regina; which is one in ten million, comes the realities of  schizophrenia, major depression, being told at age 7 he would be a homosexual  and the tender discovery  of  same sex attraction in the height of the AIDS crisis. Along for the ride is being raped to be deliberately infected with HIV infection,  and the riggers of one on one relationships with men; one not to different from the next,  all bad news and then some. A wan bee Porn star, a Crack Head and a Fruits of Islam Muslim/thief. The journey to find love and acceptance turns into the road less traveled with many forks on the way.  The only thing that keeps Reggie/Regina  sane is the daily battle to avoid the label of FREAK from the world around them.

FREAK FACTOR  SNIPET FOR READERS: When I finally got off the train I saw a man at the train station and it turned out to be my stepfather’ best friend whom was called “Georgia boy”. He asked me if I knew where my brother was and I said I didn’t know. He said get in I am headed to your house. I thought ok great but instead of taking me to the house he drove around for about one and half hours until the sun went down and we was cloaked in darkness. I was talking non-sense because fear took over me. My instincts told me that something was going on wrong. Sure enough Georgia Boy decided to park around the block on 150th street in the dark and the proceeded to start talking about sex to me as he tried to undress me. He kept telling me how he wanted to touch my dick and put it in his mouth. He started by pulling down my zipper and then my pants to my ankle. Then he pulled out my dance belt, and pants and again pulled them down to my ankles. He was furiously trying to reach my underwear.  when I saw someone walking down the street and boldly  I screamed out : “I think that my brother right there”. With that quick statement the words  startled him long enough for me to kick the door and it opened. I jumped out of the car and I pulled up one layer at a time my thermal underwear and then my pain and I told him I had to go home. It was like I was walking in slow motion, like the force of the earth was unique and pulling me backwards as I was trying to move away.  I was breathing so hard my mouth as a gape as I was  walking towards my house.  when I got home, I knocked on the door.  I was ready to try and tell my mother what was going on ; how he tried to molest me. When she opened the door it was obviously she was having a party so when  she asked me what was wrong with me I told her:  “nothing”. I went into the bedroom and cried my eyes out until I fell asleep.

Mr. Jackson is considered the Tina Turner of writing because his stuff is “Nice and Rough!!!! Mr. Jacksons,  In 1994 was named a National Shakespeare Pioneer by the New York Shakespeare Festival of the Joseph Papp Public Theater for HOUSE OF LEAR. He has also received a New York City Mayor’s Citation and a Arts and Cultural Foundation Award for his work in Arts-In-Education — teaching creative writing throughout the New York City School System. His play “ STRAIGHT BOYS”  was named the best gay play of the decade by the New York City Gay Cable Network. He was commissioned to write and direct a musical on the life of Aretha Franklin, “ARETHA: Queen of Soul” by the St. Pauli Theater of Hamburg Germany, and a musical based on 70’s R&B group, The Emotions, BIGGER THAN BUBBLE GUM, for Lincoln Center. His play, LOVESICKNESS has been used as a teaching tool at NYU.  His Books THIS MORNING I WOKE UP BLACK  and HEJIRA: From Cradle To Grave were both nominated for the 2008 AND 2009 Lambda Literary Foundation’s Poetry Award. They are both available  through online book retailers.  Black Gay Legend who co-founded GMAD, OTHER COUNTRIES, MINORITY TASKFORCE ON AIDS. and RAINBOW REPERTORY THEATRE. He was the author of the first Pamphlet  used by GMHC to target the POC Community called “LET’S DO THE WILD THANG.” He has been a HIV survivor for the past 14 years.