The Brittle Sea – A Journey in Writing by Tom Kane 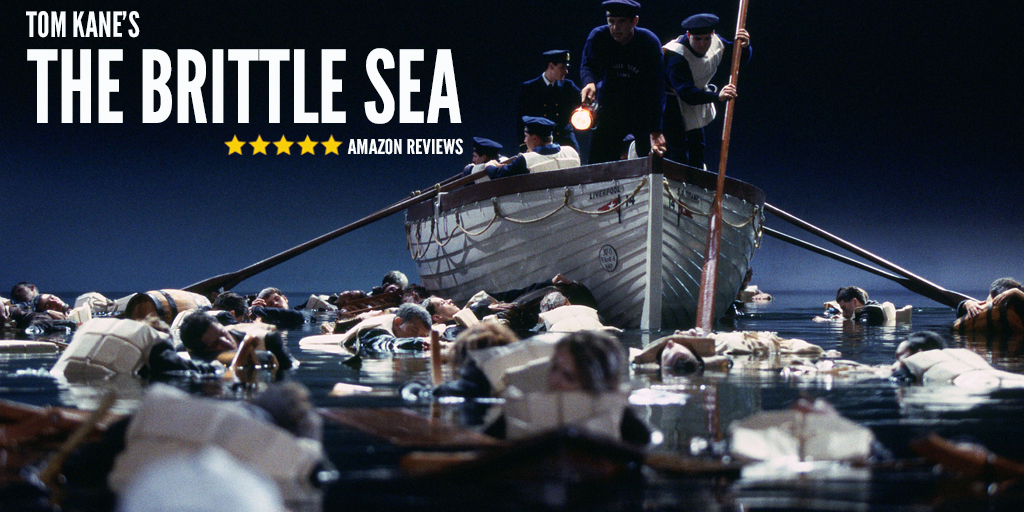 The Brittle Sea is part of a trilogy and is about love, hope, mental health and a determination to overcome adversity.

Book 1 opens with the main female character, young Magda Asparov. Her father has arranged for her to marry wealthy New York businessman Matthew Turner III and she is travelling, alone, from Ukraine to New York. The final leg of her journey is aboard the ill fated Titanic. After the ship hits an iceberg, Magda sustains an injury and falls into a lifeboat, which subsequently breaks away from its divots and falls into the sea. Magda is rescued but has lost her memory. She is given a new name for the interim and a new persona, Maggie, is born. Maggie’s story is intertwined with the fate of others, not least of which the Captain of the rescue ship, Richard Blackmore. Blackmore has taken her under his wing and falls in love with her. Blackmore has one last journey to make for the shipping line, to Africa and so he reluctantly leaves Maggie in New York.

But while Blackmore is away, Maggie is being secretly watched by Turner’s henchman, William Harker, a cold blooded killer and petty thief. The story continues and takes us through an interweaving of history and characters right up to the outbreak of World War I.

Book 2 picks up the story at once and runs with it and the bloody vendetta that breaks out. At the same time this conflict erupts a more devastating world war breaks out and our two warring families are touched by death. Book 2 ends at the beginning of the Spanish Flu Pandemic, Wall Street Crash and the Great Depression, when our warring families discover secrets about each other.

Book 3 picks up where book 2 leaves off. A lesser character from the first two books becomes a prominent agitator in book 3 while other characters appear and disappear as the story unfolds, weaving its way through the lives of the two families during World War II.

The idea for The Brittle Sea came from reading a book about the Carpathia and the Californian, both ships involved in the rescue of survivors at the sinking of the Titanic. So few were saved and I wondered if anyone had been left alive but not rescued. Then I thought what if one last survivor had been found, even when there was no hope, but the young woman found had lost her memory. What would her story be and what sort of life would she have.

The genres of Women’s Fiction and Historical Romance are a new direction for me, but The Brittle Sea is getting good reviews and so I am hoping it will appeal to a broad range of women. Women are by far the most avid readers generally over men and, in my experience, the  most discerning. It should appeal to women of all ages that like a romance but with an historical twist, a little bit of adventure, murder, mystery and perhaps a smidge on of intrigue.

Though The Brittle Sea was never intended as a book about mental health, that’s the way it has developed as I gave the characters their head and let them weave their own tales. In a small way, in my mid to late teens, I suffered with depression and it’s one of those things where outwardly you look fine, but inwards your world can be falling apart. My main female character, Magda, has a major problem throughout as she loses her memory and it emerges she has developed a split personality. So Magda’s story develops, but every now and then, the new character, Maggie, appears and has no idea what is going on. It was fun, but hard work, writing about two personalities so entirely opposite, but in one body. I hope I’ve pulled it off, and so far from reviews it seems I have.

For the next two books I’m developing the mental health theme. Giving nothing away, let’s just say the Magda/Maggie family have more than one loose cannon in their midst. And the antagonist family of William Harker, has it’s murderous psychopaths.

A Little Bit of Author Background

I have enjoyed writing The Brittle Sea so much and that love of writing is enhanced with my love of history. This historical emphasis in my life started at an early age. I was born 65 years ago on the outskirts of a large city, Leicester, in the English East Midlands. Leicestershire is sometimes equated to the heart of England and you only have to look at a map to see why.

Leicestershire is steeped in English history from before Roman times through to Richard III and beyond. It is the most diverse city in England, with many Indian and Pakistani immigrants migrating toward Leicester because of the hosiery and garment trades it’s famous for. I have delved back into my own family history and discovered I’m descended from immigrants. My paternal roots are of French Huguenots who came from France to England in the Middle-Ages.

I am a firm believer that we all have a chequered history and many, if not most of us, have a good story to tell, if only we have the chance to inspire younger generations to tell these stories and develop into the great authors of the future.