Tales of the Phoenix by Kristen Stieffel 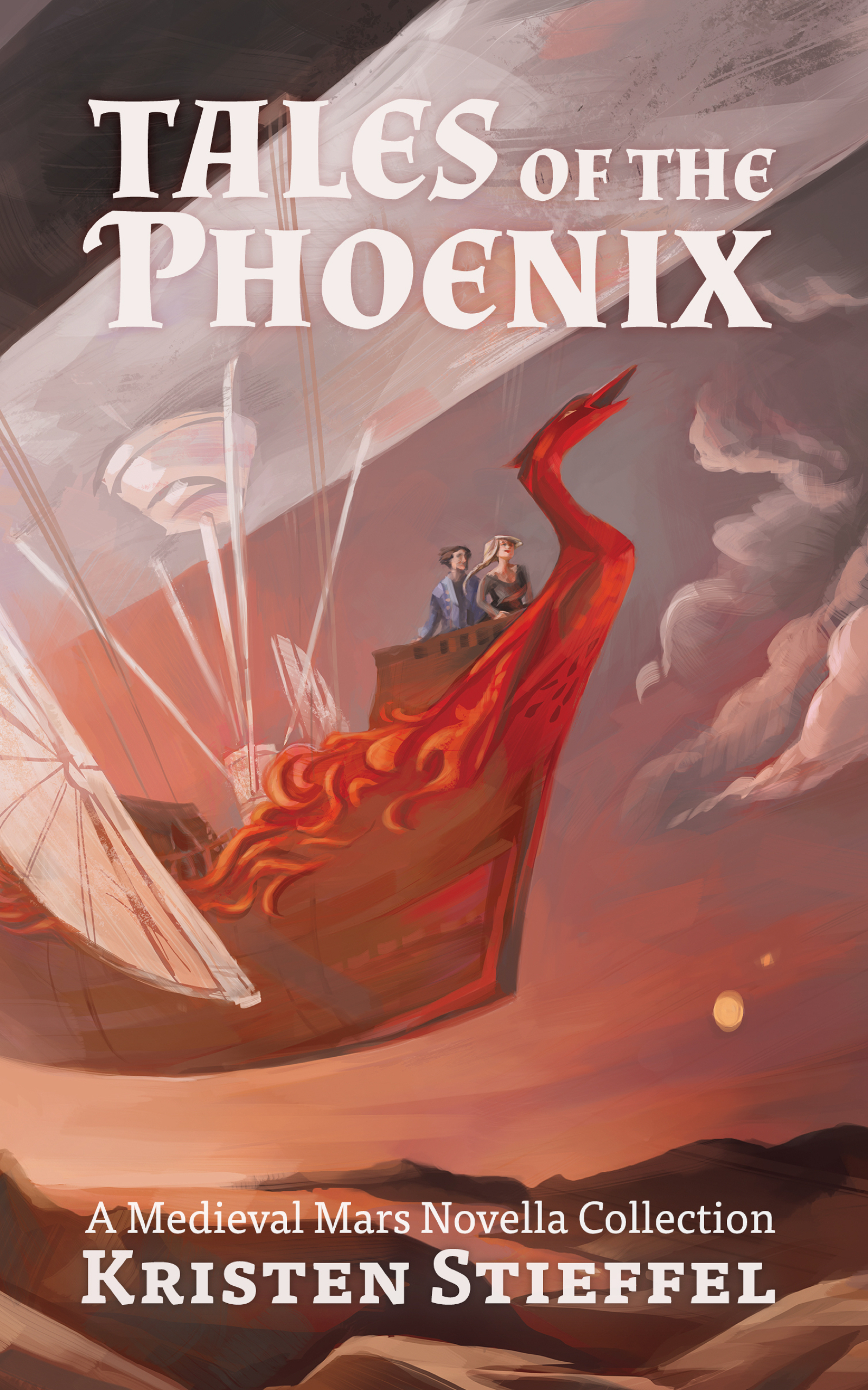 This is my first time in the Authors’ Lounge, so forgive me if I don’t know my way around. Is it okay that I brought my own tea? It’s orange and cinnamon. Thanks for finding me a seat.

My book Tales of the Phoenix is a steampunk novella collection, but honestly I was hesitant to call it that for a long time, even though the Phoenix in question is an airship. I mean, airship equals steampunk, right? Except the Phoenix isn’t steam-driven. It’s a hot air dirigible.

Did I mention it’s a hot air dirigible on Mars?

Tales of the Phoenix is part of the Terraformed Interplanetary Series, the brainchild of editor Travis Perry at Bear Publications. This storyworld exists a thousand years in the future, after the inner planets have been terraformed and colonized. A societal collapse led to a breakdown in communication between the planets. Just as the collapse of the Roman Empire led to the Dark Ages on Earth, this collapse caused the Mars colony’s regression. Travis wrote one novella in this storyworld and then solicited others from a variety of writers and published them in an anthology called Medieval Mars.

My novella “Flight” appeared in the anthology. My main inspiration was when Travis said that because of the extreme highs and lows of Mars’s terrain, if the air was dense enough in the mountains for humans to live there, then in the valleys it would be so dense it could support airships, or flying creatures like dragons and birds large enough to carry human passengers.

He had me at “airships.”

The Valles Marineris on Mars is the deepest, longest valley in the solar system. If it were on Earth it would cross the entire United States. It’s ten kilometers deep, but in the Medieval Mars storyworld, the eastern half of it is ocean. It seemed to me the perfect place to bring together giant birds, dragons, and an airship.

I’m usually a character-first writer. That is to say that first a character comes to me and I discover their story, then I design the storyworld necessary to hold that story. “Flight,” the novella I wrote for Medieval Mars, is the first time I wrote a story setting first.

Into that setting, on the shores of a fictional ocean in the Valles Marineris, I brought Astrid, who had been a “bird jockey” in her youth but in adulthood grew too large to race. She longs to fly again, but instead she is a bird groomer and helps train the new kids who race.

Along comes Ian, captain of the airship Phoenix, bringing the ship’s owner to see the races. Astrid is enchanted not only by Ian but also by the ship.

Part of the storyworld is that some remnants of technology remain from the old days—“The Days of Magic” as some call them. So although the Phoenix was built at a medieval level of technology, it incorporates high-tech elements salvaged from that earlier time.

After Medieval Mars was published, those characters…and that airship…stayed with me, compelling me to continue their story. I wrote two more novellas about them and pitched them to the publisher, but by that time he had moved on to Victorian Venus and would not return to Mars any time soon.

So first I wrote a new novella (also steampunk!) for Victorian Venus. Then I pitched him on publishing my three Mars novellas in one volume, and he agreed.

Tales of the Phoenix is three distinct stories, each set about two years after the prior one. But they can be read like a novel. In addition to the airship, a common thread that runs through them is the romance between Astrid and Ian. I never set out intending to write romance, but I found it sneaked into my stories more often than not. Now I tend to lean into that.

I hope readers will enjoy the mix of romance, science, and adventure that are in these stories. And I hope the publisher will return to Medieval Mars someday, because these characters have at least one more adventure in them.

Kristen Stieffel is a writer and freelance editor specializing in speculative fiction. Kristen’s first book was Alara’s Call, an inspirational fantasy novel about a clergywoman turned prophet. An elder in the Presbyterian Church USA, Kristen has served as clerk of session at her church and teaches adult Bible studies. Despite living in Florida, Kristen is an avid knitter. In the state that pioneered air conditioning, most sweaters are worn indoors. Find her online at KristenStieffel.com or look her up on Twitter.