Sniper! – A Natalie McMasters Mystery by Thomas A. Burns, Jr. 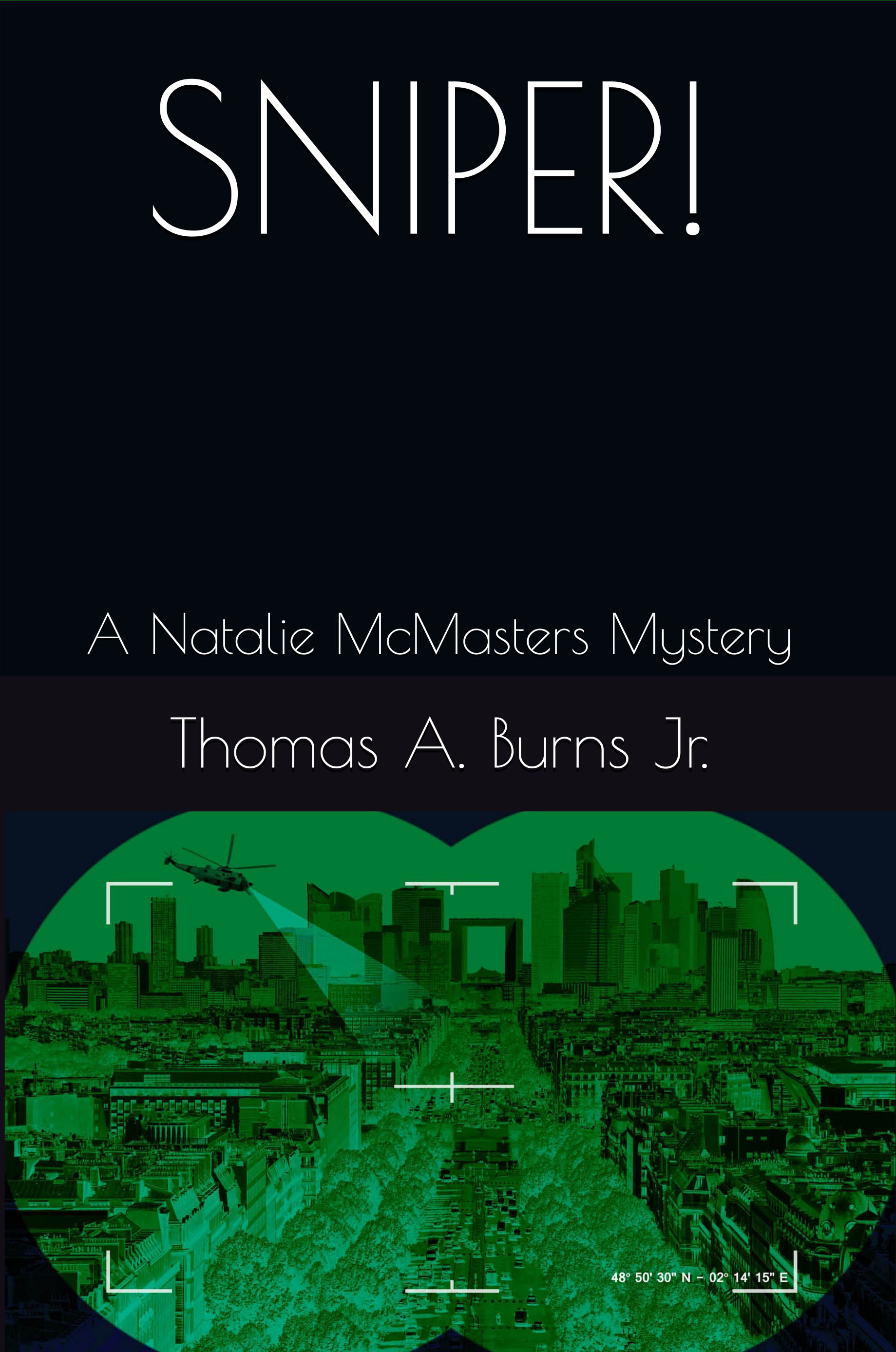 Natalie McMasters is a detective for the new millennium.

If you’re a mystery lover, you’ve read all the classic detective stories. Sherlock Holmes. Sam Spade. Phillip Marlowe. Kinsey Millhone. What do all these sleuths have in common? Each one was a product of their era and their culture. So too is Natalie McMasters.

The Natalie McMasters series is notable for its sexy, intricate plots, breakneck pacing and gritty, dark atmosphere. These are definitely not cozy mysteries! Keep on reading the series and you’ll experience the transformation of an innocent college coed into a hard-boiled PI for the 21st century.

At the beginning of the series, Nattie is a twenty something pre-law student at State University, a mega-college in the capital city of an unnamed southern US state. To help make ends meet, she works for her Uncle Amos Murdoch, the proprietor of the 3M Detective Agency, which is based in a nearby small town because the frugal Amos won’t pay the high rents in the capital. Most of his business comes from catching insurance scofflaws who say they’re hurt but really aren’t. Nattie spends most of her working hours on stakeout, waiting for a subject to do something they’re not supposed to be able to so she can get a picture. It’s a great job for a student — she can study during all those long hours in the car. Amos even got her a private detective trainee’s license from the state, of which she’s prouder than she likes to let on.

The latest Natalie McMasters Mystery, published in November 2020, is Sniper! (the exclamation point is part of the title). It’s a story about three people whose love for each other has given them the courage to adopt an alternative lifestyle, one that will certainly not be understood by most people. Nattie, who is bisexual, is married to Maria de Guadalupe Ibáñez, but has also fallen in love with her best friend, Danny Merkel, her partner at the 3M Detective Agency. Rather than choose between the two people that she loves as society would have her do, she has convinced Lupe and Danny to form a family with her as a throuple, and Lupe’s eight-year old son Eduardo. Even though the law prevents a marriage between more than two people, the three of them held a ceremony officiated by a liberal minister to affirm their commitment to each other. Problems arise for the fam when Nattie is thrust into the public eye because she’s involved in a horrific sniper attack on State campus during a gun buyback event.

Since she’s nearly lost her life on several occasions due to attacks by bad people, Nattie is a strong supporter of the right to keep and bear arms. Interviewed by local media after the shooting, she emerges as the campus voice for the Second Amendment, a position she neither wants nor appreciates. This publicity has many negative ramifications for Nattie and her fam. As the shootings escalate, a societal collapse ensues, with Nattie’s escalating troubles acting as a microcosm for the effects of the shootings on the city-at-large.

Besides being thrilling, sexy mysteries, each of the Natalie McMasters novel addresses some important social issues. In Sniper!, these are gun control, society’s tolerance of alternative lifestyles, and policing in the face of a crisis. It’s important to note that I do not espouse any specific agenda in the books, rather, I use the story as a means to explore different facets of each issue. In this way I hope to stimulate my readers to think about difficult subjects and think about why they believe the things that they do. I understand that this may make some people uncomfortable and limit my readership, but it’s a risk I’m willing to take to make my work relevant and worthwhile.

The Natalie McMasters novels do contain some graphic sex and violence, and are strictly for an adult audience. However, they are not erotica, and the sexual and violent scenes occur only as a natural outgrowth of the plot. Because of their depiction of 21st century relationships, the books also have a strong LGBTQ aspect. While I think that any open-minded fan of thrilling mysteries will enjoy my stories, I’m hoping to attract a new adult audience of younger readers in their twenties and thirties to form the next generation of mystery aficionados.

The sequel to Sniper! is entitled Killers! and is already in preparation. It tells of Nattie’s hunt for the murderer of dear friend. Look for it in the spring of 2021.

I started reading mysteries as a kid with the Hardy Boys, Ken Holt and Rick Brant, and graduating to the classic stories by authors such as A. Conan Doyle, John Dickson Carr, Erle Stanley Gardner and Rex Stout, to name a few. I have written fiction as a hobby all of my life, starting in marble-backed copybooks in grade school. I built a career as a technical writer, science writer and editor for nearly thirty years in industry and government. Now that I’m truly on my own as a freelance science writer and editor, I’m excited to publish my own mystery series as well. You can join the Nattie’s Readers Facebook group, and follow me on Twitter, Instagram, BookBub and Tumblr. You can read the first ever Natalie McMasters short story, Stakeout! and sign up for the monthly 3M newsletter on my web page at https://www.3mdetectiveagency.com/, and follow the 3M blog where I post book reviews and news about Nattie and the 3M gang.

I love to hear from my readers and I’m always interested in your comments about my work, whether positive or negative.

Much thanks to Elizabeth Schultz for requesting that I submit this article to Author’s Lounge.