She Follows the Moon by Tim Arnzen 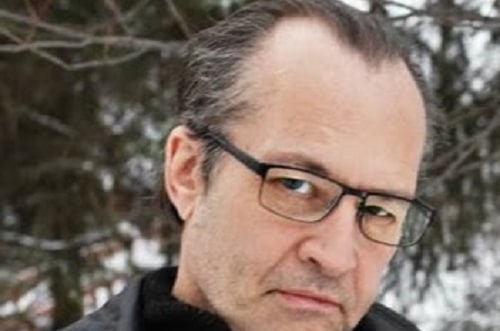 My name is Tim Arnzen, and when I was young, I wanted to be Robert E Howard, Edgar Rice Burroughs, and I set out to do that by telling a story first described in the stars. I guess it started with: ‘Abbott and Costello meet Frankenstein’s Monster’ and a trip to Seattle, where I learned of the underground city beneath the skyscrapers. I also met a homeless boy my age on the pier, fishing for small sharks. And so, after many years of studying werewolf and vampire lore and dreaming up a bit of my own while using a mixture of Greek and Egyptian mythology, I was ready to tell my own story of good versus evil. I think I have done that with She Follows the Moon.

She Follows the Moon is the first installment of a three-part story that begins with a war between a grandson and his grandfather and a battle for mythical Arcadia and as stated written in the stars above. The wolf and the bear’s struggle, the werewolf King Lycaon versus the werebear grandson, Arcas. The first evil in the world manifests itself as a vampire with the help of King Lycaon and his early experiments on himself and his infected blood. This first vampire is the antagonist of She Follows the Moon, and along with King Lycaon, both are pitted against a group of dedicated werewolves tasked to hunt down the undead, specifically this first vampire. In the modern setting, we meet Lil, the young lady whose life will change as she follows the moon in a chase to rid the world of the vampire. Along the way, she will meet many other hunters, who help with her journey as a servant of Heptet, the ancient Egyptian goddess of resurrection.

A story about the experimentation upon lycanthropy and the immortal madman King Lycaon’s quest to control his irresistible urge to eat human flesh. As with many experiments, they go wrong, and a new type of monster is born into our world. This battle takes place in the modern setting and brings in much of the lore surrounding the werewolf and vampire, but bigger things are afoot than the world’s first vampire.

She Follows the Moon is a world of an ancient swordsman from the crusades, old west cowboys, CIA agents, a couple out on a weeklong sailing adventure, a private island, Russian Mafia, North Korean Navy, Russian GRE, ancient Greeks and Egyptians, this story packs the lore of the were-beasts and the blood of the old gods from the primordial Earth. I want to thank Authors’ Lounge for the opportunity to share She Follow the Moon with you!

Part II is available for purchase: Titans of Mars

The title of the trilogy is The Wolves of Anubis.

I started telling stories to myself when I walked to elementary school and wrote my first poem when I was nine. I still remember it. I have been writing stories for most of my life, and at age 53, I have no plans to stop. Six years ago, I was diagnosed with type IV melanoma ( a lifetime commitment to cancer and now a Type I diabetic from the medicine). My daughter is why I post my stories for the world because the next one may be my last.

And again, a special thanks to the Authors’ Lounge for an opportunity to share!

By the way, I gave that homeless boy on the pier in Seattle my dinner, and I think about him, and others like him often as inspiration for stories they will never be able to tell.