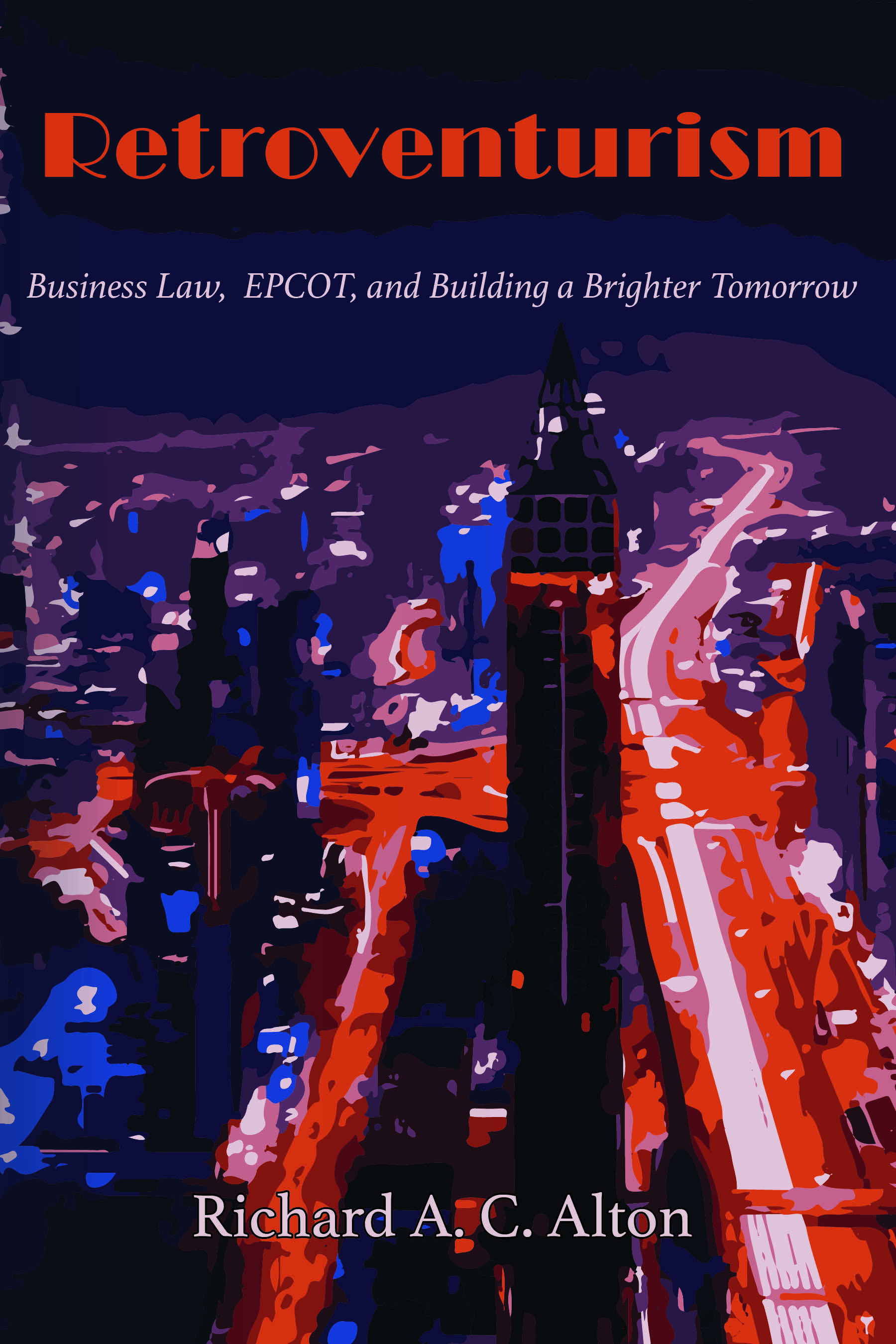 Retroventurism: Business Law, EPCOT, and Building a Brighter Tomorrow is a business law primer formulated into a narrative on the history of Walt Disney’s original 1960’s vision for the Experimental Prototype Community of Tomorrow (“EPCOT”). The work is buoyed by connecting the study of business law to intriguing components such as the Disney’s use of shadow companies to purchase land in Florida, the dream of visionary cities, and ideas of a brighter tomorrow. This mixed-use work seeks to engage readers interested in the basics of business law in a new and intriguing way. The book also acts as a supplement for a business law course (of varying levels) that teachers, professors, and students can utilize to take their class or studies to the next level.

Retroventurism is a highly innovative work of narrative instruction, that was born out of the creation of a business law course syllabus. This work utilizes an audience engaging process called Project Law experimental that encourages the readers to take on the role of researcher, explorer, and eventually creator.  This is achieved by offering the foundations of topical and poignant business law components which serve to encourage the reader to take on the mantel of retroventurism.  For example, chapters such as public relations law and the law of business plans which are of high interest to the average reader, but often ignored by standard business law textbooks, are featured prominently.

Retroventurism examines past unfulfilled business ventures and answers not only “what if?” but asks “what now?”. As term of study, retroventurism captures the idea of learning from the past but focuses on creating a brighter tomorrow. We can learn so much about the trials and tribulations of past business plans, learn from their failures and build upon their successes. This book is a tool in the mission.

The target audience is entrepreneurs, entry level business students, and college level business course administrators and professors. How big is this target audience? When discussing entry level business students, we have a large swath of individuals. Reports show that business degrees are the number one major sought on college campuses. As recent as 2017, of the 1,956,000 bachelor’s degrees conferred, the greatest number of degrees were conferred in the fields of business (381,000). That is almost 150,000 more than the next field behind it. On the associate’s degree level, business fields make up two of the top five awarded associate degrees in America.  This is to say that business students, business courses, and business professors make up an extremely large portion of the American collegiate world and the target audience for Retroventurism.

The core audience though is much bigger. One way of determining the core audience is to learn about the fascinations of those who have written about EPCOT, which plays such a major role in Retroventurism. It is interesting after developing a path of research, learning over the years, constructing a syllabus, and eventually taking time to convert the syllabus into a manuscript, similarities in the individuals drawn to EPCOT as a topic began to emerge. These individuals usually possess a strong pull towards either cooperative scientific futurism or urban land use, if not outright both. That does not even cover Disneyphiles and theme park enthusiasts in general who will be interested in this book.

To understand what is behind the varieties of core readership it is important to unpack cooperative scientific futurism and urban land use. The term cooperative scientific futurism includes interests in futurism, retrofuturism, science fiction, political science, and education.  Those who have an interest futurism are intrigued by EPCOT’s proposed utilization of industry and technology, and its forward-looking mentality. Retrofuturism, which also helped give birth to the name retroventurism, is as it sounds, an exploration of past versions of the future. Readers that favor retrofuturism are drawn into learning about a community of tomorrow dreamt up over sixty years ago. Science fiction fans can easily relate to the themes of space flight and robotics that move in and out of EPCOT. Political science junkies are captivated by the Disney company’s extremely unique, often termed troubling, forms of governance in Florida. Walt’s desire to teach and entertain, i.e. edutainment, is something that undoubtedly intrigues those interested in education itself.  Cooperative scientific futurism thus brings a wide ranging but unique group of core audience members to Retroventurism.

It is not just futurists and sci-fi fans that make up the core audience, those with an interest in urban land use also make up a large portion. Part and parcel of Walt’s EPCOT is urban planning.  In fact, a large portion of one of the pillars of literary EPCOT, The Promise of Progress City by Sam Gennaway, is devoted not mainly to EPCOT, but to understanding the history of urban planning. The Florida land purchase and its use of shadow companies draws in those who are fascinated with real estate economics, as well as property developers who covet learning about the purchasing of raw land and the development of that land for commercial use.

The remaining members of the core audience are individuals who are interested in urban studies and design.  Urban studies, while some may confuse it with urban planning, it is a standalone field.  Urban studies looks at the way people live and how people deal with urban life. How zoning, traffic, crime, and employment effect and interact with the community. Walt Disney directly references the challenges facing cities as an important role in deciding to build EPCOT, as such it makes sense that those interested in urban studies would be pulled in that direction. Urban design is the last piece in the puzzle of urban land use, it is in the art of the building that offers a glimpse of the future. Walt used artists such as Herb Ryman to paint and illustrate what his community of tomorrow would look like. Not only is the future to be bold, but it must be aesthetically pleasing as well.

Thus, Retroventurism while being a book on business law, geared to engaging those interested in business law, is indeed much and more. It is work geared at shaping a brighter future and looks to models of the past to do so.  By engaging in a narrative of the creation of such visionary cities as EPCOT, Motopia, and Opa-locka, the work’s core audience begins to emerge, beyond that which the work targets.

As a dynamic attorney with a broad legal skill set augmented by published writing and public speaking, I felt uniquely qualified to write and promote Retroventurism. I have a decade and a half of legal and teaching experience in the topics covered in this work. I am uniquely experienced, as one of few legal scholars that is not an active full-time professor.  My real-world practical approach to law breaks the myopic and bookish mold that is often found in the authorship of academic legal scholars. I also maintain a strong network as the founder of the Society for Independent Legal Authorship and service as the Past Chair for the Florida Bar International Law Section’s Committee on Public International Law, Human Rights & Global Justice.

As to my publication history, his five law review pieces have been published by journals out of well-known universities such as Michigan State, University of Miami, and Tulane. Additionally, my work has had the honor of being cited as authoritative by the second highest court in America, the United States Circuit Court of Appeals. As far as global impact, my work has been cited to from publications and authors across Europe, the United States, and Canada, even reaching as far as Indonesia. I broadened my legal scholarship by hitting the blog and article circuit developing follow-up pieces to his work.  My articles have appeared in publications like the International Law Quarterly and help generate a further interest in his work as well increasing the core audience.

Regarding my speaking engagements and role as college level professor, I taught college level business law and history courses. I participated in panel discussions hosted by the University of Miami and Barry Law School in Orlando, Florida. I also conducted business law seminars (T.I.P.S. Seminar Series) for social media influencers, as well as lectures on international legal history.

As the founder of the Society of Independent Legal Authorship, I positioned himself to be the go-to source for attorneys wanting to learn more about entering into the realm of authorship.  Through my connections to various legal organizations, such as the Florida Bar International Law Section and local bar associations (his wife Melissa Alton being the past President of the Miami Lakes Bar Association), creates a foundation in which to promote myself, and equally this current work as example of how to achieve publication.

In summation, the knowledge to write this book can be quantified with 10+ years of demonstrated experience representing clients in an array of corporate, business, and immigration matters, and more than 6 years served as an assistant professor of college courses that have included business law & ethics. My legal background has concentrated on managing, leveraging, and exceeding expectations through the constant research of laws, regulations, administrative decisions and other precedents to prepare adequate legal memoranda and business-related agreements and plans.  Further, I maintained a portfolio of authoritatively recognized and cited-to research through strategic writing skills.  All this has allowed me to produce a comprehensive, exciting, well researched, easy to follow, and engaging piece of instructional narrative writing.

Throughout my career, I consistently provided creative solutions to intricate contractual problems which also require a tenacious ability to communicate, analyze, and research both legal and practical business issues. I have a reputation for getting things done with a proactive work ethic and a collaborative approach in seeing a problem from multiple vantage points.  This practical approach to business has paid dividends in my law practice and teaching.  It is also the backbone in my approach to this book. A practical, yet exciting and thought provoking, guide to business law and the history of the Experimental Prototype Community of Tomorrow.

So are you ready for a business adventure? The world of Retroventurism has been waiting just for you!!!