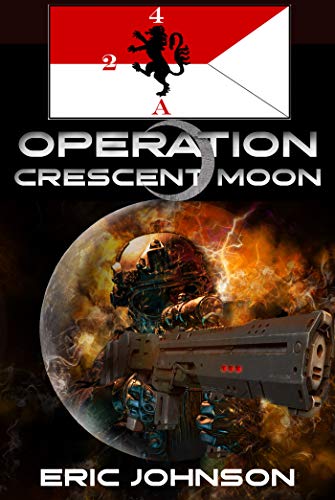 Operation Crescent Moon is a collection of short stories I use to portray my military unit as paid mercenaries in the future. They fight battles on the fictional planet of Friesland, where a war for ten years was fought (and the planet then was known as Mashara). For this Author’s Lounge article the book is written with vignettes broken up with smaller stories that describe the action during the book. The start of the book starts with the unit, 2-4 Cavalry, a small sized unit that has tanks and infantry, describing the cleanup operation. This is due to the Muslim Coalition, a fictional nation, used to control it and gave the planet to the European Space Union, which in itself is a nation as well.

The nations represented in this book is the aforementioned European Space Union, to which 2-4 Cavalry fights for in the future I present. The history is that the European Space Union went to war with the Muslim Coalition for ten years. This war had many casualties and there was blood shed on both sides, to which my characters enter in Book 5: Eagle Hammer. While Eagle Hammer is not what we’re talking about, it sets the stage that my characters learn who their new enemy is and who they fight for now. At this point the characters are fairly comfortable with their new masters and fight the battles that a military unit has to fight. Thus the unit is a national asset that fights where the ESU tells them to fight.

Towards the end of the war the ESU did incur a large war debt and the idea was to “rent” military units out to help pay the debt off. Though it doesn’t pay much, the ESU figures that if it rents out units it can put it in their coffers to help defray the cost of the ten year war. Thus enters the other part of the book, where the unit is sent to Axium, which is an attempt to mimic the Kosovo area and the terrain features that to which the unit fights a lot less than on Friesland and the point of the Axium deployment is that the unit fights some battles, but not a war that they were destined to fight. Their role is mainly peacekeeping and that part of the book features that.

Towards the end the book has a small short story that features some of the backdoor dealing that nations have when dealing with throughout the years. The ten year war had brought out a lot of the worst in people and the instigators had to be caught sometime. This short story goes with that and finishes up the book.

What inspired me to write this book was just the continuation and no real ideas on where to send my characters on their next deployment. I wanted to continue on with the cleanup operation on Friesland and with some more mercenary action (Hot to Axium) as I wanted a Kosovo style operation to take place within my storyline and universe I had created.

My Author’s Lounge target audience for this book is for people interested in military science fiction and military books. I try to emulate a military unit and therefore it would be appropriate for them to read it due to past military service and the feel and difference of military service.

As for what people can get out of it I’m not sure. I think they will get some sense of a good story or collection of stories that reflects the current military and from what people have experienced. I hope that they understand the points and views I have from my military service and now me being out of the military.

Future plans for this book is to sell it of course, and to gain more readers who may like this book. I hope to use this as a springboard for my next book, of which I’ve started to work on somewhat.

As for myself, I am a former military veteran that served in the US Army and US Army National Guard. I served for fifteen years and had some good times and some bad times while serving. I have been out of the military for quite some time and using that experience to enrich my books and to add events that happened to me in my books. I also appreciate Author’s Lounge in allowing me to write this article.