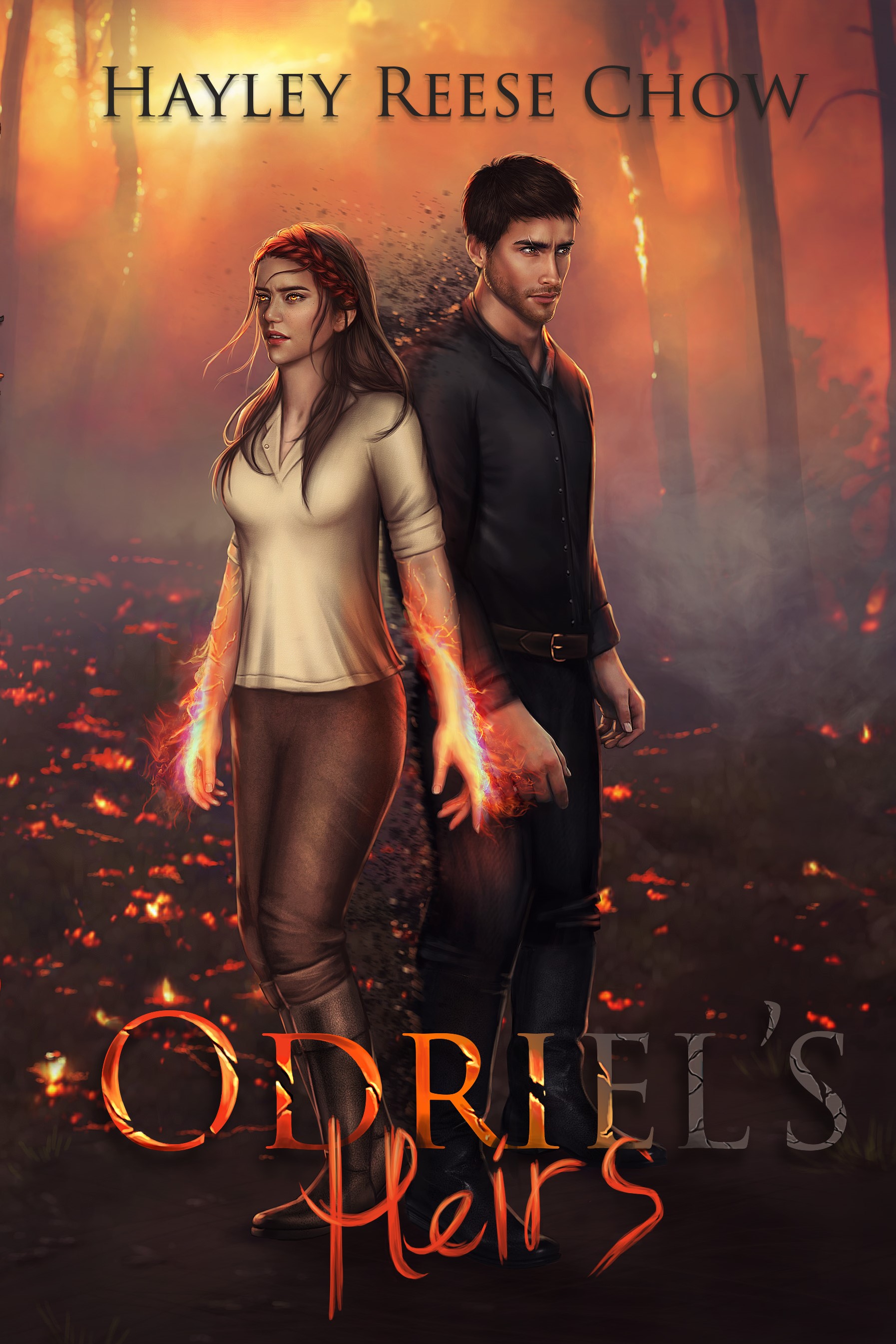 Starring a bullied fire-wielder, a handsome shadow assassin, and a horde of undead, Odriel’s Heirs is a fast-paced young adult epic fantasy with a side of clean slow-burn romance.

As much as I loved to read, I never thought I would write a novel. In college, I had my plate so full of varsity athletics, reserve officer training, and engineering studies (operating in what my professors not-so-lovingly termed ‘crisis control mode’), I barely had time to consider writing. And then, when the opportunity arose to take a creative writing course, I was too shy to seize the opportunity.

But, apparently writing finds a way. After I graduated from college, I had to wait six months before getting my orders to go active duty, and my life strangely… paused. And I didn’t know what to do with myself! I read, and read, and read, and read some more, but somehow I just couldn’t seem to satisfy my craving for stories. Until one day, my father told me to, “create something.” And just like that, a thousand crumpled daydreams shoved in the corner of my brain exploded from my fingertips. It took me three months to write Odriel’s Heirs, and then eight years to gather the courage to publish it—but I am so glad I took the leap.

Odriel’s Heirs is about seventeen-year-old Kaia Dashul, a Dragon Heir blessed with the power of flame to protect her homeland from a godlike necromancer’s undead army. But after centuries of peace, the necromancer has faded to myth, and Kaia is feared by the people she is sworn to protect. Persecuted and cast out, Kaia struggles to embrace and control her seemingly useless gift while confined to her family’s farm. But when the necromancer’s undead terrorize the land once again, Kaia runs away to join the battle.

On the surface, Odriel’s Heirs is an action-packed fantasy journey filled with magic, fantastical creatures, and of course, the undead. Kaia steps out from her sheltered home into a world both wondrous and vicious, embarking on an adventure that’s much harder than she expects. But although this a YA Epic Fantasy, many of Kaia’s feelings—her naivety as she goes out on her own, the expectations she faces as the Dragon Heir, and the fear of letting down her friends—were inspired by my experiences as a young adult and scholarship college athlete. Even in a fantasy adventure, I wanted a story that didn’t gloss over the sweat and the struggle and the pressure of Kaia’s battles or the tolls that they exact on her, emotionally and physically, even as she learns and grows from them. In the end, I hope that readers take away some of the themes of self-acceptance and perseverance to help carry them through their own journeys.

I wrote Odriel’s Heirs primarily for young adult fantasy fans looking for a fast-paced story with a dose of clean slow-burn romance. Although the language is extremely mild and the romance is limited to kissing, there are some instances of body horror (zombies are gross, people), death, suicide, and violence. If it were a movie, I’d call it PG-13, so I usually recommend it for the 13+ crowd. But, while teens are my absolute favorite readers, most of the Odriel’s Heirs readership are adults who enjoy a fun YA Fantasy.

My goal as a writer is to share my book with people that might enjoy them, and to grow and learn as a storyteller as I continue to weave more tales. Odriel’s Heirs, told from the perspective of a Dragon Heir, is a stand-alone novel but also the first of the planned trilogy. Idriel’s Children, a stand-alone sequel told from a Shadow Heir’s perspective, comes out this July. And the third book, Time’s Orphan, is tentatively planned for 2022. There is also a novella, Burning Shadows, featuring the leads from Odriel’s Heirs, that will be released in May for free on my website.

Writing is a big part of who I am, but it’s definitely not the only part. I’m a full-time engineer, Air Force reservist, runner, reader, and mom of two preschoolers. I’m constantly striving (and failing) to find balance, and staying up way too late trying to finish off that last chapter. I currently dodge hurricanes in Florida with my two wild boys, my long-suffering husband, and my miniature ragehound.

Thanks so much for reading! The Odriel’s Heirs e-book is $0.99 on Amazon or free on KU, and if you’re interested in sneak peeks, character art, self-publishing lessons learned, or my other books, you can find my website here. Or if you’d just like to connect, I’m easiest to find lollygagging on Twitter. Finally, so many thanks so much to Readers’ Magnet for the opportunity to take part in Authors’ Lounge!