Nowhere Near Goodbye by Barbara Conrey 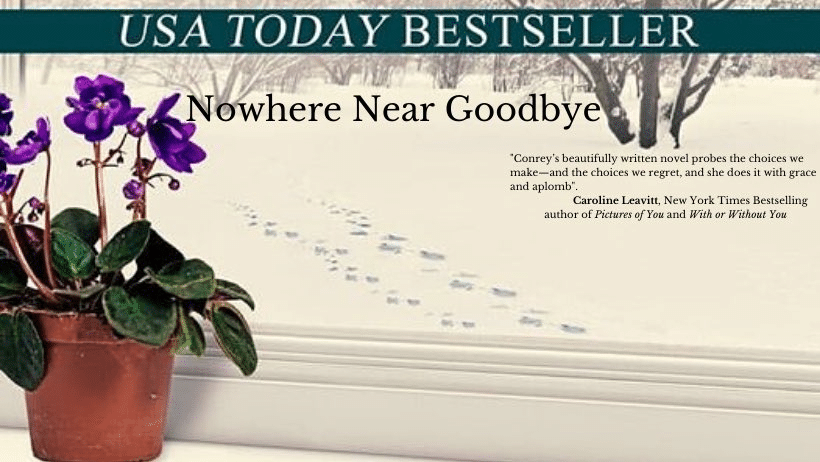 Six years ago I decided to write a book. I’d recently retired and felt the time was right. Plus, I wasn’t getting any younger.

I knew my topic: Glioblastoma. The rare brain tumor that prefers middle-aged men yet somehow landed in the brain of a child and wasn’t satisfied until the child was dead and the family nearly destroyed. Yes, I thought of the tumor as almost human, capable of choosing.

The child was my friend’s granddaughter. I was passionate about the story—it ate away at my heart for maybe twenty years; it was time to set it free. I thought it would be easy. Sit down and write. Isn’t that what they say? Put your butt in the chair and just do it.

Like most advice, this was only partially correct. The problem was, I had no idea how to write a book. No knowledge of pacing, tension, hooks. But that didn’t stop me, and after a year, I handed off what I thought to be a great story to a couple of beta readers, who eventually suggested I find another hobby. Instead, I learned how to write.

Nowhere Near Goodbye started out to be the story of my fictional child, Kate Bennett, who died of glioblastoma. Instead, the book became the story of the woman who devoted herself to medicine and research and created a surgical procedure that annihilated this disease.

Emma Blake, my protagonist, was Kate’s best friend when they were children. Emma watched Kate turn from a fearless child to one who grappled with her fear of death. In a moment of childish drama, Emma swore she wished it was her with the brain tumor, but then when she saw how Kate suffered, she was secretly glad it wasn’t her.

Emma’s guilt over those feelings led her to promise Kate she would find a cure for this disease that so easily plucked Kate from this earth at the age of eleven.

In keeping this promise twenty-five years later, Emma lost everything she cared about. Her husband, Tim, fed up with Emma’s broken promises, divorced her, wanting nothing more than to raise their daughter in a home filled with love instead of broken promises.

Ultimately, Nowhere Near Goodbye is the story of family, failure, and forgiveness.

My naiveté in thinking I could just sit down and write continued when it was time to find a publisher. Who would want my little book? The only thing I was sure of was that at my age, I was now at the far end of sixty, I didn’t have the time for an agent to fall in love with me and for that agent to find a publisher that would fall in love with my book.

Fortunately, I belong to a wonderful organization of writers, Women’s Fiction Writers Association, where I discovered a small press, Red Adept Publishing. I submitted my story to them. I didn’t look for an agent; I didn’t look for other small publishers. I told myself that if Red Adept didn’t put me under contract, I would simply put my manuscript in the drawer.

The happy ending to this story is that Red Adept did put me under contract, and I never had to test that ‘giving up after one rejection nonsense.’

Readers who relate to Nowhere Near Goodbye come in many shapes and sizes. Some are in the medical profession and recognize the need to give up so much in their personal lives when they devote themselves to medicine. Some have lost loved ones to either this tumor or one of a million other diseases. Some are women who have been forced to choose, and one way or the other, by choosing, they lose a valuable part of themselves.

So, what’s next? Another book! I’m working on final revisions of My Secret to Keep. It’s the prequel to Nowhere Near Goodbye and tells the story of a secondary character that I fell in love with, Miss Maggie.

Thank you to Author’s Lounge for allowing me to share my story.

You can find my book here:

You can find me here: www.barbaraconreyauthor.com