Ned and the Chocolate Cheats by Mark Jarvis 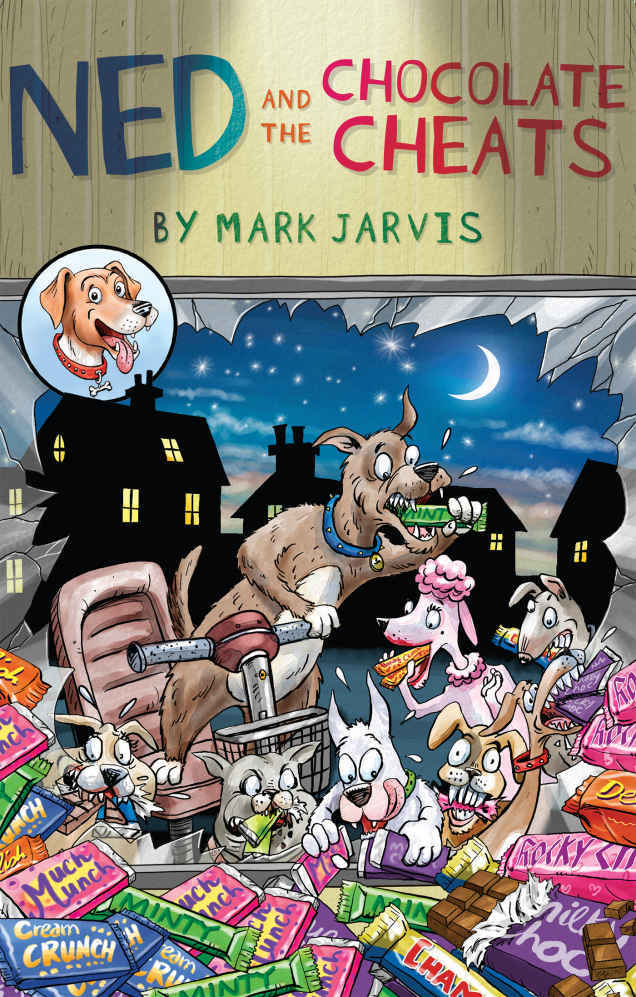 Having been a primary school teacher for a number of years, I have read aloud a great many children’s books. I’ve felt that I’ve got a real sense of the sort of stories that children most enjoy, and I’ve been told many times by children and their parents, adults that I have worked with and by past pupils that are now grown up, that what they most remember and enjoyed about being in my class was the stories; both sharing them together and creating new ones.

I thought it was high-time then, that I had a go at writing my own tale.

Ned and the Chocolate Cheats is primarily about my pet Jack Russell, Ned.

But of course as all children know, their pets can talk. What would a world be like if our animals that lived along side us could converse with us? What would they be interested in and what would they get up to? Would some of them turn out to be not as cute as we thought, and instead become criminal master-minds?

As with all good adventures, Ned and the Chocolate Cheats starts at home, on ‘safe-turf’. However, Ned and his friends, following a mysterious smash-and-grab chocolate robbery at their local sweet shop that was carried out by a gang of stray dogs, accidentally become embroiled with an international criminal gang.

Ned and his ‘person’ called Jeff, together with next door’s female, technologically gifted cat Gizzmo, soon find themselves working for MI5. The heroic friends embark on a chase around the world in an adventure of a lifetime!

I have just finished Ned’s next adventure in the series, Ned and the Sausage Smugglers. But writing now for Authors’ Lounge, has given me an opportunity to look back and think about how far this germ of initial idea has come. I remember when my front cover illustrator, Dave Hill, asked me to see if the children in my class could come up with names for the variety of chocolate bars featured in the first chocolate robbery. I little thought that my story would be enjoyed by adults and children in many different countries. I know from some heart-warming reviews that I have had, that Ned and the Chocolate Cheats has been read aloud, shared and discussed in classes in Northern Ireland, Scotland, North Wales, Liverpool, London, Devon, Cornwall and beyond.

I thoroughly enjoyed a well attended book signing that was organised in Waterstones, and an enjoyable talk that I gave to children of the Plymouth Children’s Book Group. It became very thought provoking, as the children asked me super questions about the characters and their motivations. At both events I was accompanied by my dog Ned, who revelled in all the attention that he received.

The books touches on many topics that can be the starting points for children’s thoughts and discussions. From simple ideas about why you should not feed chocolate to your pets, to greater ideas about organised crime and important environmental issues. As well as a story being simply an enjoyable and escapist immersion into another world, sharing and discussing a story together is an important aspect in the development of reading skills and critical thinking for children.

Writing has opened up a whole new previously unexplored world to me. I have had the chance to promote my book on local radio, and to engage in an interview about Ned and the Chocolate Cheats on Talk Radio Europe’s Book Talk programme. It has made me go on to consider previously unthought about aspects of writing such as marketing and promotion. Areas that must be engaged with if you want to be able to allow your work to be read by others.

I often write about Ned and the Chocolate Cheats on Twitter, at @MarkFashcove and Ned also has his own blog on Instagram at @nedandthe. I also have a website, called mjarvisnow.com that has links to where my book can be purchased. You can also get it at other bookshops, on:

I hope to get Ned and the Sausage Smugglers published soon. This is a continuation of Ned’s adventures, and I have begun work on the final book in the trilogy (well perhaps not final), Ned and the Noodle Nibblers.

I have not secured a publisher for it yet and I’m in the process of querying potential publishers and literary agents. So don’t hesitate to get in touch.

Wish me and Ned luck!