Messenger of the Reaper | Jimmy Straley 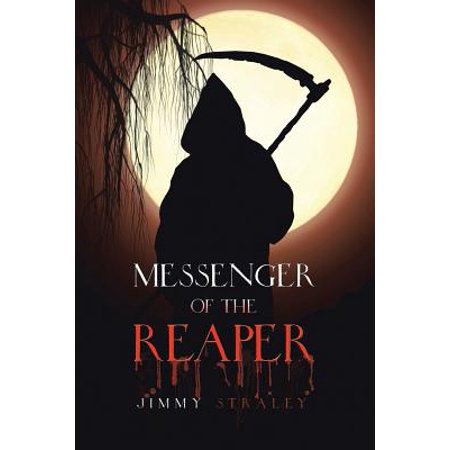 My name is Jimmy Straley and I was born in Sherman TX, in 1960, I grew up in Ft. Worth TX. with, an-abusive mother and no father. I had to begin working at seven years old to support my family, being as how my brothers were mentally challenged and couldn’t work. I met my first wife when I was twenty-one years old and we had two children together, that are grown with their own families now. My marriage lasted twenty-two years, but in the end was not a happy ending. I met the woman that is now my wife five years ago now and so far, though times get tough, I am a happy man. I have four step children, two of them of whom I have not yet met, and two step sons that I have helped to raise these few years.

Readers Magnet asked me when it was that I actually considered writing a book. That would be in 1999. I toyed with the idea, but my first wife was unsupportive, telling me how dumb the idea was, and that I was stupid, so I gave up for a while.

In 2002 I decided to try again, so late at night while my ex-wife slept, I would give an hour or two on a book that I would never get to finish, because in 2005, my computer system crashed, and I lost everything, including hope. I quit for several years after that.

I tried again in 2008. That’s when I began working on Messenger of the Reaper. Unfortunately at this time, I was going through a divorce with my first wife, so I didn’t have much time to put into my book, and again, when she saw it, she put me down to such an extreme that I just gave up and quit writing for several years. I met the woman that is now my wife in 2013, and her energetic and positive personality inspired me to try again, but she didn’t know it until she discovered my rough draft of the book while was at work one day in 2014. She was really excited and began to insist and encourage me to continue writing and to finish the book. Much to my surprise and joy, she is a great editor and she sat down at the computer right beside me and began to edit as I wrote. She helped with ideas and wording, and we finished and got the book published in 2016. We could have gotten the finished sooner, but I was working full time, and we only had nights to work on it.

Readers Magnet also mentioned that they would like to know what kind of recognition we have received since publishing the Messenger of the Reaper. Well, Barnes and Noble put it on their bookshelves immediately, and also allowed us to do a book signing at their main TCU store here in Ft Worth. We were also given a direct link to Amazon so we could sell directly through them, and a link through Author House as well. I also received an award from Writers Guilds of America West on 11-03-16. I was then invited to Pitchfest in Hollywood California. That was a gathering of approximately 50 writers who were invited in front of several movie producers to pitch their books, but only five would be chosen for the awesome chance at having their books produced into a movie. We did not make the cut, but that could change.

The Messenger of the Reaper is mainly about a hit man who is at retirement age, and has had the reaper following and retrieving his victims’ souls his whole career. But the catch is, he could see and sense his presence at every kill. His goal is to train someone to take his place so he can retire, but things didn’t exactly go as expected, because he discovered that his boss had no intentions of letting him go alive, or allowing anyone else to train to take his place. The trainee he selected showed a much higher potential than he expected, and the trainee and the hit man form a bond that could not be broken even in death. The two of them embark on a dangerous adventure that would lead them across the map, on an edge of your seat thriller, taking them to real places you can actually find on the map, and involving them in some of histories real government cover-ups.

My sequel Messenger of the Reaper part-2, which Readers Magnet has made an offer to examine for publishing, is how the journey ends. The trainee has become the hit man and much to his distress his main priority is safeguarding his family from the assassins at he also inherited from his former boss. Another thrilling adventure we can’t wait to share with you