Memoirs of a Surgeon in World War II: From Humble Beginnings to War Hero By Kay Das 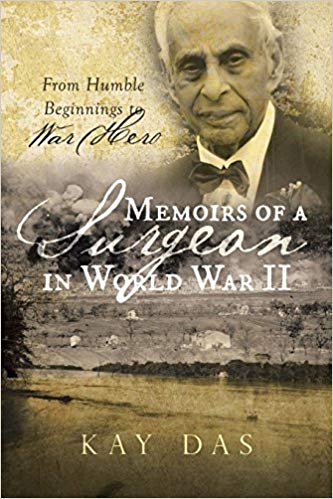 Kay Das enjoyed a long career in the electronics industry spanning three continents before retirement in 2013.  He then engaged in new pursuits including writing, performing music, radio broadcasting, the connected vehicle revolution, and astronomy and cosmology. Kay and his wife Adriana, who is from Italy, have three adult children and six grandchildren. He is also an internationally known steel guitarist with many commercial recordings and is now based in Orange County/ Los Angeles where he performs regularly at musical events.

A lone surviving son, Kay started his writing based on anecdotes his father had banged out on an old typewriter, before he passed away in 2009, describing his experiences in World War II in Italy as a healer. At the end of the war these continued to the description of atrocities witnessed on his return to the country of his birth during the partitioning of British India. Humanity had not learnt any lessons from WW II.

An insightful author and writer, his book details the meandering journey of a man’s circumstances during his pursuit for aspirations, his love for literature, the unexpected toils of being drafted to war, and the return to a forsaken homeland.

Kay Das’s new book “Memoirs of a Surgeon in World War II: From Humble Beginnings to War Hero” is a biography that tells of the riveting moments of joy and sorrows a man, his father, experienced. It is a riveting and yet reflective account that delves into the search for compassion and freedom despite the struggles brought about by war. All this from a humble beginning amongst the bamboo shoots of tropical India.

This collection of firsthand anecdotes is probably no different in spirit than others from a war front, World War II and other wars. There are definitely other published recollections of the same war fronts from different perspectives and nationalities. This work is, however, not just a recollection of military history and facts. These memoirs describe growing up, training to become a doctor, a love of poetry and music, falling in love, unexpectedly being sent to war, and then returning to witness unabated cruelty in his native land. These are recounted from the perspectives of a healer, a surgeon. Such experiences need to be brought to the attention of the reading world to emphasize the futility of war. Many decades later humans continue to develop and build arms to annihilate fellow humans for reasons of ideology, religion, or definition of national boundaries. The pain, suffering, and the ultimate sacrifice made by the souls that perished would be forgotten and would be futile were it not for publications of this genre. We cannot forget.

Here is an excerpt pertaining to his time in Italy: “One morning a little local girl around the age of nine was brought  to me by her father.  She had a splinter wound in her tummy and was in shock. We had a field surgical team and equipment in our building and with  great relief and hope I tried to hand over the girl who needed an urgent operation in her abdomen but to my utter dismay the surgical  team  refused  to oblige as they were under orders to move North imminently to support troops who were advancing to gain the military advantage gained by the deception. I had never felt so sad and helpless in all my time in the war zone. I can still recall the look in her eyes.”

It is estimated that over sixty million men and women, military and civilian, western and eastern fronts, died in the War. Indian military casualties are estimated at eighty-eight thousand. The US and Great Britain each lost around four hundred thousand souls.

World War II ended in 1945, but this story continues with his return to the Indian subcontinent, where he experienced the painful and bloody partition of India and Pakistan as the British departed after centuries of colonial rule. He continued to witness atrocities as humanity had seemingly not learnt from the war. He describes seeing more pain and suffering, now a full-fledged surgeon in his homeland. He and his young family escaped at the last minute to the Indian side of the border in 1947 by the skin of their teeth.