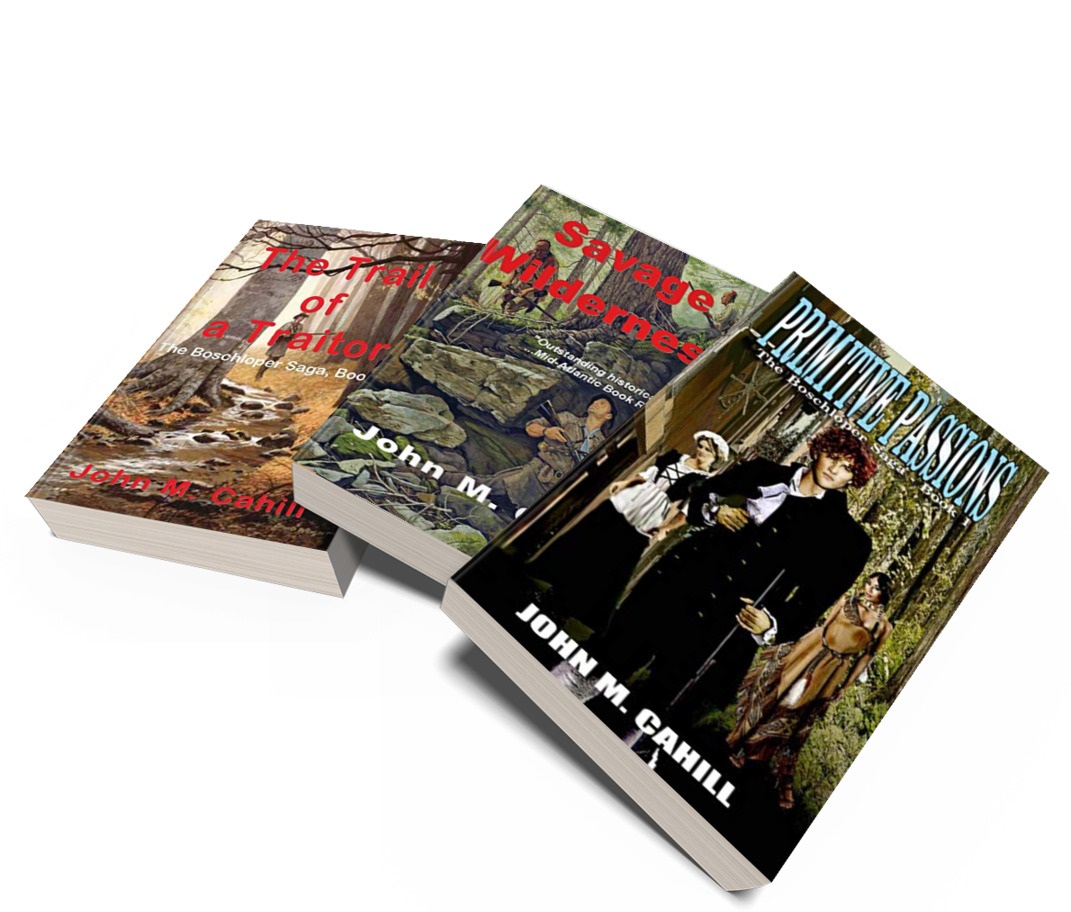 It is my pleasure to join you, here, on Authors’ Lounge, to tell you a little about myself and my books.

My name is John M. Cahill and I am a writer of historical fiction. Specifically, I am the author of The Boschloper Saga. This saga is set in late 17th-century New York and, through the eyes of a young, Irish fur trader, Sean O’Cathail, explores the relationships and interactions of the Dutch and English fur traders, their Iroquois neighbors and their French adversaries. “Boschloper” is Dutch for “runner in the woods” and refers to fur traders in general.

Book 1 of the saga, Primitive Passions, was published in 2015 and tells the story of the arrival of the teenaged Sean O’Cathail in America, his introduction to fur trading and his adventures as both a fur trader and an emissary of the English colonial governor to the Iroquois.

Book 2, Savage Wilderness, came out in 2015, and follows Sean and his fellow boschlopers who, in 1687, enter French territory in an effort to divert the Canadian fur trade from Montreal to Albany. With danger lurking and death threatening, they soon find that they will need all their wits to survive their trials and safely return home.

In Book 3, The Trail of a Traitor, which was published in 2019, Sean learns that his long-time nemesis, Jeremy Cox, has turned traitor and is leading French raids on English settlements. Sean vows to bring Cox to justice but, when Cox kidnaps Sean’s friend, Megan O’Reilly, it becomes personal.

All three books are available in paperback or eBook formats on Amazon or from Barnes & Noble.

Through The Boschloper Saga, I celebrate the men and women who first opened the way to America’s interior.  A life-long colonial history buff, I was born and raised in western Massachusetts and spent most of my life in New York’s Mohawk Valley. It was while I was living in the Mohawk Valley and surrounded by reminders of the area’s Dutch history that I found that I was especially intrigued by the events of the second half of the 1600s. At that time, although the English had taken New York from the Dutch, the Dutch in the colony behaved as though nothing had changed even going so far as to refuse to speak English. This is a virtually unknown piece of American history that I believe should not be forgotten.

I was also impressed by the bravery of the people who came to America in the 17th Century and settled on the frontier where most of the action in my stories occurs. These stalwart adventurers inspired and continue to inform my work.

My primary audience for The Boschloper Saga includes fans of historical fiction who are interested in learning about life, love and adventure in colonial America. I hope that they will come to appreciate the lives of the people who first opened up the American interior and to realize that many of the political and cultural problems of the time are much the same as those we face today. My basic message is that people are people and race has no bearing on whether they are good or evil, brave or cowardly.

I am currently working on the fourth installment of The Boschloper Saga. This volume, entitled Beyond the Frontier, will follow Sean O’Cathail and his family and comrades into the early 18th Century and the events that comprise what is now known as Queen Anne’s War. Future projects may include the role of the Irish in World War One and/or Viking adventures in medieval Ireland. I just need to see where my curiosity will take me.

I began writing historical fiction after a long and successful career in social marketing and public relations with New York State. I can’t think of a better way to spend my retirement. A member of the Historical Novel Society, Historical Writers of America, the Society of Authors and the Alliance of Independent Authors, I now live, with my wife, in Vienna, Austria.

Visitors to Authors’ Lounge can learn more about me and my work by visiting my homepage at http://www.john-m-cahill.com . I can also be found on Facebook at http://www.facebook.com/jmcahill47 and Twitter at @boschloper .