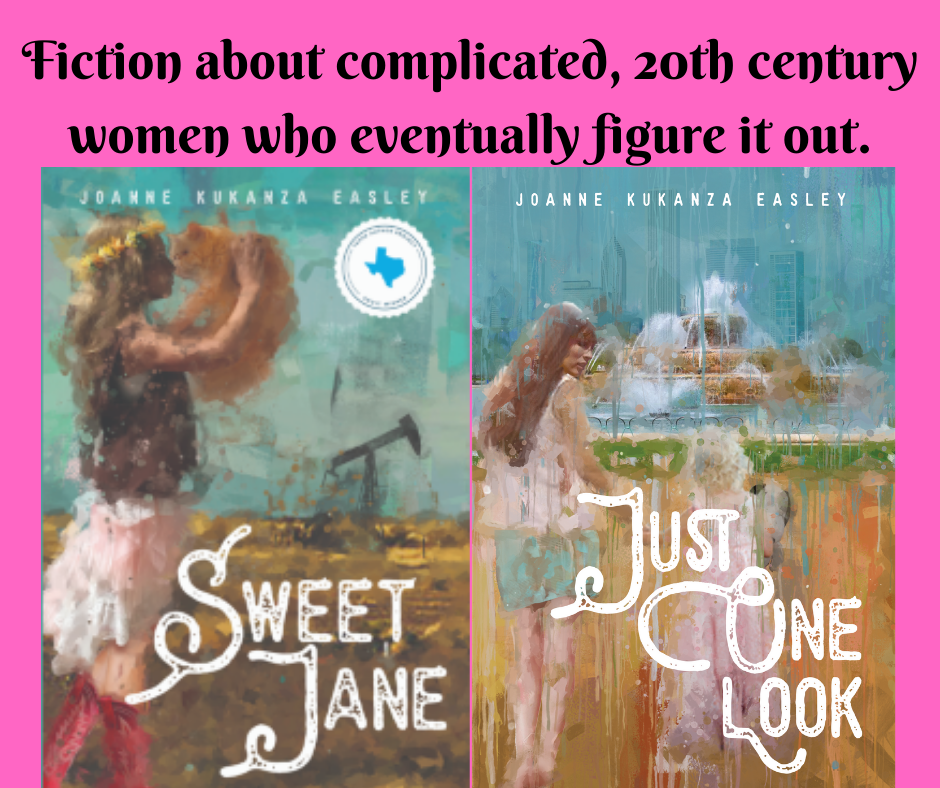 I’m so pleased to share a little bit about myself in the Author’s Lounge. I write fiction about complicated, 20th century women who eventually figure it out. My debut novel, Sweet Jane, has won several awards, including being named the winner in adult fiction at the Texas Author Project. My new novel, Just One Look, will be released on June 24, 2021. Currently, I am working on my third book, I’ll Be Seeing You, which features characters from Sweet Jane.

Although I’ve been writing for many years, I only pursued my dream of publication after retiring from a career in nursing, with experience in the cold, clinical operating room and the intense, emotionally fraught world of psychiatric nursing. I live and write on a small ranch in the Texas Hill Country. My muses are three little rescue dogs who follow me to the office when I say, “Let’s go to work.”

My fiction is character driven. I imagine a character, describe her appearance and idiosyncrasies, and create her backstory. It takes time to flesh her out. Then I put her in situations and see how she reacts. I don’t outline a book at the outset, organization comes later in the process for me.

Belonging to a critique group has proved invaluable. It’s important to get your words before others, listen to their take, and use it to improve your pages. But always stay true to your vision.

Sweet Jane is a multi-award-winning narrative you won’t be able to put down. I’ll have you turning pages faster than you can keep up. With its vivid descriptions, heart-tugging true-to-life situations, and strong characters, my novel pulls you into Jane’s world and doesn’t let go.

Jane Jennings has a broken childhood—at age six she knows vodka makes Mama mean and she doesn’t want to be like her when she grows up. By the time she is eleven, she spends as much time as possible outdoors with her only friend, Ricky. Together they roam their prairie kingdom they call Rangerland—until a tragic accident ends their friendship and her refuge.

After an ugly confrontation with her mother, Jane runs away from home at sixteen, during the Summer of Love—1967 (those were different times.) For the next seventeen years, she builds a life that doesn’t include self-reflection. She looks good on paper: married, grad school, a coin-carrying member of AA; but her carefully constructed life is crumbling. Not only has Jane never faced her past, but she’s hidden it from her husband. When a family death draws her back to her childhood home, she is catapulted back to the events that made her the woman she is. This is a story of life, love, hope and redemption, bittersweet twists and turns, that leads Jane to her truth.

Just One Look is set in my hometown of Chicago. It’s set in the neighborhood where I grew up, but I assure my childhood friends: this is a work of fiction.

In 1965 Chicago, thirteen-year-old Dani Marek says she’s in love, and you best believe it. This is no crush, and for six blissful years she fills her hope chest with linens, dinnerware, and dreams of an idyllic future with John. When he is killed in action in Viet Nam, Dani’s world shatters. She launches a one-woman vendetta against the men she seeks out in Rush Street’s singles bars. Her goal: break as many hearts as she can. Dani’s ill-conceived vengeance leads her to a loveless marriage that ends in tragedy. At twenty-four, she’s left a widow with a baby, a small fortune, and a ghost—make that two.

Set in the turbulent Sixties and Seventies, Just One Look explores one woman’s rocky journey through grief, denial, and letting go.

I write in the hope my readers will find a piece of themselves in my novels and increase their understanding of the human condition.

I also have a writer’s page on Facebook: https://www.facebook.com/J.Easleywrites/