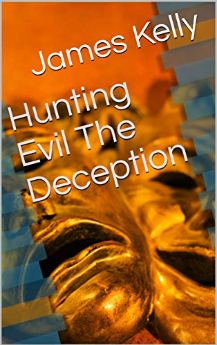 My name is James Kelly and I am the author of the widely popular Hunting Evil series.

Johnny is following his client’s husband when he discovers the dead mutilated body of a young girl. He later learns that the body has a personal connection to him. There is also a note found on the girl’s body from a killer that Johnny thought he killed two years prior when he was still a homicide cop. The killer claims to be the infamous Night Stalker. The night Stalker mutilated and killed over a dozen young girls before Johnny killed him or thought that he killed him. Has the Night Stalker returned? Did Johnny kill the wrong man? These are some of the questions Johnny has to answer in his search for this serial killer. While Johnny is searching for this diabolical psychopath someone is hunting for Johnny. Will Johnny live long enough to catch this twisted psychopath?

I wrote Hunting Evil the deception because I wanted to write a story that people who enjoy crime-thrillers could relate to and enjoy reading. I wanted my characters to come alive on the pages. I created a fictitious town in Nevada for the story to take place in. I also wanted to use the story to address important issues such as racism, discrimination toward women, homophobia, etc. I think that these are important issues that need to be addressed. I don’t know of any other crime thrillers published that have a black, gay man as the main character. I think that it is time that the writing world quit stereotyping gay people in novels. Most novels that have a gay person as a main character depict the person as being feminine and weak. There is no such thing as a typical gay person. Not all gay people are feminine or weak. I wanted to create a character that black, gay people can relate to. I wanted the reader to experience life through the eyes of a gay black man. I did not want to make the story about racism or homophobia or anything like that but I did want to blend those themes into the story. I also wanted the reader to experience some of the ways that gay people are discriminated against. I also created the dead zone as a symbolic symbol of a typical poor black neighborhood.

I self-published this book because I could not find a traditional publishing house or agent that wanted to publish a crime-thriller that has a black gay main character. I was told by several agents and publishing house that most people did not want a black gay main character in a crime- thriller. I was told that if I hid the fact that Johnny was gay or made him a heterosexual then they would publish the book. I refused to chain the sexual orientation of Johnny just so I could get this book published. Sales of this book have been okay considering the fact that it is self-published. I have received some hate e-mails from a small amount of people who say that I am promoting homosexuality. I really do feel sorry for those people. I realize that they are ignorant and will never accept a gay, black man as a main character in this genre. I also have received quite a few positive e-mails from readers who really enjoyed reading the book and were supportive of a main character that is black and gay. I hope to do a second book in this series. This is my first Fiction and I really hope that the reader enjoys the story. I am an advocate for gay rights and racial equality.

Thank you for reading this book.

Please say no to racism and discrimination.