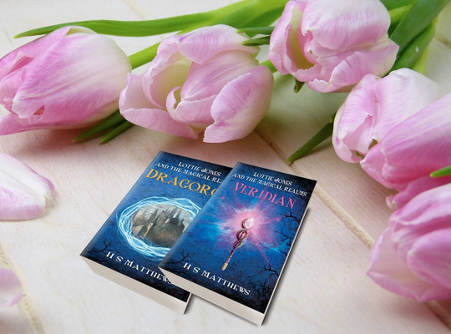 I was asked to write an article about myself and my books by Authors Lounge, it’s difficult to write about me and much easier to immerse myself in the world of Lottie Jones, so where do I start?

I am an author, but I started my journey quite late. I loved to write as a child, but one encounter with my English teacher dashed my hopes and dreams when she told me “You have no imagination” I didn’t write another story after that.

Move on a few years, I got married, had children and life took over, but once the children left home, I started to write poems. I showed them to my husband, children and a couple of close friends, they loved them and so I told them that I wanted to write a novel, they told me to go for it and so Lottie Jones began, and to that English teacher I would say “I have a great imagination and you were wrong!”

Lottie Jones and the Magical Realms is a series of books I am writing following her from an ordinary young lady to the most powerful sorceress in the Magical Realms. Lottie has a destiny that is plagued with danger and adventure, she will become the High Sorceress and Protector of the Magical Realms. As you can imagine there are mythical creatures, wonderful characters and challenges along the way.

My inspiration to write Lottie came as a cathartic exercise I suppose, as a teenager I was the target of bullies and suffered greatly with confidence, Lottie is the young lady I wish I had been, she is brave and strong, everything that I did not feel I was back then. I hope that my readers see that it is okay to be themselves, that it is okay to be sad, to be afraid and that there is a way through the tough times. Most of all I hope that everyone who reads the books manages to escape to a magical world, to become one of my characters for the time that they are reading  the books.

I write Lottie Jones for the Young Adult Fantasy Fiction genre, but I am so pleased to see that she appeals to a variety of age groups, and people who have never read fantasy before. I had one reader tell me that she had not read for years, but I had got her reading again, that comment made me so proud.

Currently I am writing book three in the series which will be called Calithia, Lottie Jones and the Magical Realms: Dragoron is the first in the series and introduces many of the characters that will feature throughout the series, the second book Lottie Jones and the Magical Realms: Veridian was published in August of 2020 and continues where the first book left off, both have been well received by my readers. I am lucky to have some great fans of the books that are eager for the next book in the series.

So about me, I have avoided that so far! I live in the United Kingdom in a lovely county called Berkshire with my husband. I am a mother of two and I have three wonderful grandchildren and a beautiful puppy has joined my husband and I recently (I think he thinks he is a velociraptor though, he chews everything!) I have a day job as well as my writing, I work in Finance and have done for many years. I am very much a contradiction, one aspect of me is very logical and I like things done in a certain way, but I also have a very creative side. I like to draw, paint, write poetry and novels. My perfect day is one where I can have a lovely walk in the countryside, followed by a nice lunch, a bit of writing and then to sit down in front of the television and watch an episode of Star Trek (I am a Trekkie) or a great film.

Now it is time to get back to my writing and to see what Lottie is doing today. If you would like to join Lottie on her adventures the links for both books are:

I was honoured to be asked to do this article by the Authors Lounge, and I would like to say a huge thank you to them for this opportunity.