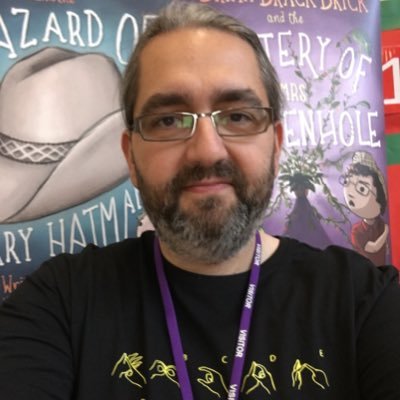 GR Dix brings the fun to your small readers!

Good news everyone – for all the people at Authors’ Lounge, and young readers everywhere! For the few of you who don’t yet know…. GR Dix, children’s author extraordinaire, brings you awesome news of a super fun series of books for your eager young readers: the adventures of Brian Brackbrick, and his best friend, George Bum!

Brian Brackbrick and George Bum are the heroes of the small town where they live. Brian is the one-hundred-and-thirty-eighth cleverest person in the world, and never leaves the house without a hat; George is Brian’s best friend, the nicest and most loyal friend anyone could want. The series of six books contains an overarching story regarding the mysterious Mr. Sparker, and his villainous plans for the town. In each book, Brian and George encounter one of Mr. Sparker’s minions, and must either defeat them or figure out what is really going on!

Books 1 to 4 are available now!

Book 1 – Brian Brackbrick and the Hazard of Harry Hatman:

Old Mr. Hatston has disappeared from the hat shop, and in his place is the very strange Harry Hatman! What does Harry Hatman want, and why is he so desperate for Brian to wear one of his ‘special’ hats? Can George Bum bravely save the day with a cupcake?

Mrs Blumenhole has ordered some unusual and strange new plants for the flower shop. What does this have to do with the changes underway at the pet shop? Why does Mrs Blumenhole seem so sad? Is she working for the mysterious Mr Sparker?

Book 3 – Brian Brackbrick and the Scowl of the Scorpion:

Carl Scorpion is coming! What does he want to do in the pet shop with the strange new animals? Did Mr Sparker send him? Why is Frankie Featherface so scared? Does Carl Scorpion really hate puppies?

Book 4 – Brian Brackbrick and the Melody of Morris Hawkwind:

Morris Hawkwind from the music shop has asked Brian and George to help with a special project: ‘Hawkwind Radio’! Could there be anything wrong with everyone listening to the same thing, at the same time…?

Books 5 and 6 are scheduled for release during 2021, so now is a great time to get on board with Brian and George’s adventures!

Book 5 – Brian Brackbrick and the Revelation of Raymond Rings:

Brian and George are investigating the appearance of a mysterious gold ring, leading them to the jewellery shop of Raymond Rings! Who does the ring really belong to? Will Mr Sparker finally be revealed?

Book 6 – Brian Brackbrick and the Menace of Mr Sparker:

Mr Sparker has appeared, and is intent on getting revenge on Brian Brackbrick and George Bum! Can Brian and George survive and save the day, when the whole town has been turned against them?

The author, GR Dix, is a scientific writer and consultant in his day job. He is passionate about encouraging reading and creative writing in children, and loves to visit schools to talk to kids about his books, whether in person or remotely. His love of books was reignited by reading stories to his three grandsons, and some stimulating conversations about names and ideas soon led to the appearance of Brian Brackbrick and his cast of supporting characters.

Brian and George always solve problems using logic, thoughtfulness and working it out step-by-step. The boys’ first port-of-call is usually the library, where they can find books on any subject, helped by the stylish librarian, Dr. Harley Letters. The other characters in the town include Fancy Nancy Sprinkle from the cake shop, Sergeant Shelley Shiplap the police officer, and Frankie Featherface from the pet shop.

The Brian Brackbrick series is available from Amazon on the link below: