From The Year Infinity by Lewis Feinland 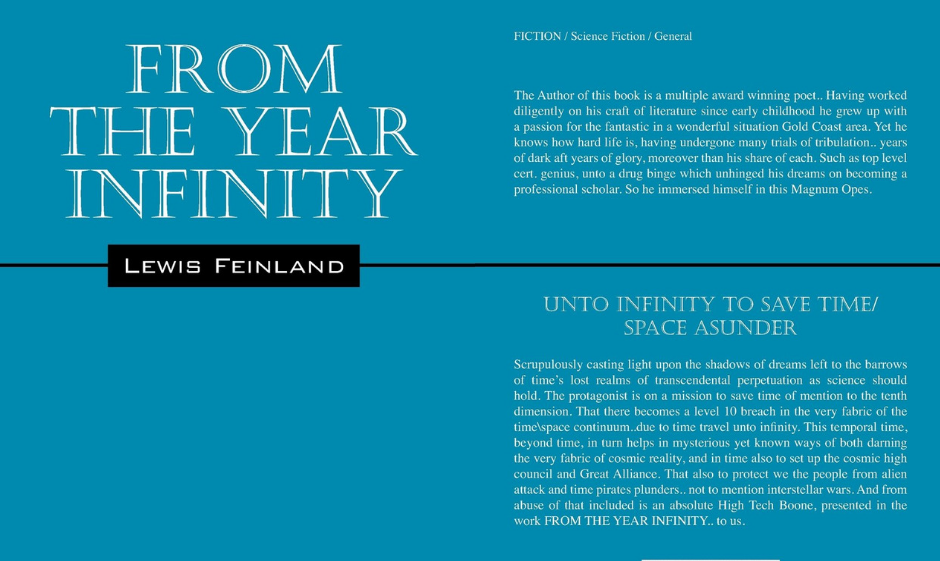 Multiple award-winning poet Lewis Feinland tried his hand at science fiction with From The Year Infinity (Outskirts; 2012). It tells about an odyssey mission to save the time-space continuum. Independent book review publication Kirkus Reviews has this to say about Feinland’s From The Year Infinity:

A godlike being who is an interplanetary Earth ambassador and a time traveler recalls his manifold adventures saving the cosmos in this debut novel.

At age 4, the supernatural entity named Lewis must take on human mentality and winds up working in a Connecticut office. Even so, his impressive IQ (described as the fourth highest ever) draws the attention of the U.S. Navy and Colin Powell. Lewis not only serves in the Navy, but is also appointed an Earth representative for the United Planetary Federation, even though assassinations disrupt the meetings—and in the remote future (or past), civilizations rise and fall and threats are fought (or will be).

Because Lewis marked his apotheosis by time-traveling to infinity, the fabric of reality has started to come undone. In fixing it, he meets Father Time (who really exists). Lewis embarks on epic exploits in his seven other immortal lifetimes.

Viewers of TV’s Doctor Who may enjoy the way Feinland, a poet, manages to make this highly experimental piece bigger on the inside than the outside—just like the time machine/spacecraft TARDIS.

In a slim 109 pages, Feinland info-dumps terabytes of sci-fi jargon; alphanumerics and acronyms; author references/genre shoutouts (John Scalzi); invented words (“cataclypse”); poetry; complex, technical manual-style instructions; and metaphysical musings. It’s the epistle of a sort of god or demigod who, while born on Earth, is actually of Olympus lineage (though Jesus crosses his path, as do the devil, Buddha, and Sitting Bull).

When the narrator speaks of seeing psychiatrists and getting a regimen of psychotropics, it begs the question of whether to interpret any of this literally or as the artfully described schizoid ravings of a lunatic savant off his meds: “From my office which was my enterprise, bridge command; sort from my helm..Or was enterprise is now plastic and the universally Messianic deed be done. Paradise lost be found, it’s heavenly response. Kingdom come and the last eternal link be round, that link being physically the mild core (plutonium 181) but not energy.”

To avid science fiction readers who would want to get hold of From The Year Infinity, Feinland highly recommends that they visit the Outskirts Press website at http://outskirtspress.com to order the revised version of the book.

Readers are also encouraged to check out the YouTube commercial advertisement for From The Year Infinity https://www.youtube.com/watch?v=0sUx8-4q_jU. The narrator, presumably Feinland, not only mentions the book but also invites viewers to check out the online shop of Space Fleet Insignia http://www.spacefleetensignia.com/ which sells authentic patches from different sci-fi branches such as Star Trek, seaQuest, Battlestar Galactica, and Babylon 5.

CRYPTICS FROM THE BEYOND- FROM BETWIXT