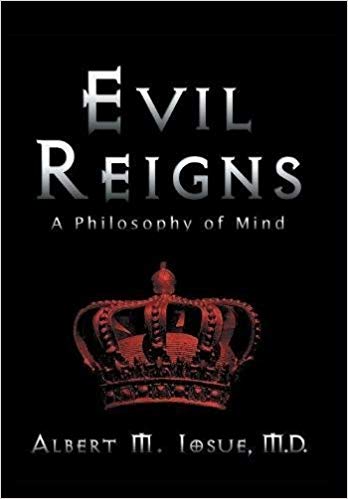 Evil Reigns is predominantly a philosophy of mind. Philosophy is the attempt to make experience intelligible.  In short, philosophy is a verbal art form; it is the art of explanation.  Evil Reigns is an explanatory concept of the human mind based on a self-psychoanalytic study! More specifically, it emphasizes the nature of the intellect and its role in the generation of evil.

Evil is defined as “the intentional commission of wrong.” Intellect is the source of all evil because of its ability to intentionally make choices.  Evil reigns expresses the realization that as humans are becoming increasingly intellectualized and increasingly affected by intellectual ideologies, the propensity for mass evil on the part of intellectuals in government, religions, and in positions of power is increasing.  In fact, as demonstrated by the horrific wars of the twentieth century, evil now reigns in the human race.

Of course, intellect is also the source of all good!  It is capable of intentional good and benevolent acts. Good and evil are the thesis and the antithesis of the human scale of moral judgments.  The problems is: good and evil are not balanced.  There is no end to the amount of good we will accept; however, there is a marked limit to the amount of evil we can tolerate, endure or survive.

The terrible and widespread suffering of the peoples in Europe and Asia that resulted from the intellectually-generated ideologies of fascism and totalitarian communism are prime examples of evil on grand scales imposed by individuals and their supporters who gained political power.

Intellectuals in society have long been the sources of disharmony, malignant criticism, social disorder, and destructive ideas.  This is because thinkers and writers do not fully understand the nature of intellect itself.  The intellectuals are made arrogant by virtue of education which they highly value. They use their talents in journalism, academic writings and books.  But intellect is an inherently critical organ and they thereby sow dissatisfaction and confusion, through wrangling, arguments, and discord.  They cause rumbling dissatisfaction with present institutions, traditions, morals, and government.

Intellectuals and academics have failed to understand that the human intellect was evolved to deal with the material world, with which it can generate miraculous products.  It provided humans with a second judgmental system that no other creature has.  The appropriate use of the human intellect is in the study of the hard sciences.  This is why the physical sciences have become so powerful and useful. But the use of the human intellect in other areas of human endeavor such as politics, sociology, psychology, religion, and economics, which are not subject to accurate intellectual understanding or conceptual analysis with which most others can readily agree, always ends up in conflict, unhappiness, and destruction. It is in these areas that the intellectuals have involved themselves to the suffering and deaths of millions of human beings who wanted nothing more than to live freely, enjoy their families and participate in life as their situations allowed.

The greatest curses are those intellectuals who have proposed ideas, not necessarily of how things are, but how they ought to be.  A prime example is Karl Marx whose proposed system of communism was instituted by Lenin and imposed by the communists upon the people of Russia.  It resulted in the intentional deaths by starvation and arbitrary execution of millions of their own countrymen.  The worship of intellect is essentially the worship of a false god; the worship of an evil intellectual is the worship of a devil!  I believe Adolph Hitler might qualify for this role.

The book discusses the evolution of humankind’s dual psychic nature comprised of intuitive and intellectual judgmental systems operating simultaneously and using different languages.  These generate two mental worlds of Actuality and Reality.  They make fundamental judgments about the world expressed as the phenomena of being verses existence and knowledge verses understanding.  These are referred to as ontoic and epistemoic judgments.  Those of the intuitive judgmental system are the ontic and epistemic judgments; those of the intellectual judgmental system are the ontological and epistemological judgments.  These are judgments that yield beings and knowledge on one hand and existence and understanding on the other.  These comprise the roots of the worlds of Actuality and Reality respectively.  This book is dedicated to the final understanding of the nature and operations of the human brain-mind and its phenomenal manifestations which result in human action and behavior.