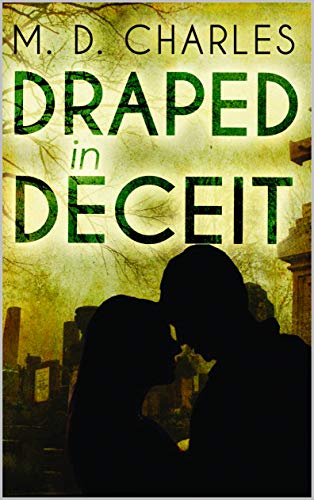 First, I would like to thank the Authors Lounge for allowing me this platform.

My novel, Draped in Deceit is a young adult, coming of age series following the lives of four college kids and begins as seventeen-year-old Dan Trennan is trying to cope with the death of his adoptive mother and seeks comfort from estranged girlfriend Nicola James. But with thoughts of his birth mother surfacing, Nic agrees to help find her and so, together, they begin to plan out that search. Finding his birth certificate whilst searching his adoptive father’s office spurs them on but they also find a letter addressed to his father, Greg from his wife Fran. Though intrigued, Dan replaces it unread, much to Nic’s frustration.

During this time, Dan and Greg’s relationship breaks down and his sister Charlotte’s withdrawal only adds to his worries. Two unexplained deaths follow and arguments erupt and yet more accusations fly, not least between Dan and Nic, but that break-up simply allows another friend, Jules Harvey the opening she’s been hoping for with Dan.

With everything in pieces and friendships all but broken, can any of their lives resume any sense of normality? Will Dan and Nic have any chance of finding their way back to one another? But with a premonition of Nic’s death, any rekindling of their love seems impossible.

In the first place, Draped in Deceit was simply an idea I had of four friends. That idea stayed with me and different aspects of the story began to evolve in my mind and over time it grew and those friends lives developed along with it. But there wasn’t one specific thing I could pinpoint that I wanted to write about in the first place. However, once it was down on paper, it just ran and ran.

Draped in Deceit is the first of a series of three books. But I would love to write a fourth which would go back a generation and delve into their parents lives as they grapple with issues that blighted their own relationships and how they ultimately dealt with them as the third book in my series outlines. I am currently writing a stand-alone novel but the issues are very emotive and I hope, hard hitting.

My writing really began in 2014 though I have been writing seriously for twenty years. But this was when I decided to self-publish. There were challenges but I met them and I hope, I learned from them. I grew as a person at this time, more I think, than any other. I learned so much more about myself. But, winding back some years when my children were very young, I’d just finished university, studying art, believing that path would take me into teaching as I’d planned to do. How wrong I was. That was at the very beginning of my journey with many twists and turns that had yet to be negotiated. Intent on pursuing my dream of writing, I began sending my manuscript to agents and publishers alike, confident that one day I would attain that dream. But the inevitable rejections followed but that only served to strengthen my resolve. And so, I carried on, each time believing this could be it. The years rolled on though without that anticipated success and with my day job keeping centre stage. Redundancy followed but as it turned out, that would be the turning point.

Settled in another job, a friend suggested the self-publishing route. I don’t mind saying, I was sceptical at best and looking back, I suppose I didn’t really believe in myself. But a gentle nudge got me back on track and I finally embraced that idea. Like I’ve said, self-publishing wasn’t an easy option but with continued support from my family as well as my friend I embarked on my publishing dream. Although many supported me in purchasing my book, I wasn’t selling anywhere near enough copies to give it the sort of platform it needed to be noticed and I knew I had to be more direct. And so began my attendances at craft fairs and to my satisfaction, I did gain some success but it still wasn’t achieving the level I’d hoped for.

Returning instead to the treadmill that traditional publishing had become for me, I edited my story once again, even though Draped in Deceit was already out in print and I mailed it off to yet another publishing house and this time it was accepted and even though I’m back at the beginning of my latest journey, I’m eager to find out how this chapter unfolds.