Dragons in the Clouds by David Blair 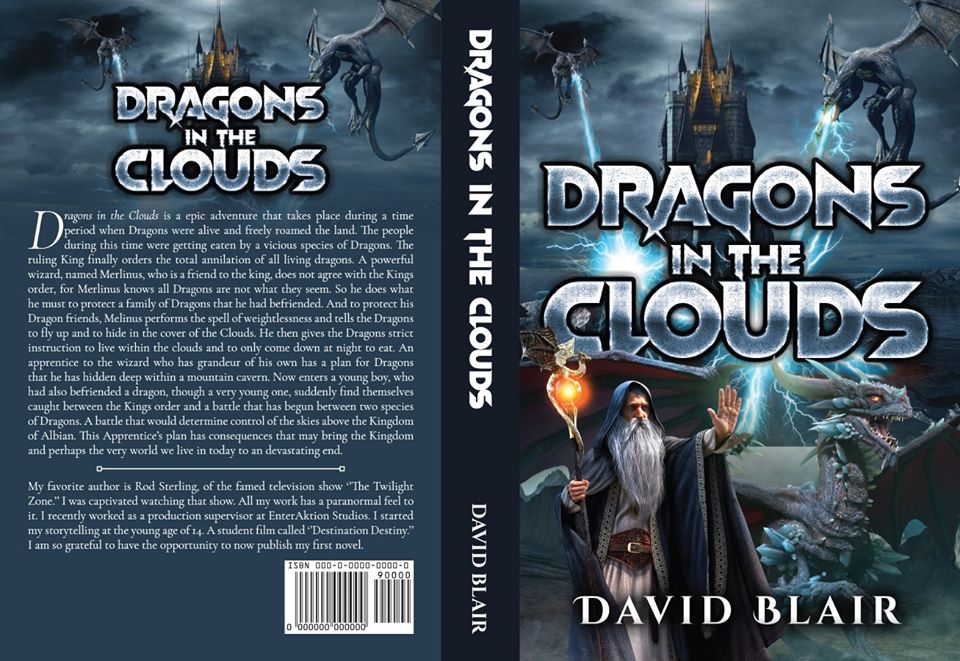 Dragons in the Clouds is an epic adventure that takes place during a time period when Dragons were alive and freely roamed the land. The people during this time were getting eaten by a vicious species of Dragons. The ruling King finally orders the total annihilation of all living dragons. A powerful wizard, named Merlinius, who is a friend to the king, does not agree with the King’s order, for Merlinius knows all Dragons are not what they seem. So he does what he must to protect a family of Dragons that he had befriended. And to protect his Dragon friends, Merlinius performs the spell of weightlessness and tells the Dragons to fly up and to hide in the cover of the Clouds. He then gives the Dragons strict instruction to live within the clouds and to only come down at night to eat. An apprentice to the wizard who has grandeur of his own has a plan for Dragons that he has hidden deep within a mountain cavern. Now enters a young boy, who had also befriended a dragon, though a very young one, suddenly find themselves caught between the Kings order and a battle that has begun between two species of Dragons. A battle that would determine control of the skies above the Kingdom of Albian. This Apprentice’s plan has consequences that may bring the Kingdom and perhaps the very world we live in today to an devastating end.

“Dragons in the Clouds” started with the song, “Puff the Magic Dragon”. I always did loved that song and I thought it would make a great story. As I was creating the dragon story based on Puff, I read in Variety, an industry magazine that Kennedy had bought the rights to Puff. So, in part of the story behind Dragons in the Clouds is “Puff” but then the story started taking on a life of its own. And became it’s own original story.

I believe it’s for all of us who believe in the magic of imagination. I know, cliché’s

They can expect the ride of their life, for sure. There is a lot of action. Dragons battle it out among the clouds. Lightning strikes are dragons blowing fire and thunder is a Dragons roar. My wish is that when this generation and future generations see lightning and thunder storms, they think of Dragons battling it out for domination of the skies above. Also I want readers to be inspired to have the courage to continue going what they dream of and to never give up.

To get it produced into a movie. The story is a cross between Harry Potter and Jurassic Park. And something more about yourself. My most favorite and influential writer would be Rod Sterling, of the famed television show The Twilight Zone. I was captivated watching that show. My favorite author is Charles Dickens. A Christmas Carol to this day has a place in my heart. All my work has a paranormal feel to it.