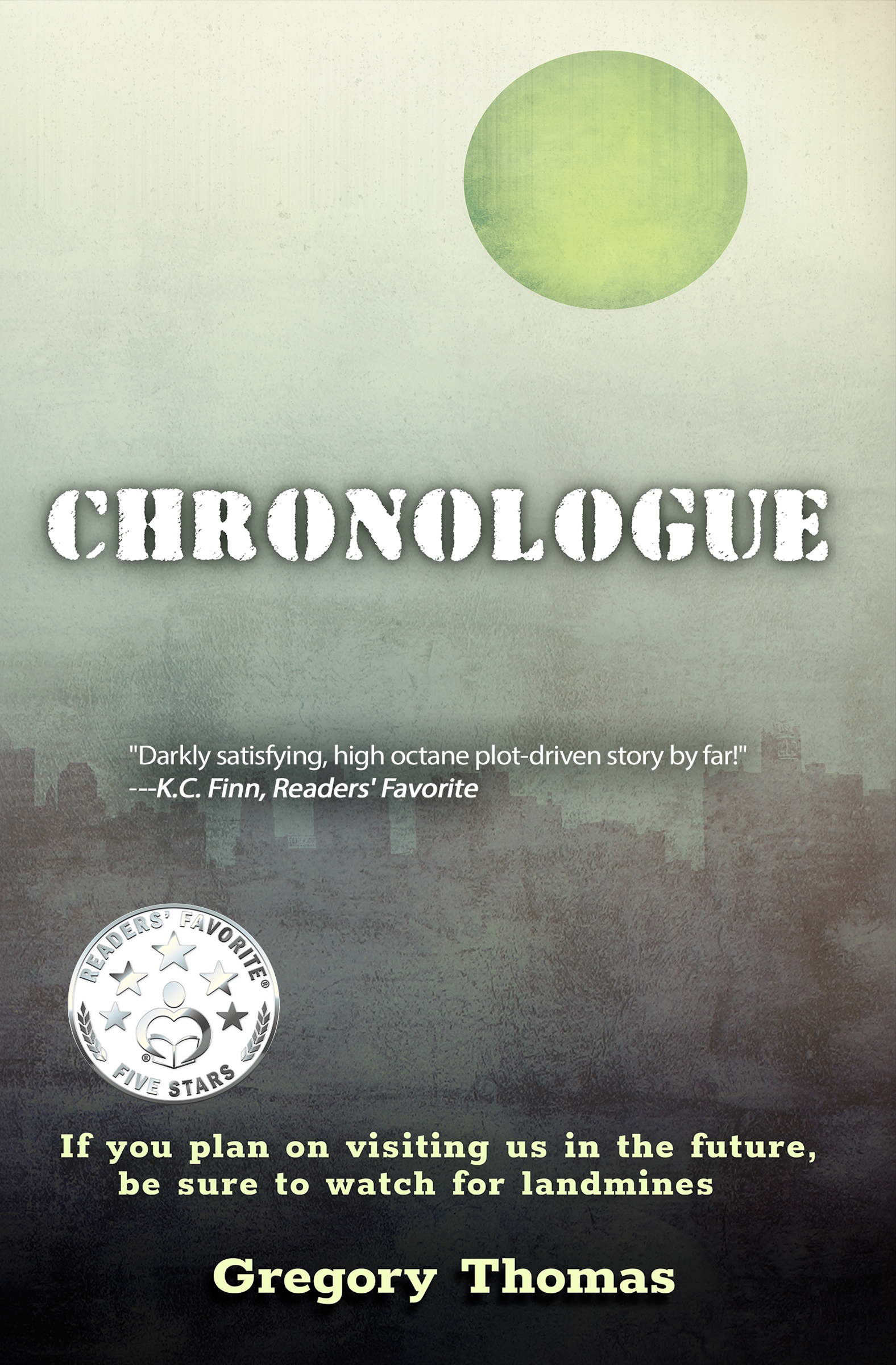 In the year 2257, humanity as we know it is challenged when an AI threat called The Avalon Republic manages to self-replicate itself. By the hand of the insane mechanical overlords, America and the other countries are put to the test as the green eyed apparatus’ hack our AI powered cars and technologies, clone their mechanical militia, and lay siege to our world in their efforts to turn humans into other machines. The Fight War wages as we send forth boots on the ground with our flags swinging through the air in bulk to defend our world. The fate of all existence lies in our hands…

Should we fail, all hope will be lost.

Chronologue is a science fiction Dystopian based in the 23rd Century future of America. Technology has greatly increased, with the invention of AI and automatons. Packed with an exciting and engaging storyline that will keep you on your toes!

Rich with interesting characters and intense moments, and riveting portrayal! Experience the thriller as humanity fights to stop the rise of the Avalon machines!

The book takes place in the year 2257 AD, where technology has taken complete control over everyday living. Fast food restaurants all have robot chefs and robot butlers. People all mostly work from home, or through a hologram projection. However, since technology has taken control over the atmosphere, out of nowhere this AI threat manages to self-replicate itself. Able to think, feel, and make their own decisions, The Avalon Republic of machines believe that in order to achieve a true utopia, since robots do everything for us as it is, robots must be ‘smarter than people’ and humans and machines should all become one entity.

Also in the book, Aids has went airborne, and is now the Everything Virus, combining with all other sicknesses, it infects objects, and is so devastating, that it’s even depleting Earth’s oxygen. To combat this, we put in our bodies, robotic nanochip technologies called Medalight, which changes our DNA, overseers our minds and brainwaves, controls breathing and blood function…But since we now have a robotic antibody in our bloodstream controlling everything. The Avalon androids now have the means to ‘hack people’ as though they were machines. They are using the Medalight to control people’s minds, and keep them from dying.

The moral is to warn readers about the dangers of letting society lose its humanity, and how we shouldn’t let technology take over our day to day lives in a way that it would be overbearing.

What inspired me most to write Chronologue, is that I wanted to deliver a world that was close to our time period, but will expand upon what we have right now! Featuring a new type of fantasy world that would be captured quickly, something relatable to everything in the world today. Then I based that world over 200 years into the future, and open readers to a brand new world that reminds us sorta like a world of our own, but is distant, like an alternate war torn conspiracy field Earth.

Morals and ethics are challenged and put to the test, as people fight to maintain their world. Also note that I add in humor into the book to lighten the mood and tension from time to time. Though cursing, mild violence, and hair raising situations are prevelant all throughout the novel, I try to steer Chronologue toward a PG-13 audience.

I want readers to learn of the possiblilities of the future! The new technology that could be created if we were to only but expand our minds to new ideas. However, I also wanted to remind society and readers of the impending dangers that could befall our society, if we allow technology to control and enslave our world. The main theme for Chronologue is the dangers of a dehumanized society, and how if we forsake our emotions and humanity, we begin to behave and look more and more like a machine–emptied of heart, and void of life.

I have movie plans for Chronologue, and am already hard at work almost done with the sequel to the series; Severance, of which will take place 8 years after the Chronologue. Severance will feature old characters aged 8 years older, while including new characters each with different personalities aside from the rest. In where Chronologue is written from a character’s perspective most of the time, the sequel will talk more in depth about how society has been impacted due to our battle with the slaver Avalon Republica Threat; go more in depth of the dreaded impact of the Super Aids virus, how invasive the government has become in watching society unbeknowst to them.

After Severance, I have several more books that I have in the series to be written, and with each I am longing to give their own movie.

I have been writting since I was 9 years old, and Chronologue is my very first published (self published book). Out of all that I have written, Chronologue is the only book I completed. I have my writers blog @Cascadialegends.wordpress.com where I post my poetry, blogging posts, and other writing. My book can be found on Amazon for ebook and paperback purchase!

I am a Bachelor’s of Science Graduate for Computer Information, and graduated Alumni from Strayer University. I am also an artist, of which my artwork can be found on my instagram @Youruncle_gregpaints

I have four sisters, no brothers, and several nieces, nephews, and even great nephews. I like to think of myself as Everybody’s Favorite Uncle, and hopefully my work brings smiles to your faces. 🙂 Thank you so much for allowing me to post my article on your site here at Authors’ Lounge! It was a pleasure!