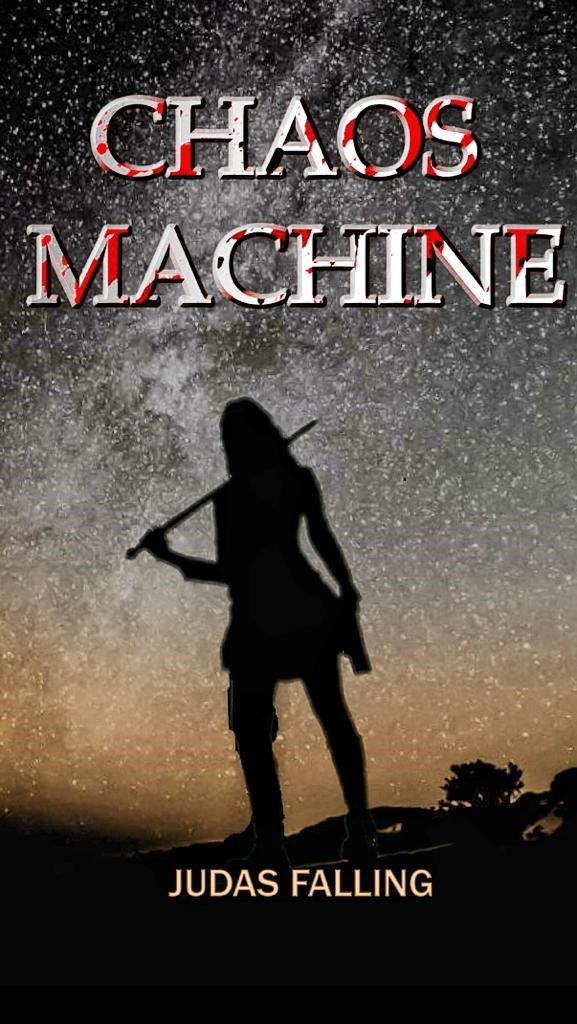 Firstly I’d like to say, thank you Author’s Lounge for this opportunity to tell you all about my debut novel Chaos Machine. It is a Sci-Fi horror story set in the very distant future on a terraformed planet in the Andromeda galaxy. Warp drives and Faster Than Light travel do not exist. The trip to the planet took millions of years onboard Duat, a mega sized intergalactic spaceship crewed by immortal clones genetically designed for space travel and planet colonization. Thousands of years before our story begins a mutiny onboard Duat has left seven of the colonizer clones marooned on the planet. Surrounded by the savage primates they had seeded the planet with.

Stranded with a very minimal amount of their space age technology this small group have created a life for themselves on the planet. They have also recently started producing hybrid offspring with the primitive primates inhabiting the world. Provenance is one such hybrid and the first to show signs of fertility and an ability to reproduce offspring of her own.

Provenance can see the writing on the wall and is not going to end up as a breeding factory for the colonizer’s new race. Her father the colonizer Pilot has his own plan and it seems he always has.

The story began as a sci-fi interpretation of the Garden of Eden story in Genesis. I’ve always been fascinated by the demonization of Eve and the Serpent in that telling. I like to exist and if you follow the logic of the story we exist because bad actors did bad things. I wanted to take a more sympathetic POV of those two characters in particular. My plan was as simple as that but once I started the researching and writing process I found the themes of female reproductive rights and slavery were unavoidable. Quite frankly just writing the book gave me a different perspective on the subtleties and nuances of domination. I like to think writing this book made me a little more woke which I would not have anticipated.

My favourite things are sci-fi, ancient history and mythology. I always knew I would write sci-fi, I just needed to figure out how to include swords, shields, spears and phalanxes. I do believe any readers with similar tastes will love this book. It’s Krull meets Dune meets Planet of the Apes.

The very first words in the novel are, ‘Resist and defy’. The colonizers have ended up marooned because the dogma they religiously followed through millions of years in empty space faltered upon contact with a new galaxy. Provenance can see her life’s options narrowing down to a path not chosen by her. I would hope readers will see the folly of blindly adhering to traditions that were set down in another time and place when the situation was different.

Chaos Machine is book one in a trilogy. Book two will be releasing in 2021 and book three I haven’t actually written yet. I have many more ideas for this universe and its characters and who knows? Right now I can see another trilogy in it further down the track. People who have read the book so far all make the same comments, everyone loves Provenance. I love her too and I wish I could take credit for creating her but she seemed to write herself and she never did any of the things I had planned for her in my outline which is a bit strange and scary!

My ‘day job’ is a stand-up comedian. I have over a hundred television writing credits, one produced feature film written by me, dozens of short films [one made it into Cannes] and a lot of radio work. BUT don’t go looking for jokes in this novel. It gave me great pleasure to not look for punchlines to every paragraph for the first time in twenty years!

I also host the podcast Satan Is My Superhero. In keeping with my fascination for how poorly treated the serpent is in religion it is a podcast with a sympathetic view of the devil and its role in culture and imagination.