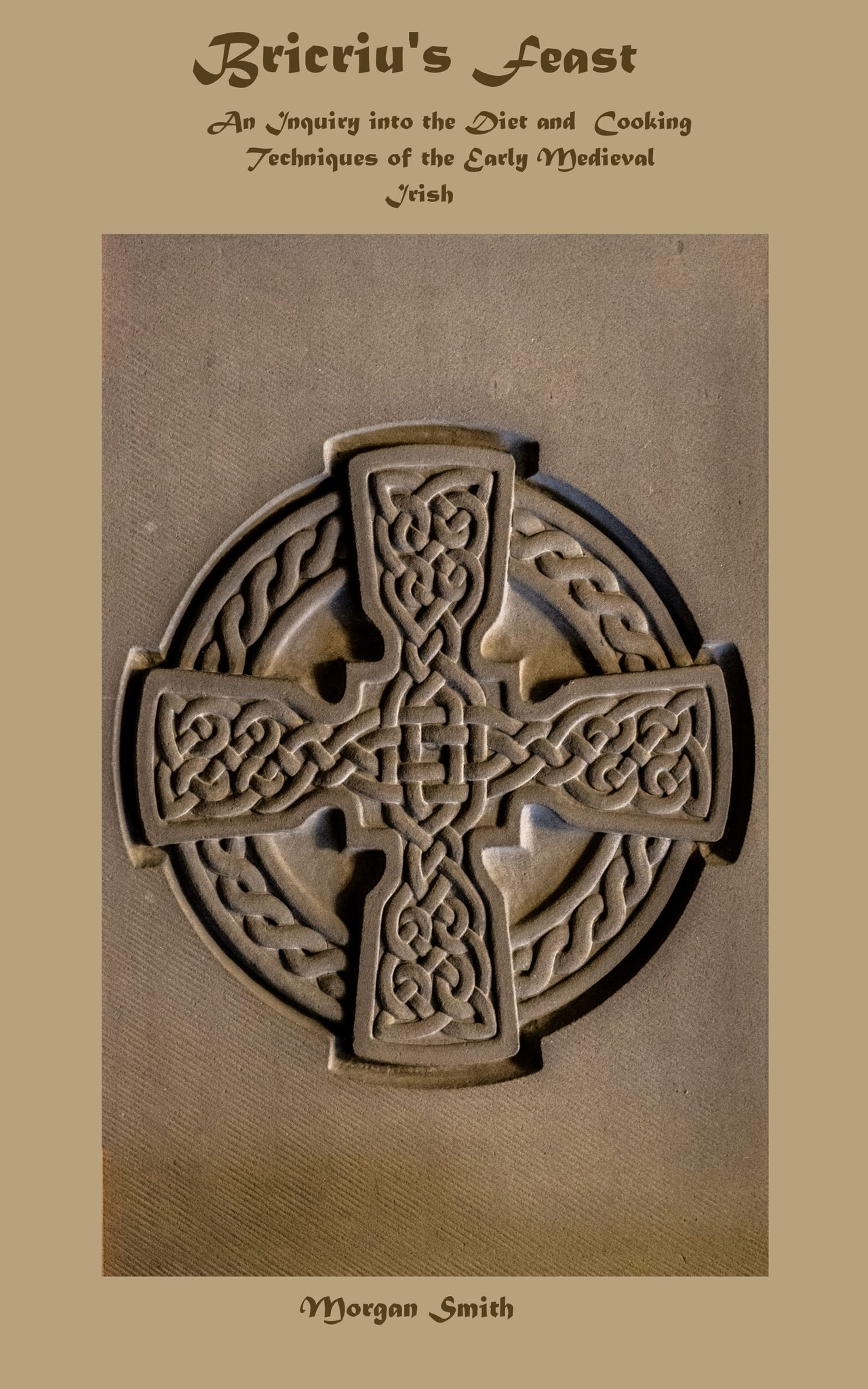 First things first: this isn’t a cookbook. There are virtually no recipes in it. It’s a compilation of several years of research, using extant finds, orally transmitted myths, and what little written evidence there is.

The source material is varied: it’s a tricky problem to research times and places where cultures were almost or entirely non-literate, and all the more so with things that leave so little material evidence of their activities.

The book started, oddly enough, not with food, but with textiles archaeology. The production of cloth and clothing in the early medieval period in Northern Europe was an ongoing research area for me, even before I studied archaeology formally. I was involved in re-enactor groups, and combined that with my lifelong interest in spinning and weaving (I learned to weave in high school, and it became an obsession, really).

That led to an interest in domestic life in general: how ordinary people lived, day to day – which then led, quite naturally, to food.

Ireland in particular was of interest to me, largely because there seemed almost nothing to go on and plenty of misconceptions. People seemed to think that if there weren’t any written records, Irish people must have been incredibly backward and barbaric, yet the archaeological record suggested a very vibrant and sophisticated society, albeit one unlike much of the rest of Europe.

I started collecting bits of information about food and cooking methods, and stockpiling it. I had no plans to write about it – it was just interesting to me. Remember, this was back in the ‘90s, so it wasn’t as easy as it might have been if I started now. I bought books, copied articles, made notes on 3”x5” index cards, like that.

Things started piling up. Stacks of Xeroxed journal articles. Towers of books, with yellow post-it notes sticking out of them. Scatters of the index cards. The dining room became a minefield – navigation through there to the living room was a bit fraught, and you had to pick your way through very carefully.

And one day it dawned on me that if I wrote it all up, I could maybe make some sense of it all, and then maybe be able to eat in the dining room again.

I had no plans to do anything with this. It was just a way to organize my understanding of what I’d learned, pack up all the books and bits, and maybe move on.

Fast forward to 2018, when I had published a couple of fantasy novels based on Celtic and Norse cultures of the early medieval period, and had a bit of a handle on the self-publishing thing (it’s interesting what one finds to do in retirement!), and decided to throw this out there.

I didn’t know if anyone would be interested, but it did strike me that at least the re-enactor community might find a use for the information, since it would save someone else with a similar interest some time and effort.

The other spin-off benefit is that writers who are looking at creating fantasy or historical fiction with an early medieval “Celtic” slant can also find it useful. World-building is difficult, and food is an area where writers very often default to “bowls of stew and hunks of meat”. That can get a little boring for the reader.

But I also, when getting this ready for publication, wanted it to be accessible to non-academics who might just be plain interested, with no practical “goal”. I rewrote it to be a little bit more lighthearted, because part of its interest might be that food is a social thing. Eating and drinking is something we all share. It’s a way we all come together, in celebration and in sorrow.

As I said, I didn’t know if anyone would be even the tiniest bit interested, but there I was wrong. People are interested. Witness this article for Author’s Lounge, and the fact that Bricriu’s Feast sells more than any other book I’ve published, which is both astonishing and encouraging, and suggests that the book industry in all its permutations is a lot wider and more diverse than anyone can imagine.

Morgan Smith is a former goatherd, a textiles geek, and occasionally an archaeologist. In addition to “Bricriu’s Feast”, she is also the author of several fantasy novels including “The Shades of Winter”, “Casting in Stone”, and “A Spell in the Country”, a romantic fantasy called “The Mourning Rose”, and a memoir about growing up hippie in the 60s. Her life is held together by caffeine, cigarettes, and cheap granola bars, and she will drop everything to go anywhere, on the flimsiest of pretexts.