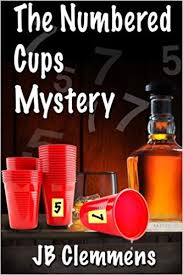 When I think of crime fiction, I think of Truman Capote’s In Cold Blood, Sir Arthur Conan Doyle’s The Hound of Baskervilles, and Agatha Christie’s Murder on the Orient Express. These timeless classics have endeared readers with their unforgettable characters, riveting storylines, edge-of-the-seat mystery, and plot twists. In recent years, several works such as Stieg Larsson’s The Girl with the Dragon Tattoo, and Gillian Flynn’s Gone Girl have garnered commercial and critical success. Another crime fiction author making waves today is JB Clemmens. Clemmens has published a series of crime novels. One of them is The Numbered Cups Mystery.

In 2015, JB Clemmens published the mystery crime novel The Numbered Cups Mystery. It is part of the Lieutenant James Mysteries It is the fourth book in the series. This time the good Lieutenant James must solve the murder of a local celebrity writer.

Walt Whitlock was found dead at a barbecue party at the Townsend home in Winburg. The initial investigation showed that he was poisoned. James finds the tainted bourbon not only in Whitlock’s #5 cup but in one of the several cups marked #7. Although he uncovers the reason for so many #7 cups, he still must find Whitlock’s murderer.

Lieutenant James must then investigate a number of individuals as persons of interest to the crime. They include the elderly neighbor, Lucy Trent, brought the pint bottle of Starsilk Preferred Bourbon to the picnic, and Walt Whitlock’s publisher, Oliver Townsend, whom Walt had an argument with just before he died. However, both Trent and Townsend claimed innocence.

Another subject of James’ investigation is Eileen Forsyth, another guest. Her fingerprints are found on the poisoned cup. John, a college friend of Walt’s, suddenly disappears after the party. All these individuals, along with a missing document to a dead woman’s will, and the strange happenings at a local racetrack form part of Lieutenant James’ investigation to identify and arrest the man behind the numbered cups mystery.

JB Clemmens’ The Numbered Cups Mystery is gripping and incisive from start to finish. If you like Sherlock Holmes or Agatha Christie’s The Murder of Roger Ackroyd, then I recommend JB Clemmen’s fourth book from the Lieutenant James Mysteries.

Other Works by JB Clemmens

JB Clemmens is a former high school Math teacher. She is an avid of crime fiction having relished books by Christie, Wolfe, Marsh, Grimes, Childs, and many others. Clemmens lives in Pennsylvania with her husband. She likes writing and has already published several books. Her first book, Jigsaw, is the fictional adventure of two women, who decide to walk from one city to another after a gasoline ban. Her Lieutenant James Mysteries Series includes Something Fishy in Manhattan, A Substitute for Murder, Mystery at Pima Point, and The Numbered Cups Mystery. Clemmens is also the author of Death in Sequence. All her books are available on Amazon.

JB Clemmens is currently finishing three years of research for her next book about 1969, Upon the Moon and Woodstock.