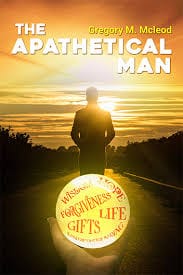 The Apathetical man is a memoir that tells the journey of a man who found God and overcame alcoholism and addiction.

Redemption is a gift only if we choose to accept it. In these times of uncertainty, anger, prejudice, selfishness, and pain, God always offers us His unconditional love. We can always go back to Him and choose to live life in peace and kindness. There are many of us out there living in sin and darkness, and they need to know that it is never too late to change. Today, Our featured book is written by someone who has seen dark and terrible things. Author Gregory Martin Mcleod never thought he’d overcome alcoholism and drug abuse. He been broken many times, became alienated from family and friends, and went to rehab multiple times. And then he found God. The Apathetical Man is a memoir that tells the inspiring journey of a man who found God in a very unlikely place.

Originally published in 2010, The Apathetical Man is a memoir by Gregory Martin McLeod. In this book, McLeod details his encounter with alcohol, and eventually with drugs and how his life was dominated by addition. He also shares the events that lead him to find God. This encounter would eventually be the key to McLeod’s spiritual and physical healing.

In this 712-page book, Gregory shares to readers how at age 12 he began smoking cigarettes. A year later he began drinking beer, smoking weed, and became a member of a gang. Gregory eventually became a full-blown alcoholic and began taking chemical drugs such as Valium, LSD, Quaaludes, cocaine, and other stuff. He also went on to try morphine. When he was 16 years old, he was confined to a hospital for a year. This would be the first among the many times that Gregory got admitted to an institution because of drug abuse. Soon after, he was ordered by the court to be admitted to an alcohol and rehab facility with two years probation. This cycle would continue very well into his adult years until finally, Gregory admitted to being sick and agreed to see a doctor.

However, his job as an electrician was too risky that Gregory decided to quit on his medications. This resulted in relapse and he found himself back in the rehab. His life-changing moment came after his 10th stint in rehab. There, Gregory met a doctor and a pastor. The doctor asked him two questions: “What do you want us to do for you here?” and “what do you want to get out of your stay here?” McLeod knew that for his treatment to be successful, he needed something more powerful than physical healing or therapy. By this time, he was fully aware that his battle with alcohol and drugs was more spiritual than physical, and that he needed God to help him.

Gregory started acknowledging God’s presence and the importance of small group meetings headed by the pastor in their rehab center. He also worked hard on his rehab program and rigorously followed the 12 steps of AA (Alcoholics Anonymous). Today, Gregory McLeod has been clean and sober for more than 12 years. He also imparts his inspiring journey to others who are suffering or on their way to rehabilitation through group discussions and blogs.

The Apathetical Man contains 12 chapters filled with inspiration, faith, gratitude, and God’s wisdom. It is a truly inspiring read during these dark and troubled times.

For more information about Gregory McLeod’s The Apathetical Man, you can visit his author website or grab a copy of his book today.

Gregory Martin McLeod was born on December 25, 1964. He was a shy young boy who did not receive good discipline when he was growing up until he was about 10 when he started getting into trouble more often. Eventually, Gregory became involved with alcohol and drugs early in his teens. Because he was shy with people his age, he often hung out with people older than him. At age 14, Gregory became a full-blown alcoholic and a drug user. The people he spent time with are also into these things and may have influenced the young Gregory to experience these liberties at a very young age. Gregory was later diagnosed with bipolar disease and according to him, was sent to a psychiatric hospital when he was just 16 years old. Gregory recalls how his life was dominated by sin (sex, drugs, and alcohol). But with the help and grace of God and those who love him, Gregory is now a clean and a changed man (he’s been sober for more than a decade now). His book The Apathetical man is a chronicle of his journey and a testament to God’s grace.