Behind Closed Doors by CR Saxon 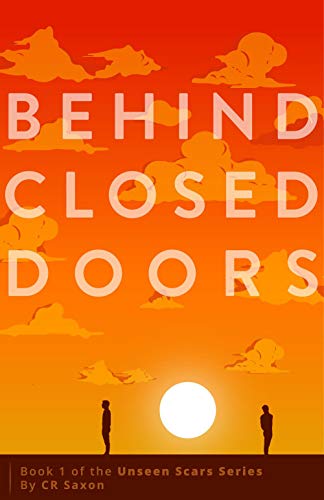 Stories about socially outcasted super teens saving the world come a dime a dozen.  This is a fun trope many enjoy exploring.  But I’ve always wanted to see it done realistically.

The social outcast doesn’t have two best friends or anyone he feels he can rely on – because he’s a social outcast. Yes, there’s someone who has to deal with him, but there’s no love lost between them. His epic struggle to save the world leaves him broken – because he’s a kid without the skills or social support needed to withstand a major tragedy.  There’s no walking off into the sunset with the romantic interest – because there isn’t one.  What social outcast has time to meet someone and develop feelings when millions are dying and no one is listening?  And after everything’s over and the world is saved, millions have still been affected.  Millions are still suffering.  Everyone just wants to get back to normal life – even if nothing’s normal anymore.

Behind Closed Doors begins here in the aftermath and follows Ferdinan Samultz and other survivors of the deadly disease that killed over eight million people – wiping out whole communities, devastating countries, and forever changing the course of the future. Far too many are grieving the loss of family and friends.  But for Ferdinan…

Due to the teenager’s expertise and focus on developing various medical equipment and medicines – Ferdinan found himself as the lone scientist trying to figure out the disease after an old friend told him about it and asked for his help.

Ultimately he beat the plague, but not before failing millions of people.  Blaming himself for not being fast enough, Ferdinan took on the responsibility of all those deaths and it broke him.  Problem is, he can’t let anyone know.  Not that he would even if it was ok to do so.  This leaves Ferdinan struggling to adjust back to daily life on his own.  The grief and suffering of those around him only intensify his guilt and further convince him he has no right to mourn his own loss and that he deserves punishment – even though none is coming.

My goal in Behind Closed Doors is showing various ways grief affects people and how different people go about dealing with it.  I also want to show how mental illness, abuse, and grief affect not only the person suffering, but those around them, as well as calling out the stigma of discussing such things. More so, I want to impart understanding.  I do this by showing the characters’ internal struggles within the safety of a fictional world.

Instead of Hollywoodizing mental illness, it’s shown in a realistic way so the reader can form a deeper understanding of what it’s like dealing with these issues.  Mental illness, abuse, and grief aren’t always easy to see.  Pretending everything’s fine is common.  It’s simple convincing others nothing’s wrong.  Which is why the reader gets to see the contrast of what characters are thinking and feeling vs. what they say and do.  I hope it’ll help the reader recognize the signs of distress in those around them and develop empathy toward those who are suffering.  And for readers who are suffering, I hope they can feel like they’re not alone, they’re not beyond hope, and encourage them to seek or accept help instead of suffering on their own.

Behind Closed Doors is a powerful stand alone book, as well as the first in an eight book series called Unseen Scars.  There will also be a prequel.  Throughout the series I explore various aspects of the healing process and do my best to present it realistically.  Far too often the healing process is shown as this linear thing when it’s not.

Unlike in most stories, the protagonist doesn’t keep getting worse, spiraling until he admits he needs help – then life just gets progressively better. Instead I show it’s normal to experience setbacks and be frustrated by it.  The simplified “happily ever after” healing so commonly done leaves many people with unrealistic expectations. In reality it’s slow and fraught with difficulties and that’s important to understand. It’s ok to be frustrated with yourself or the person you’re sticking with who’s dealing with these issues. Healing takes time.  It’s not easy, it’s not quick, and sometimes it feels like it’s not worth it.  And it’s ok to feel that about yourself or the person struggling, but it doesn’t mean it’s not worthwhile or that it’s a waste of time.  It’s ok if you digress.  You’ll get there eventually and it’s worth the struggle for the peace you’ll find at the end.

And I hope that it’ll be comforting or inspiring to those who read it.

If you’re interested in Behind Closed Doors, it’s available on Amazon in paperback and Kindle: