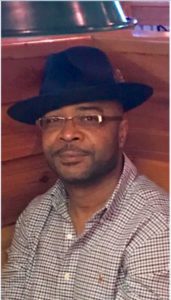 Alan Lemetri Alston Sr. was born December 2, 1969, in Louisville, KY. One of 5 children born to his Father and Mother. Alan grew up in the Beecher Terrace housing projects. At the age of 17, Alan was a Father of three. At 18 Alan received his G.E.D. but was determined to walk down the aisle in a graduation ceremony so he was enrolled into Butler Tradition High School where he walked in 1989. At 21, Alan began Fathering his fourth child. Struggling to find reasonable employment Alan worked to support them. Things were rough financially until Alan received employment as an assembly line worker in the auto industry. Ambitious and hopeful Alan began writing poetry that was encouraged by his coworkers who challenged him to enter a contest. In 2002, Alan married his Wife Keleshia and they have 2 daughters.

In 2006, one of Alan poems was published in a collection with the International Society of Poets as an inductee. Alan became a published author of this first book of poems in 2008 the same year he began a new career in Heating and Air Conditioning. Alan also started Alston Properties LLC after he left the auto industry. In 2010 Alan graduated from Jefferson Technical College at the age of 40. Currently, Alan is working in the Heating and Air Conditioning field. Enjoying life, as a Grandfather of 3, with his Wife and their newborn daughter.

205 Thoughts from the Heart of a Man, is a collection of poetry for encouragement and guidance from a Man’s prospective. The content of this book is from the brokenness of a man who has accepted his mistakes and successes. In our quest for peace, a person wants to be sure that there is hope. Suffering will come to us all but we must endure till the end. Since I’m open about loving me for who I am and not for what I’m worth then I have succeeded in expressing the feelings of most of my audience. Therefore expressing my thoughts openly to my audience I gain joy in knowing that others actually feel the way that I do about life. Some may be afraid that others might judge them for saying what’s on their heart. When you read my poetry keep in mind I have opened my heart up to you the reader. Make no mistake of my motive. My sole purpose is to be transparent so that others can see they’re not alone. Remember, I have fallen several times as we all do- but I will get back up so others may learn from my love to preserve. Love is the core of the book, that’s why I exist. Enjoy with hope and thanksgiving. Love and blessings to you Sincerely. Alan Alston Sr.