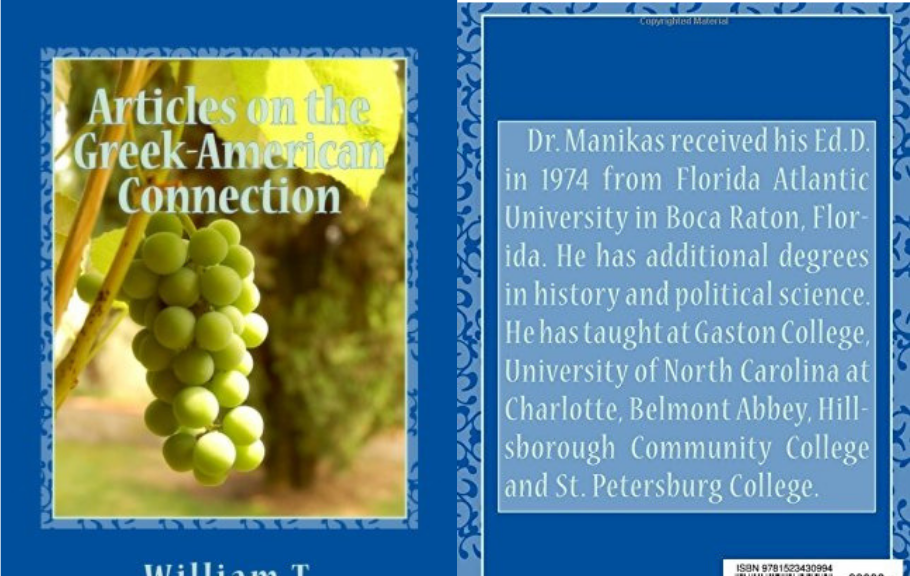 The purpose of this undertaking is to bring together a collection of works to show the historical relationship between Americans and Greeks. Greeks struggled for their independence from the Ottoman-Turkish Empire in early nineteenth century. Many private American citizens played a role in aiding the Greeks in their struggle for independence from the Ottoman-Turkish Empire. Americans viewed Greece as the birthplace of Democracy They identified Greece with the philosophers, mathematicians, play writers, and heroes of the Golden Age of Greece. The Philhellenes felt a strong attachment to Greece and personally witnessed the hardships of the Greeks under Turkish rule.

Fewer than two thousand Greeks were in the United States before the 1880’s. From 1820 – 1840 nearly half a million European immigrants came to the U.S. Almost none were Greeks. It was difficult for Greeks to leave because they were subjugated under the Ottoman Empire. The Greek immigrants were the last of the Europeans to come to America.

Many Greeks came from the Aegean Islands and Asia Minor to escape the harsh rule of the Ottoman Empire. Migration to America picked up in the 1890’s, but the records of how many Greeks came to America are vague, for the American government classified many of them as Turks or Albanians, because large areas of Greece were under foreign occupation. Many still had a Turkish passport. In the first decades of the 20th.century, almost all the Greek immigrants were bekiarides, bachelors between the ages of seventeen and twenty-two.

Many Greeks who came to Florida were attracted to the Tarpon Springs area in the 1880’s when they were hired to work as divers in the growing sponge harvesting industry. One such Greek was John Cocoris who arrived in Tarpon Springs in 1896 as a sponge buyer for the Greek firm of Lembesis in New York. Cocoris was brought to America from Greece by the company because of his experience and knowledge of the sponge industry. He had lived, as a youngster, with his maternal uncle on the island of Hydra. His uncle was a sponge merchant, and it was from him that John got his training in the sponge trade.

Once the sponge industry was started in 1905, news spread quickly to the Greek islands. Within one year 500 spongers came from the Aegean and Dodecanese Islands. The islanders were eager to leave the Dodecanese because the islands were still under Turkish control. When the Greek Islanders came they “transplanted, adapted and expanded their industry and laid the foundations of the establishment of their “koinotis”—community—according to their way of life so a community within a community began to come into being.”

The Greeks arriving at Ellis Island passed through an immigration depot called Castle Garden, which they pronounced ‘Kastrigari. They waited for several days in limbo while they were processed. Waiting in suspense was traumatic for these immigrants. They could be rejected and returned to their homeland. An expression developed “We passed through Kastrigari” which in Greek means having a shared experience. Once the Greek immigrants entered the United States by way of Ellis Island, they wandered the streets of New York City looking for compatriots who could help them find work. Sometimes through the crowded city streets, they would find a labor agent, with signs which advertised work in the mills, factories, or road gangs. More fortunate ones, who knew countrymen already working in the textile mills or had relatives who owned businesses, such as restaurants went directly to them. The majority of these young Greeks had been rural farmers back home, but only found jobs as dishwashers, laborers, shoe shiners or street peddlers.

In the mid 20th. century The American Government came to the aid of the Greeks who were involved in an internal struggle against local communists. The United States saw this struggle as part of the Cold War. Therefore, provided aid, under the Truman Doctrine, to the government forces to defeat the Greek communists.