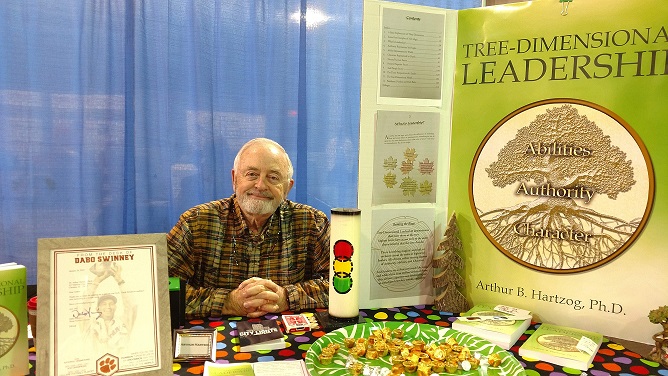 This book nails the concept of leadership like no other.  The initial approach may catch readers off guard, as it begins from a unique angle. Then the author skillfully weaves together every important aspect of this elusive topic within a deceptively simple framework. Everything about leadership is distilled into three dimensions (Authority, Abilities, and Character), which are blended into the features of trees to bring life and relevance to the concept.  Remodeling conventional views, the author uses creative images, humor, Biblical wisdom, and personal experiences to delight and entertain readers.

The author has always enjoyed writing, and excelled at it. At eight years old, he wrote a story about the origin of Santa Claus, and it was published in a state-wide newspaper. In high school and college, he wrote poetry, mostly for the love of his life – now his wife of 54 years. He wrote a Master’s thesis and a doctoral dissertation.  In the Air Force, he wrote manuals, proposals, and reports.  As a college administrator, he crafted policies and procedures, discipline systems, emergency management plans. He has developed multi-media presentations, given speeches, been interviewed for radio and television, and testified before legislative committees.  The time and focus required for writing a book, however, eluded him until retirement. When he sat down to compose “Tree-Dimensional Leadership”, the words simply flowed.  The actual writing took about six months, but from concept to print it was a journey of about fifty-five years. 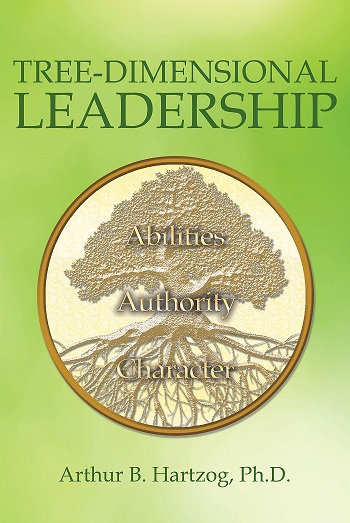 Dr. Hartzog first experienced leadership as a captain in his elementary school safety patrol.  In his small hometown of Blackville, SC, leadership positions were abundant – in school classes, clubs, sports, scouts, church.  Inspired by his first psychology class in college, he began to collect quotes and articles about organization, management and leadership. Over the years, he organized them into topic folders.  Those files grew throughout four years of active duty in the Air Force, and then through forty years of college administration and a stint heading up a public agency.

While working at Clemson University in the 1970’s, the author focused on organizational management (the concepts of goals, objectives, strategies and time management fascinated him).  It occurred to him that no one seemed to apply those organizational principles to personal life.  So he “invented” the concept of self-management, and conducted numerous workshops and seminars for student leaders.  Then he shared those seminars with professional colleagues at state and national conferences.  In the late 1970’s his “Self-Management” concept morphed into the concept of “3-D Leadership”, linking the categories of Authority, Abilities, and Character with the three dimensions of height, width and depth.  At the time, no one else had used the term “3-D Leadership”.  So from the 1980’s through 2009, Dr. Hartzog presented numerous sessions on 3-D Leadership for professional colleagues at conferences all across the country.

During his lifetime, Dr. Hartzog has dealt with a number of difficult experiences, starting with the loss of his father when he was three years old.  Throughout his teens he held more than ten part-time jobs, including picking cotton on his grandfather’s farm, working in his country store, shining shoes in a barbershop, soda jerk and lifeguard.  In high school, he was poised to advance to national competition with a speech he had written, but a head cold and medication resulted in an embarrassing loss.

Dr. Hartzog survived colon cancer at age 49 and melanoma several years later.  His life took an unexpected turn after the cancer diagnosis, but he credits God, family and friends for his survival and subsequent blessings.  He is now a Covid-19 survivor!

Hartzog excelled in high school, both academically and otherwise.  He placed first in the state high jump competition two years in a row, won numerous speech competitions, won various awards, racked up several college scholarships, was in honor societies, and named Top Ten Student and Outstanding Senior at the University of South Carolina.  In the Air Force, he earned early promotion to the rank of major, and received the Air Force Commendation Medal.  Dr. Hartzog has served as president of civic clubs and held leadership positions in his church.

Dr. Hartzog retired as Dean of Students from Spartanburg Methodist College in 2009.  He ruminated on ideas for his book, but enjoyed retirement too much, and let the book languish.  In 2012, he began the book in earnest.  He says at that point it was so easy!  The files were all there, all organized.  It took him only a couple of days to create an outline with chapter titles, and the writing just flowed.  Within three months he had completed about half the book.  Then some intense family problems came up concerning his precious granddaughter, and he was completely distracted for the next four years.

When the problems miraculously resolved, he was able to dive back into the book.  In the process of research, he discovered that several publications had been produced over the years using the term “3-D Leadership.”  Fortunately, however, his concept was quite different from the others.  Still, he needed to come up with a “hook” or model that would highlight the uniqueness of his approach; he also wanted to make it extremely easy to remember the “dimensions” of Authority, Abilities and Character as the basis for all there is to know about leadership.  He needed an image that would constantly reinforce the concepts.

He toyed with the idea of “LeaderSHIP”, using the image of a ship with the sails, rudder and hull representing the three dimensions.  Then he considered the idea of an atom, with its neutron, protons and electrons.  For a while, he worked with the structure of the DNA double helix, with its sides, rungs and axis as a suitable model.  Often, ideas for the book came to him in his sleep, and he would jump up and make notes so he wouldn’t forget them.  One night the image of a noble tree, with its spreading branches, solid trunk and amazing root system appeared to him, and he knew that was it!  That model provided a perfect match for the three dimensions of Authority, Abilities and Character.  Viewing the images of various types of trees – in three dimensions – can help readers recall the fundamentals of leadership and at the same time a host of details.  And trees are pleasant and ubiquitous – everywhere – so that readers will be reminded on a daily basis of the concepts of “Tree-Dimensional Leadership.”

Certainly every author relishes the experience of holding his or her first book as physical evidence of all the ideas, thoughts, effort, love and – yes, money – that was invested in an otherwise metaphysical concept.  So whether this becomes a best-seller or a shelf-sitter, the author has this conversion of the abstract work of fifty-five years into a physical treasure to leave for posterity and his precious granddaughter!