Are Your Characters One, Two, Or Three Dimensional? 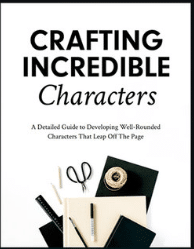 I started writing when I was in first grade.  My first story was about killing a dragon and afterwards, two girls I liked came out of its body.  In fourth grade I wrote little plays about using a spaceship to go backwards in time by flying backwards around the sun like what was done in “Star Trek.”  I was a general along with two of my friends.  In both early writing examples my characters were two-dimensional.   They were relatively simple and straight-forward.  They had some depth but not much.  They were more substantive than one-dimensional characters that many writers write about.  I’ll give some examples of one, two, and three dimensional characters.  Here’s an example one dimensional characters:

The parade was like most Independence Day parades.  Kids were on the shoulders of their parents, patriotic people waved flags, and old war veterans saluted the flag as it passed.  The band members marched smartly in step and played the old standards expected for the celebration of the Fourth of July.  You might call it a Sousapaloosa.

I didn’t write how many people were at the parade on the sidelines or in the marching bands.  The numbers weren’t important.  You might consider the people literary wallpaper.  They have no substance and are easy to replace.  I can’t think of what their faces looked like or even if they had faces.  It was as if they were 1,000 robots doing what they were programmed to do.  Here’s another example of one dimensional characters:

Two lines of men dressed in blue and grey faced each other on the field of combat roughly 100 yards apart.  They raised their rifles and fired at their enemies.  Dozens of men dropped on both sides.  The soldiers that had discharged their weapons knealt and reloaded their weapons as the lines of men behind them released their deadly munitions.

Peter was weary after riding his Harley eight hours straight  over some of the roughest highways on the East Coast.  After stopping for gas somewhere in VIrginia, his knees nearly buckled.  Someone behind the counter in the station saw what was happening and went to the doorway but was waved off by the biker.

“No problem, brother,” said Peter.  “I just need to stretch my legs.”

Peter swiped his credit card and began fueling “Butch” to the top of his tank.  He looked down at the odometer, opened his notebook, and jotted down the number.  After the pump stopped and Peter topped off the tank he wrote down how much he bought.  Not bad, he thought.  He glanced down at his watch, looked up toward the sun for a split second, and smiled.  It looked like he was going to roll into his buddy Hank’s driveway before dark.

I can picture Peter as an average-looking guy wearing jeans and biker boots.  He would be around my age and no threat to anyone.  I’ve seen  men like Peter and consider them neighbors that most people would love having as their neighbor.  But we don’t know that much about Peter except the fact that he loves his Harley he named Butch and riding it long distances.  Here’s another example of a two dimensional character:

“I’m sorry guys, but you know what you need to do.  Open your papers and mark down your answers in the little boxes.  There are multiple choice and true/false questions.  There is also an essay question at the end that you can do for extra credit.  Make sure you write at least 300 words and can show me you understand what you are writing about.

“So that you all don’t skip the bulk of the test in order to do the essay question, you will only be able to do it if you finish the rest of the test.  It isn’t manditory.  But for some of you, it might help pull up your grade for the semester.  Open your papers.”

Ralph is around the age of my cousin Wayne who taught school for thirty years before becoming a part-time teacher in order to keep his health benefits.  If you had a caring teacher in high school you might recognize Ralph.  Most writers write about two dimensional charcters like Ralph and Peter.  They could be considered friends or neighbors that you see in passing and feel you know.  But they are two dimensional.  A reader wouldn’t really know them personally.  Here is an example of a three dimensional charactrer:

Grace was torn mentally and emotionally.  Her mother had told her to be careful when it came to choosing men.  She was still young with two more years of college ahead of her.  She was slight of build but stronger than she looked.  She was the number two team member of the gymnastic team and looked forward to the college regional tournament.

Grace’s team mate, Dick Morgan, was the best male gymnast in the school.  All the women on the team wanted to be his girlfriend.  But for some reason, Grace was his favorite lady and he treated her with respect.

But Grace was also in the ballet troupe and sometimes got to shine as a principal performer.  Her favorite partner, Sam Grant, was also her exercise buddy.  He was a great guy and seemed to love women as much as most guys did.  Around Grace he was on his best behavior and at times seemed eager to express his love for her.

If either man had popped the question, Grace was tempted to say yes.  But she hoped her eagerness to be married wouldn’t indicate that she was ready to have sex.  She was keeping herself for the special time when two people became one flesh as she had been taught in Sunday school.  Maybe both men would have enough sense to wait until graduation time to become more serious about life together with her.

This example showed Grace as an athletic college student who was brought up going to Sunday school.  She is interested in two men.  You might know a woman like Grace and admire her.  She is moral and could have a great future ahead of her as a mother, a dancer, and a Christian.  If I wrote more of the story, readers would get to know her better.  She is someone I would like to know better and could easily see her in church.

Readers want to read about characrers that they would like to be friends with or despise if they are nasty characters.  Sure there are one and two dimensional characters in the story.  But Grace would be fully formed in the story and could lead to more stories about Grace.  Does she do well in the regional tournament?  Does she dance the lead in Swan Lake?  Does she give birth to a little girl named Chloe who is named after the title character in the musical composition “Daphnis and Chloe?”  Writers need to fill their stories with three dimensional characters.  They should be people that readers care about as if they are members of their families.

Fine writers create fully-formed characters that readers love to read about.  President Teddy Roosevelt has been written about by many writers and has been presented in movies and TV programs.  He was shown in “Rough Riders” as the man who led his men against the Spanish in Cuba.  He was played in another movie by Brian Keith who took on kidnappers of a woman and her child in North Africa and nearly called out the Marines to save them.  He was bigger than life and worthy of many stories that readers and audiences would enjoy.  No writer in his right mind would want to turn him into a two dimensional character unless it is a biography about him or he is mentioned in “Monster Quest” since he heard the screams of a bigfoot while he was out west

Balanced writing has one, two, and three dimensional charcters.  One dimensional charactrers are like filler ingrediants that you see listed on the side of a box of cereal.  They aren’t needed to make the cearel taste better.  But the next time you eat some Captain Crunch, think about it looking as dull as shreaded wheat.