A Myriad of Emotions by Nicki Snyder 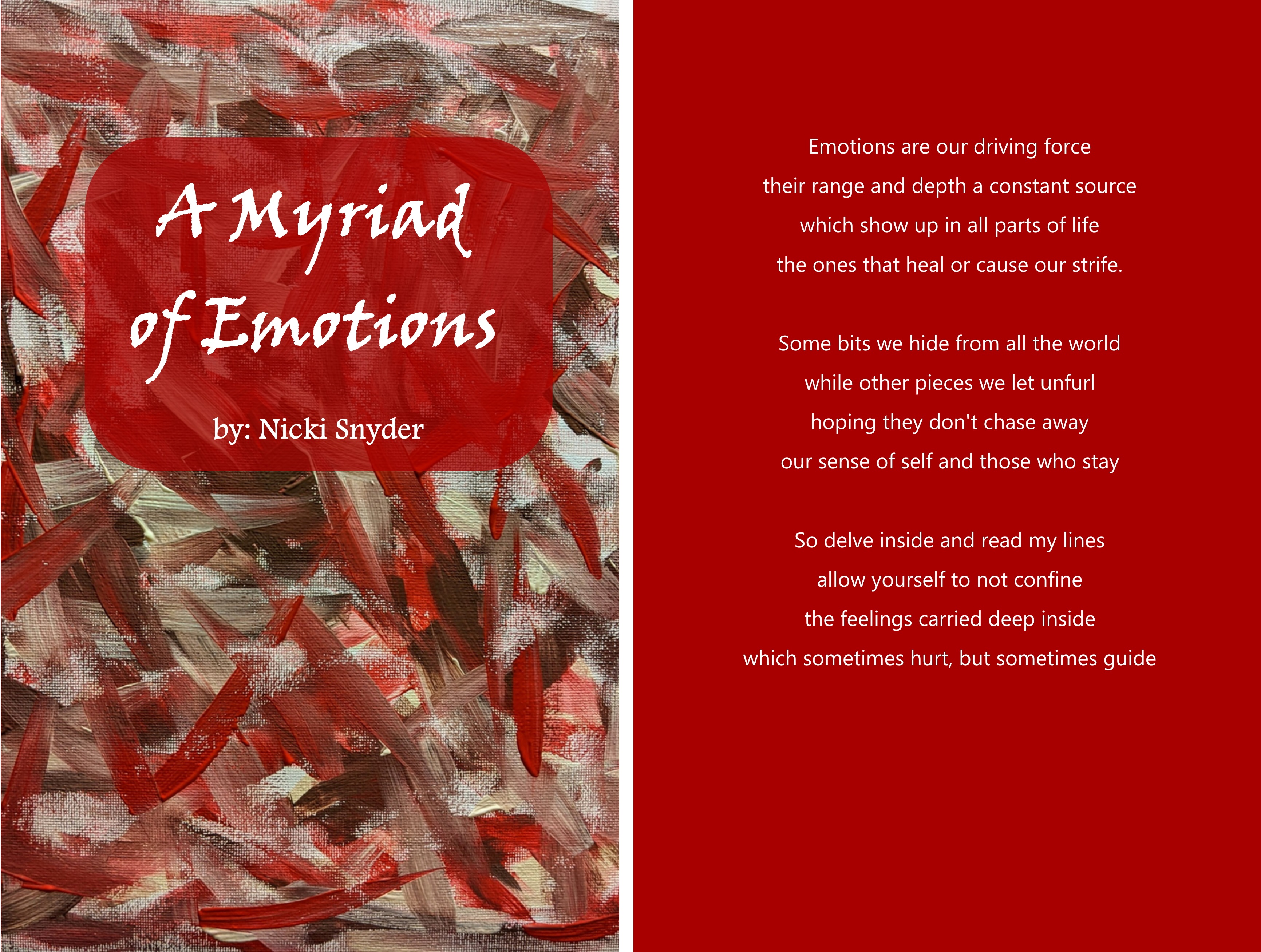 A Myriad of Emotions is the fifth book I’ve published, but my first poetry book.  Prior to its release, most of the books I’ve written have been geared towards children.  I have even been lucky enough to illustrate another author’s children’s book.

Though A Myriad of Emotions is my first poetry book, I have been writing poetry for more than a decade, but not seriously and not often.  However, that changed when I joined a local writers’ group a little over two years ago.  Being around other writers was the spark I needed to begin writing in earnest.

Since joining a local group, I have published a collection of short horror stories, a book of cloud photography that is accompanied by whimsical illustrations, and A Myriad of Emotions.

Our poetry group moved online in 2020, as many groups and companies did.  This meant we could meet more often.  Instead of once-a-month meetings, we started having them once a week.  I was even more invigorated to write because of this.  I wanted to push myself to have something new to read each week.  Sometimes I dug out old poems to clean up, and sometimes I researched different poetic styles to try.

A few of the poetry forms I used are paradelles, haikus, and free verse.  One poem in the book, called “A Smile Upon Her Face”, was challenging, but one I’m quite proud of.  I wrote that poem in the style of “The Raven” by Edgar Allan Poe, and surprised my poetry group with it.

With all of the online meetings, by the end of summer, I realized I had enough similar poems to put together a book.  My central theme was emotions – happy, sad, irritated, worried and hopeful.  I paired several poems with illustrations or photographs I took.  I felt that this added another depth to the poem, and allowed me to incorporate other mediums of art I dabble in.

Many of the poems without out drawings or photos feature an annotation beforehand.  I use these to give a little insight into the poem or the style I used.  I vary the style as much as I vary the emotions conveyed, since humans possess a wide range of emotions.

My target audience for this book would probably be considered teens to adults of all ages, but truthfully, I write for me.  I see myself as my main audience. I feel that a writer should write what they like, and not try to fit someone else’s narrative.  If I don’t like my work, I won’t share it.

Of course, a huge bonus would be for other people to like my work as well.  I think most writer’s dream about someone enjoying their work as much as they do.  I’d love to have something I write resonate with someone else.  It would be wonderful news to know that a reader found my poems relatable.

My next goal for A Myriad of Emotions is to branch out from Amazon.  I’m in the process of working with D2D so I can have my book available on additional platforms including bookstores and libraries.  I used to dream of seeing a book I wrote in the window of a bookstore, and now I’m one step closer to that dream.

Right now, I plan to have another poetry book out in the next year or two.  Most of the poems are written, but they still need a little polish, and some illustrations to go along with them.  In the meantime, I’d love to grow the number of people who have read my current works, and maybe inspire other writers to try some of the many styles of poetry that I’ve laid out in A Myriad of Emotions.

My heartfelt thanks to Authors’ Lounge for asking me to write about my latest book.  I really appreciate this opportunity to let potential readers know that my book is out there for them to read.