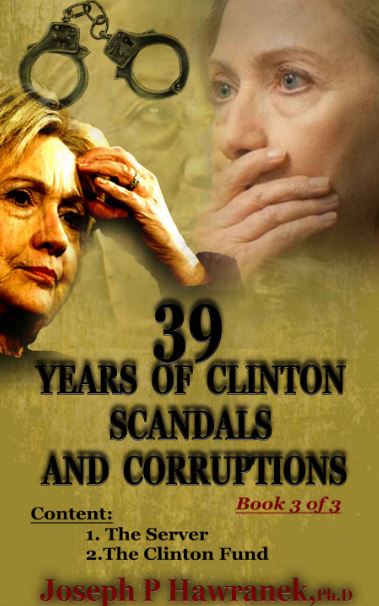 Book 3 ABSTRACT 39 YEARS of CLINTON SCANDALS AND CORRUPTION BOOK 3 OF 3 – 1977 TO 2016 In this book, we have two major scandals that occurred during the Secretary of State tenure of Hillary Clinton. Both involved the very security of this nation. Both required Hillary’s active involvement to facilitate the scandal.

The book3of3scandals are called 1. THE SERVER – which concerned the private server in her home to use as a private email system by her and her staff when she was on official duties as the Secretary of State. 2. THE CLINTON FUND – This private charitable foundation is under criminal investigation by the FBI and was used as a “pay to play” operation by the Clintons. The fund grew to $2 billion shortly after she left office. THE SERVER The law is clear and simple with respect to classified material and “Intent” is not mentioned.

If you do not handle classified material with care and keep it on government safe equipment, you have violated the law, which is a felony. The mere act of being careless is the felony. Intent is not even relevant. Clearly, Hillary violated the law and committed multiple felonies. She put classified material on unsafe insecure servers, PDAs, laptops and iPads. Further, she outfitted her staff with the same equipment and they communicated with each other as if they were just friends – not representatives of the U.S. Government with state secrets to protect.

Against the oral and written advice of Department of State (DoS) security people, Hillary used PDAs on foreign travel that exposed her conversations and others related to state secrets open for disclosure. She had at least two active attacks on her server that she admits happened. When she left public office, she did not return government emails nor the PDAs (13 were missing) per the law and the State Department regulations. This is another felony. Upon action of a FOIA and a lawsuit, the state department retrieved 30,000 of the 61,000 emails 22 months after she left office.

This was the first time that it was divulged that she was working from a Private Server. The choice of whether the email message was private or not was made by her private attorneys not the DoS attorneys. In the 30,000 Emails returned, 110 emails contained top secret, secret and confidential material that was resident on her PRIVATE server. Never in the history of the U.S. has anyone done this before. Her claim that others did this is another Hillary “Lie”. She is guilty of multiple felony violations. The FBI Director, James Comey, said that she was not guilty since “she did not have intent but was very careless”.

This is nonsense but fact. I note the FBI Director James Comey was the Special prosecutor that let the Clintons off with “no laws were broken” on Pardon Gate – see book 1 of this series. The point here is that Hillary is intelligent. She knows that there is a different law for the elite. This is how it works. Review what really happened and which laws were broken by reading the book. As Secretary of State, she did not protect national assets and put people’s lives in danger. Some undercover agents might have been killed. She protected herself by putting her transactions on a private server and designating her public transgressions as “private emails”.

She was more concerned with cover up than doing her job as Secretary of State. THE CLINTON FUND The Clinton fund, on its surface, is a sophisticated tax avoidance scheme. Its components are two charitable trusts. One is in Canada and the other is in the United States. The Canadian charitable trust is a partnership with a billionaire Frank Giustra and Bill Clinton. The Canadian charity accepts and funnels contributions for the Clinton fund in the U.S.

They bundle their contributions and send a single contribution to the Clinton fund. The original contribution is tax-free in Canada and the bundled contribution to the Clinton Fund in the U.S. is tax-free. The real purpose of two funds is to hide names of contributors and to allow plausible deniability. In fact, this is a form of money laundering. All money laundering focuses on source of funds and destination of funds. In this instance, the source of funds is billionaires, oil sheiks, third World governments and very rich individuals.

One might claim that these are just charitable contributions. However, some contributions have hit in excess of $100 million. In this contribution spectrum, the originator wants something in return. In this instance, it is probably access to Bill or Hillary Clinton. If the Clintons are in office, then the contributions go higher. It is difficult to prove “pay for play” schemes such as this. However, the FBI is investigating the Fund for criminal acts. We examined two transactions in this book. One was for a uranium mining operation in Kazakhstan and in the U.S. and another were Hillary’s efforts to stop oil Fracking in this country.

URANIUM – Frank Giustra instituted the uranium mining operation with UrAsia after Bill Clinton introduced him to the president of Kazakhstan. Within two days of that introduction, Frank Giustra received a contract that allowed him to mine in Afghanistan if he paid a royalty fee of $450 million. He owned an unknown shell company that was called UrAsia. UrAsia owned 20% of all U.S. uranium mining. Facts now show that as soon as that contract was completed by paying the $450 million in December to the President / nation of Kazakhstan, Bill Clinton received a $151 million contribution from Giustra for the Clinton fund. Then, Frank Giustra sold his company to Uranium One who promptly sold their company to MRZ. MRZ in turn, was sold to Rostrum, the wholly owned Russian State mining firm. In this way, Russia now controls 20% of U.S. uranium production.

Thus, all the UrAsia uranium mining in Kazakhstan and 20% of the uranium mining in the United States is now controlled by Rostrum – a nationalized Russian firm. An interesting fact is that Hillary Clinton, as Secretary of the State, approved this transaction before she left office. After the transaction was completed, the Clinton foundation collected $151 million in contributions from Giustra. FRACKING – The second area of interest that was affected by Hillary Clinton is fracking. Initially Hillary Clinton was for fracking and now she is against any fracking in this country.

After stating her position for fracking, the Clinton fund received $100 million as a donation from the oil sheiks in the Mideast. As soon as the money was in the Clinton fund, she switched sides and promptly changed her position and is now anti-fracking with her comments and support. It is clear to me after reviewing what happened in the uranium example as well is in the fracking example that the Clintons are a “pay to play” team where they must be paid to use their in office governmental influence to accomplish something for the donators.

They use the Clinton fund to take in tax-free “pay” for their expenses. The fund reportedly has 2,000 people at work around the world. The highly visible ones will come with Hillary if she wins the Presidency. This is where she “hides” her advisors. Is this legal? The FBI has an ongoing criminal investigation focused on the Clinton Fund. The results are not in. I have no idea what they will conclude now that I have seen the results of what FBI Director Comey concluded on the security of national classified assets.

She is and was clearly guilty of felony violations multiple times but Comey gave her freedom because committing the felonies was not her “intent”. Intent is not mentioned in the law. It is a stop sign. Go through that sign makes you guilty. I believe that if Hillary served in any office, especially the Presidency, it would be dangerous for this nation. Her actions clearly show that she believes that she is above the law and regards actions that would potentially harm this country as secondary if she can make money at it doing it.

Read the analysis – I present the facts including the law and her violations – and then you decide. Is she fit to be President given her obvious use of the Secretary of State Office to make money for herself and Bill Clinton? She was instrumental in taking $230 millions in “donations” into their Clinton fund during her administration. The Clinton Fund is where they get their travel and business expenses including reelection campaign funds. It is both personal and business. It needs an audit.

RECENT POSTS HILLARY CLINTON BRIBE THAT SHOULD JAIL HER_fbjh012519 WHY IS SOCIALISM BECOMING POPULAR ?_fbjh012219 Treaty Of Westphalia And The Mideast HILLARY CLINTON AND THE DEEP STATE_fbjh10318 IMPLICATIONS OF NEW AUSTRALIAN LAW THAT FORCES INTERNATIONAL PROVIDERS TO REMOVE ENCRYPTION PROTECTION THE CRASH: WILL IT HAPPEN AND WHEN THE FIVE EYES BERNIE SANDERS MEDICAL CARE FOR ALL Copyright © 2016 Raven Publishing All Rights Reserved Privacy Policy – Te