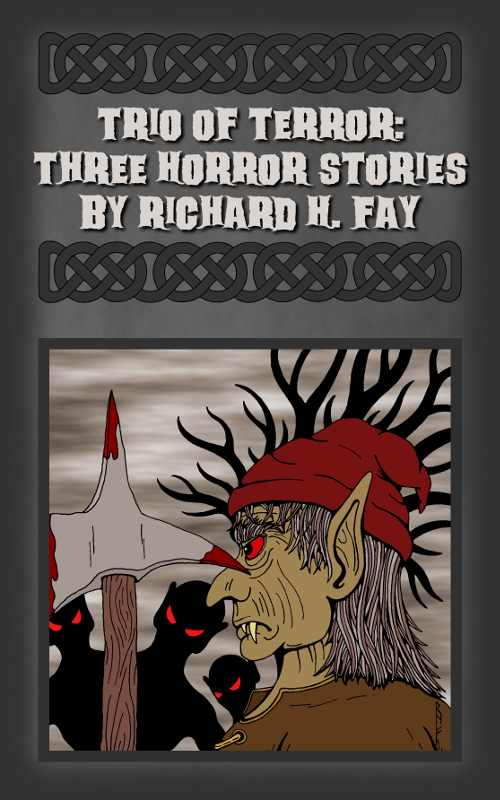 Authors’ Lounge has graciously invited me here to talk a bit about my little collection of horror stories. Trio of Terror: Three Horror Stories by Richard H. Fay is a booklet containing three of my previously published horror tales, all in one place. The first story, “The Redcap of Glamtallon”, features the terrifying fate of two paranormal investigators when they encounter something much more sinister than a ghost while investigating a haunted Scottish peel tower. The second, a dystopian microfiction piece entitled “From Within the Earth”, follows the rise of a strange toxic sludge as it engulfs humanity. The third, a grimly dark tale called “Those from the Shadows”, presents a new twist on vampire lore as an occultist summons bloodthirsty shadow beings.

My inspiration to write these stories came from several divergent sources. A love for the darker side of fairy lore, a passion for medieval history, and an interest in those ghost-hunting television series, all served as inspiration for “The Redcap of Glamtallon”. Concerns over what humankind is doing to the planet, as well as a fondness for weird fiction, sparked the creation of “From Within the Earth”. The works of H. P. Lovecraft, especially his tale “From Beyond”, heavily influenced “Those from the Shadows”, although my tale follows a more occult route than a cosmic one. I also threw in a vampiric element for good measure. Reported real-life encounters with paranormal shadow people and folkloric accounts of nightmare-inducing blood-drinking spirits known as the alpe served as inspiration for the shadow beings themselves.

The target audience for my booklet is any fan of horror, especially classic horror tales. I write the sorts of fiction I read, and I read a lot of classic horror. As a published dark poet as well as a writer of prose fiction, I also hope that any lover of language, any aficionado of artistic writing, would appreciate my dark fiction. At times, my experience as a poet does show through in my prose. That being said, I suspect anyone looking for a quick-but-spooky read would enjoy my three horror tales. My wish is that readers of all sorts feel the eerie touch of the otherworldly and experience chills of dread  while reading Trio of Terror.

I might eventually make the booklet available elsewhere (I’ve considered it, anyway), but at the moment, it’s only available through Amazon.

In addition to being a published poet and writer of short fiction, I’m also an artist/illustrator and writer of nonfiction articles. A number of my cover artworks, interior illustrations, and nonfiction articles have appeared in various publications, both print and online. As a matter of fact, I did the cover artwork for Trio of Terror myself. I’m quite proud of it, actually. Being my own cover artist means I can use exactly the sort of art I want to use. In this case, I think the classic look of my art matches the classic feel of my writing.

I want to thank Authors’ Lounge for giving me this opportunity to talk about Trio of Terror. Much appreciated!

For those who are interested, here’s a link to the book over on Amazon:
Trio of Terror: Three Horror Stories by Richard H. Fay

And here’s a link to my Twitter profile:
@RichardHFay1