The Ravings of a Madman: ~ A glimpse into my broken mind 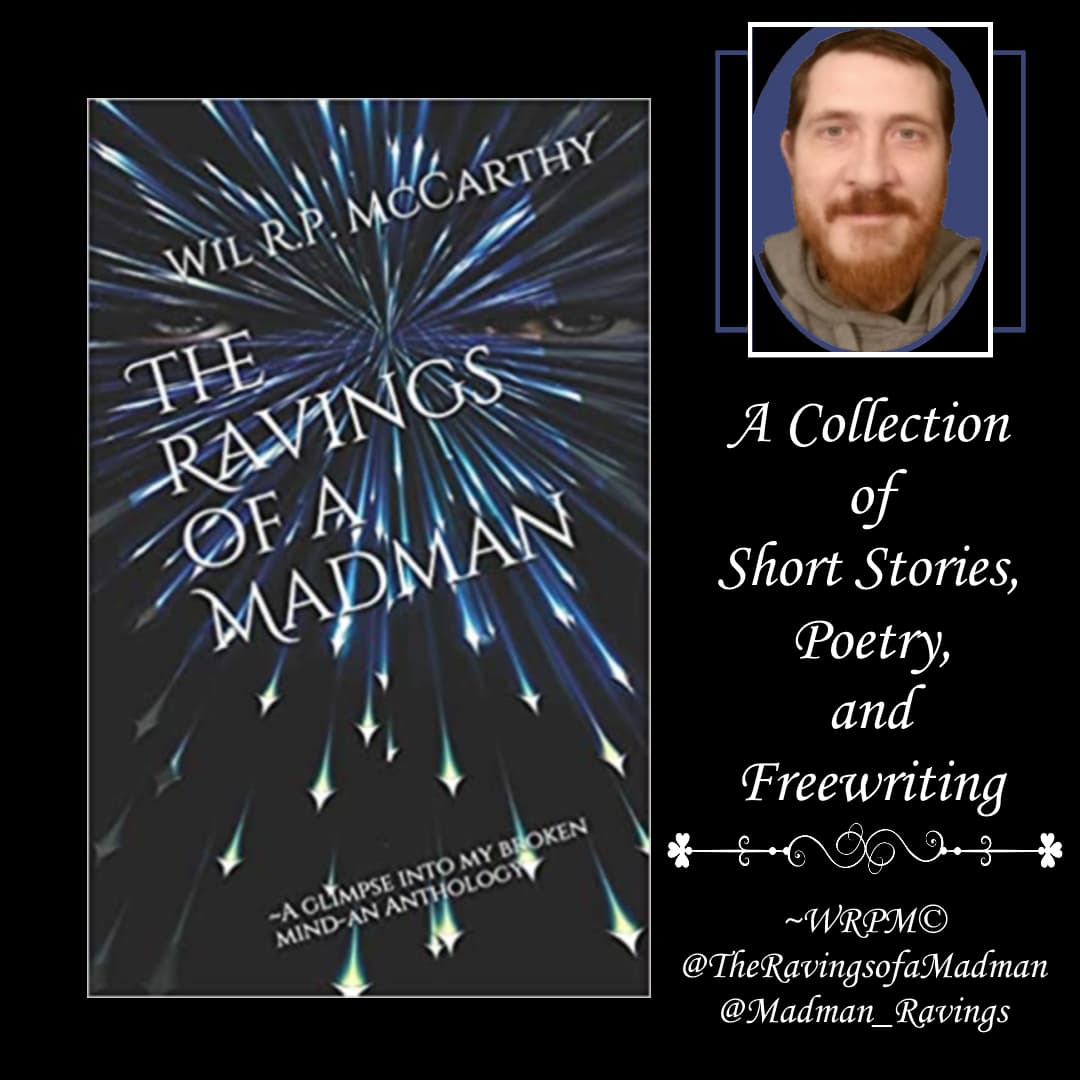 I would like to thank Elizabeth Schultz and the Authors’ Lounge for the opportunity to share my work and possibly grow my writing. My book “The Ravings of a Madman: ~A glimpse into my broken mind,” is just that. I have suffered from chronic Manic Depression since the age of twelve and Undifferentiated Schizophrenia since my early twenties. It is an anthology of short stories, poetry, and free-writing which I have written in order to cope with my illnesses.

My book, as I said, has three parts. The first is my short stories, these are my escape. How I take my mind somewhere other than the here and now. I think I enjoy writing fiction more than anything else. Creating something from nothing is a great feeling. The second is my poetry, it is a collection of haikus, 9words3lines, ten-word-stories, and poetic prose, all of which range from coping with my depression to my feelings of heartbreak to the want of or desire for love. My poetry has become my most constant outlet. The third is my freewriting, this is the most personal part of my book. It is ongoing journal-style prose and was originally posted on my personal Facebook page. I wrote it to cope with my illnesses. It is very dark at times but it is also very real.

My mother was the driving force behind me collecting all my freewriting together originally. At her insistence, I put it all in one place, and eventually because I wanted to share beyond my own friends, I started my Facebook page The Ravings of a Madman. https://www.facebook.com/theravingsofamadman

I would be eventually found by another writer who started to share my work and the first real growth of my page began. I realized I had a voice and others wanted to listen and that I was helping others with my writing. I found myself growing as a writer and poet. I found myself wanting to publish and try to find a larger audience.

My book is available on Amazon https://amzn.to/39t1MDD in both paperback and Kindle editions.

I post daily onto all of my social media sites- mostly poetry, but I do share the occasional short story which I link from my WordPress site. I am still a growing writer/poet and I hope to continue to be able to learn.

A little about me and why I write:

My father was US Navy and moving up and down the east coast in my youth created a sense of isolation. It became more intense after the sudden passing of my older brother. After years of quietly fighting my demons, I started to let them out. I tried telling people at first, but very few could handle the dark conversations. After years of attempting, I found myself in front of my PC.

It was a sleepless night that this all started. It felt a desire to let it out, to release the pain that was weighing down upon me. To share a part of me long hidden. With tear-filled eyes, I wrote my first piece of freewriting. Full of fear my finger hovered over the send button, but I overcame it and let out into the universe my inner workings. I fell asleep twenty minutes later which to my insomnia driven mind was a miracle.

It is hard to explain the sense of self-worth that comes in a life that has been so bereft of it. To have someone tell me something I wrote, what I have thought of, or been through has helped them. One of the first things I ever wrote was in response to someone telling me they were having suicidal thoughts and them asking me discreetly how I handled it all. The next time I saw them after I had posted about my night on the ledge, they thanked me and told me it had helped them. To know I made someone look at their darkness and see a bit of light. That I helped someone cope and see they are not alone. That is what fuels me. What started as just a need to outlet my pain has grown into a desire to share myself with the world. I want other people to see they are not alone in the dark.

I would hope those who read my book could take away from my writing a deeper understanding of mental illnesses. I know everyone is fighting their own battle and even though mine is not the same as another. I hope that by sharing it, people can find a deeper understanding or appreciation for the many invisible illnesses that millions suffer from each day. I hope people who do suffer may read it and see that it is ok to not be ok. To see their pain in a new light and find an understanding within themselves. I dream that my book will help others and I hope to put together more books with my growing body of work.