ONE UNDER by Pete Thron 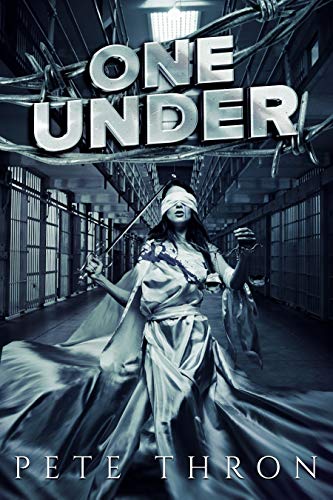 I would like to thank Readers Magnet for letting me write this article.

My name is Pete Thron. I was a NYC housing cop back in the later eighties and mid-nineties, during crack, the cocaine explosion in NYC.  I grew up in Long Island New York and was a up and coming baseball high school player. I received a scholarship to play at Downling college. The fall of 1983 I had a tryout with the new expansion team The Seattle Mariners. I did well enough to get signed. I called coach Devito and he was able to negotiate a deal where I would go back to Long Island and play in the Knickerbocker Tournament and then fly back with him to sign the contract. My dream to play in the MLB died that weekend due to a collision into an outfield fence which destroyed my throwing arm.

Hence, I rolled right into my second love in life and became a NYC housing cop in 1987. After the academy I was assigned to East Harlem NY to begin my street training as a housing cop. I was a naïve 22-year-old kid from the Island and hit with a tremendous culture shock. Crime ran rampant where I patrolled, but I was fortunate enough to have been trained by cop who had seen his share of war in Vietnam and on the streets of Harlem. After my field training I was sent to the drug ridden Alphabet City in Downtown Manhattan. Mayor Koch had declared war on the drugs and formed Pressure Point where every drug offender and dealer went through the system. I became obsessed with making drug collars. After my six months at pressure point, I was assigned to PSA 6 in the heart of Harlem. At that time, it was considered the Belly of The Beast due to the heavy drug traffic and violent drug gangs.

Harlem became my second home away from home. During the five years there I became a arrest machine and was racking up hundreds of arrests and medals. The problem was the Housing police brass didn’t like that I was making all those arrests off the project grounds. I was put on the IAD (Internal Affair Divisions) radar. They’re the cops who investigate the cops who are break the rules, procedural and criminally. I’ll admit I broke rules but never anything criminally. It was at that time I became totally obsessed with getting my gold shield and getting into the detective bureau. It was that obsession that became my downfall.

In 1992 I went down to ATF (Alcohol Tobacco and Firearms) bureau in the HIDTA task force. I would become what is known in the federal agent’s world a Cowboy. The type of cop/agent who’d stop at nothing to get the bad guy and the job done. I learned the proper ways of doing criminal investigations and trained with the best agents in the country. When my time ended with ATF I went back to my command under the impression I was being promoted to detective. I was told by the brass I’d be in the bureau within a few months. I was put into the plainclothes unit where I was racking up a lot of collars (arrests).

During a buy and bust that went awry I was accused of crimes I didn’t commit. I fought it all the way to the criminal courts. I even took the stand in my own defense. The corruption that ran throughout the housing police ‘s powers to be (the police brass) threw me to the wolves. That corruption went all the way through the criminal courts, dirty judges and DA’s making backroom deals. My main problem was I was put on trail during the Mollen commission, and they were gunning for any cop who caused trouble, or they thought was a troublemaker. I lost the war but won the battle and was only convicted of E nonviolent felonies which I should have gotten probation for but was sentenced to 2-4 years in state prison in 1997. I would be serving time with the violent offenders I had once put behind those very bars.

Prison was the most difficult time in my life. Every day I had to be on the lookout for an inmate that might want to kill me or seriously injure me. I trained heavenly inside and made my body into a well-oiled machine. It took me several months to train my mind. The thought of suicide was in my head the first 6 months every day. I was granted parole in late 1999. My struggles with obtaining gainful employment still plague me to this very day.

I was inspired to write the first book End of Tour while I was inside prison. It took me twenty years to write the book. I didn’t want to put my young children through hell by writing it when I had gotten out. That is also why I never tried to fight my case at the next level. I didn’t want to put my family through that hell again. I have been told I more than likely would have won my case if I had pursued it at the next level of appeal. In my mind it wasn’t worth dragging my family and friends down that road again.

My target audience at first was Law Enforcement and the readers who like criminal procedure books, but it has grown to other genre readers. I hope the readers get out of my two books End of Tour and One Under is that police officers are human beings and corruption comes in all different forms. There are corrupt judges, DA’s, police, and politicians. Basically, in all walks of life.